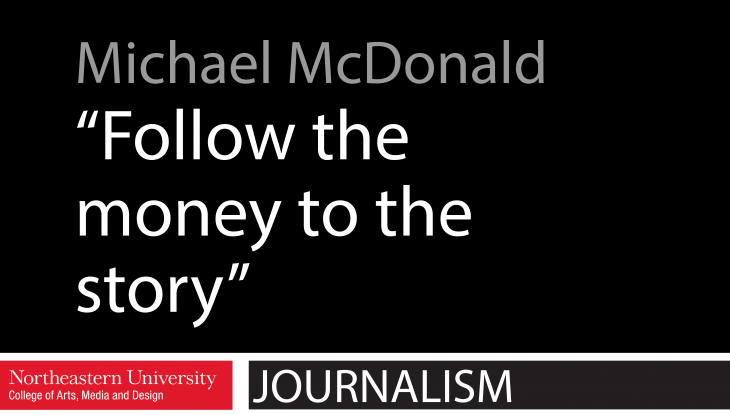 Never throw away anything and always be aware that small tips can lead to big stories.

That is the advice of award-winning Bloomberg reporter Michael McDonald, who has written a series of stories about how Harvard has invested its money — sometimes with disastrous results.

McDonald, who has been with the business news organization for 14 years, and is now on the investment team, spoke to Pizza, Press & Politics, Northeastern University School of Journalism’s lunchtime speaker series, on Jan. 17.

McDonald focuses mostly on Harvard because of the size of its endowment and the importance of the university. McDonald has published a series of stories uncovering less-than-clear investment strategies, some of which have put Harvard’s ethics in question.

For instance, he focused on how Harvard Management managed to lose $1 billion in a natural resources investment in South America.

The story began when he received a tip from an environmental activist. Together, they worked to uncover investments Harvard had made in Brazil, where they were displacing local farmers and managed to lose a big bet on natural resources, mostly on natural gas.

On another story, he received a phone call from Lawrence Summers, the former Harvard president and then a top White House official.

McDonald, who happened to be watching one of his favorite shows, “Mad Men,” was startled to get the call. He had originally called Summers as a mere courtesy, to let him know about a relatively minor story that was running. Before he knew it, Summers was spilling inside baseball stories about Harvard Management, with names.

Michael, asked what advice he had for young journalists, suggested diving deep into any and all public documents. Never throw away anything, Michael said. Every piece of paper has valuable information – i’s important to keep it and organize it in a useful way, he said.

“You have to find a way to break down the information in order to understand it,” McDonald said. He organizes his work using Excel spreadsheets, which was helped by his educational background in economics.

The key documents in his research have been tax filings, which are intricate and complex documents, where he found good stories buried in the footnotes. I’s important to write basic stories, too, since, he noted, “get something out there and the rest will follow.”

Andres Pinedo
Andres is a journalism student at Northeastern University.