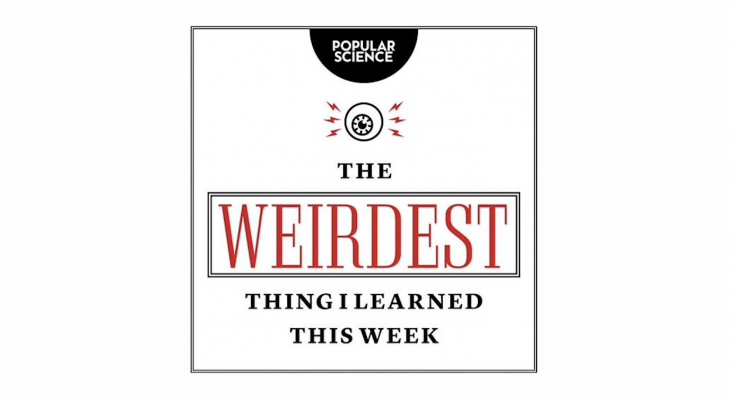 These are just three of the many weird things recently addressed in a podcast titled The Weirdest Thing I Learned This Week. Currently in its third season, the show is a wild ride of strange bits of knowledge that the editors and writers at Popular Science come across during their normal reporting for the magazine.

Host Rachel Feltman and other editors began to produce The Weirdest Thing I Learned This Week after being inspired, in part, by Feldman’s rather silly assumption that everyone obviously knew what a coffin birth was (Hint: it’s exactly what it sounds like, a postmortem birth as a result of gas build-up in the deceased’s body.) The Weirdest Thing uses podcasting to have accessible conversations about surprising and shocking tidbits like this to bring their audience in, teach them something new, and perhaps give them a break from the doom and gloom of a standard news cycle.

Feltman spoke with Storybench to discuss how the podcast she hosts operates at PopSci and its place in the world of science journalism.

What was the origin of The Weirdest Thing I Learned This Week?

I’ve always been a big fan of podcasts myself. I wasn’t a super early adopter, but as somebody who stares at words all day, I started to find a lot of value in getting entertainment and information without having to continue to stare at a screen or paper.

One of the things that got me into science journalism was that I love learning new stuff, and I’m kind of a sponge. I like surrounding myself with other people who also do that, which has been a big part of me building the science team at PopSci.

[Creating the podcast was] kind of realizing I had a lot of factoids that I didn’t think people would be interested in because I thought surely they had already come up for them before and everybody else on my team had things like that. We get so interested in these really niche subjects while we’re reporting that we kind of forget that a lot of the stuff that doesn’t make sense to share with our readers in articles or to be the focus of a whole article.

What if we just shared those kinds of stories?

What is the mission?

I want to give people excuses to be interested in learning new things, which has always been one of my big goals as a science writer. I think everyone loves learning whether they know it or not, and I think the best way to surprise people into learning a bunch of new stuff is to just kind of shock or intrigue them, and make them think that it  doesn’t count as an information download because it’s so wacky.

As a science journalist, one of my favorite things to write about is poop, which has always been true. It’s a thing that used to be much more true.

When I was at the Washington Post, I was writing like three stories about serious poop-related science a week. I have the sense of humor of a 12-year-old, so that’s one thing, but I also genuinely believe that something as universal as poop is something that so many people find either gross or hilarious or both. Bodies are bizarre and funny and [we are able to get] people hooked because it’s ostensibly a story about like selling your poop for $13,000 a year but before they know it not only do they know what fecal transplants are for, but they now know a bunch about this debilitating disease, a C. difficile infection.

I feel like The Weirdest Thing is a very natural progression of what my goals are for Popular Science as a publication: really hooking people with the weird stuff and empowering them to educate other people with these cool stories.

Also, it’s just fun. There’s a lot of stuff that’s not fun these days, and The Weirdest Thing can definitely get into some heavy topics, but I like that it’s very often just silly.

How has The Weirdest Thing community grown in its 2+ year existence?

I’ve learned a lot about podcasts and podcast producing. We have a lot of talented people at PopSci who do a little bit of everything, but none of us specialize in audio production or in selling or marketing a podcast. I don’t think most of our listeners realize how much we do on top of making the podcast, which is good.

Obviously we have the benefit of the PopSci social media platform. We had a lot of people to push the show out to, but I was still really pleasantly surprised by how many listeners we had just to start out.

I’ve been really listening and talking to them on social and the live shows have helped a lot. We really aspire to do some [live shows] outside of New York, so as soon as we can figure out the logistics for that we will hopefully hit the road at some point. It’s a natural extension of the show and I think it comes across to a lot of our listeners that we genuinely wish all of our listeners were in the room having these conversations with us.

Occasionally we do get story ideas from the Facebook group or from Twitter, which is super fun. Luckily we’ve very rarely had to correct or consider correcting anything, but the one time we did it was a listener being like, “Hey,” and we were like, “Hmm, interesting point.”  Often those messages we get are just pedantic, but we appreciate them anyway because we do always want to make sure we’re being accurate.

[They] certainly encourage us to keep being our weird selves when they express appreciation for the show. A lot of times I’ll have a fact where I’m like, “I don’t know. This was probably kind of a stupid story. I don’t really know where I was going with this,” and then hearing people get excited about it, I’m like, “Oh, I guess not. I guess I should keep being weird.”

Have you or the podcast received criticism for any reasons?

A: The only kind of criticism we get is generally about like how our voices sound and how we’re disrespecting the founding fathers, and I can say that has zero influence on our show.

Popular Science is not a political magazine, we’re not partisan, but also as a science journalist and editor it’s very important to me that issues that aren’t actually partisan aren’t treated as such, in terms of things like, people being treated like human beings and recognizing the systemic biases that exist both in the academic world and research and outside of it, climate change being a thing.

From my perspective, when we have the data to back it up, we’re not going to pretend it’s a two sided issue. We’re also people, you know. We care about being measured and using evidence based reporting and I think that comes across to listeners who don’t come in looking to get angry.

What do you recommend for those interested in science journalism? Podcasts?

Find the really niche things that are super interesting and  not the things you write about every day.

I would recommend that people not be afraid to really get in the weeds on things that they think might be super esoteric or not interesting to most of their peers, because that’s the point: you get to be the person who makes people interested in that thing.

My advice for podcasting would just be that it’s way harder than most people assume it is. It’s not that I would discourage people from giving it a try, but I would say give it a try.  It’s something that ideally you’re going to do with a team and with a lot of advanced planning and after gathering some resources.

Finally, what is the weirdest thing you’ve learned, maybe not this week, but perhaps this month?

The episode we have coming out tomorrow (Oct 16) is actually about my own experiences with face blindness. It’s way more common than is generally thought.

We recorded with Helen Zaltzman from The Allusionist, and she told us a bunch of facts about the origin of the word bisexual and all the things that has been used for throughout history. I learned that the word bisexuous used to be very common and has fallen out of fashion and I endeavor to bring it back.

So, that was the most useful thing I learned this week: that bisexuous is a word I can use.

Ruth Hunger
Ruth is a graduate student at Northeastern University’s School of Journalism.