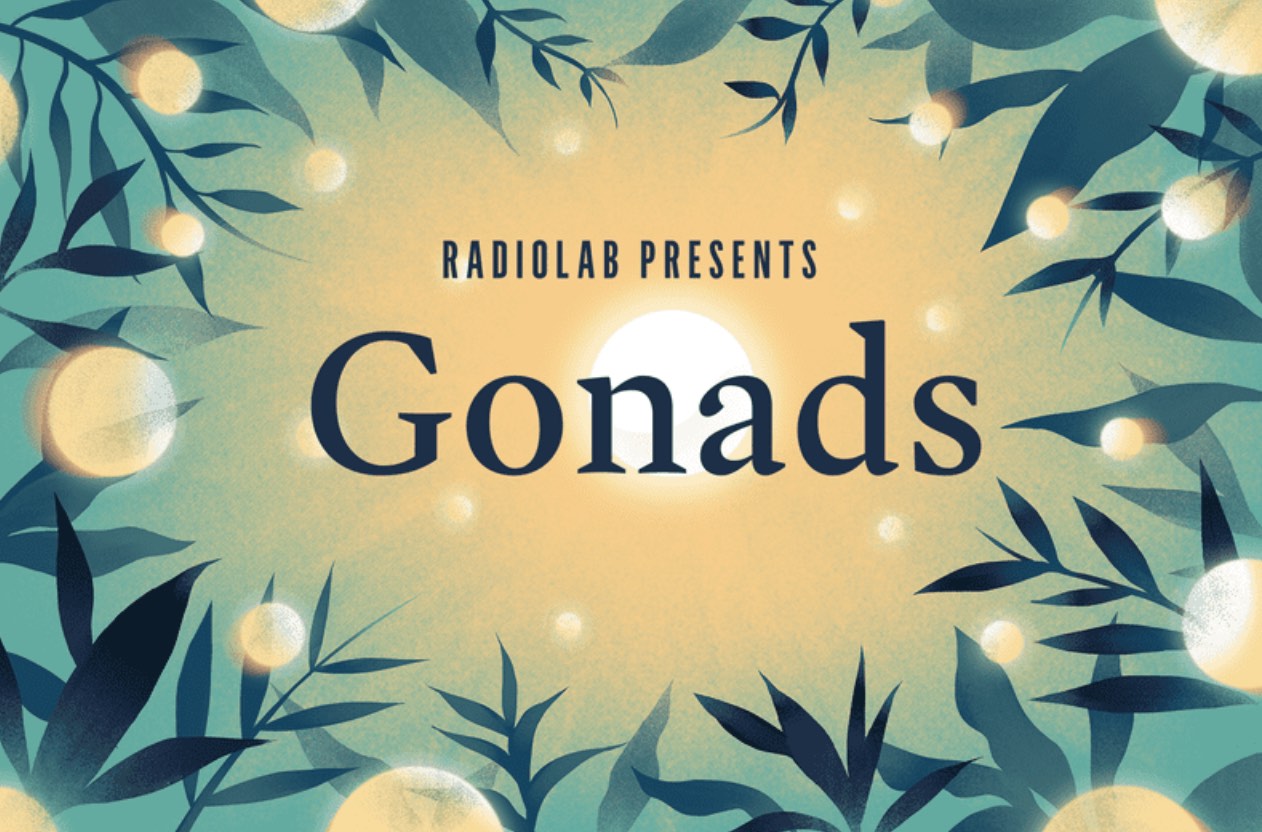 How Radiolab produced “Gonads,” a podcast series on human reproduction

Listening to Radiolab’s “Gonads” series is a lot like hearing a science documentary about human reproduction and having an epic narrative play out in your mind’s eye. The podcast series, which features an ethereal soundtrack, has six parts that cover scientific and personal stories on ovarian tissue freezing, sex chromosomes, sex determination, sex organs and identity. The series unpacks complicated scientific terrain – including the great migration of primordial germ cells or the finer points of sex education – in an accessible and vibrant way.

Radiolab producer Molly Webster led the reporting and hosted “Gonads.” Since the series was published in 2018, Webster has given a TED Talk about the history of sex chromosomes and was featured on the TED Radio Hour episode “The Biology of Sex” earlier this month.

As a radio journalist, Webster has multiple roles during a single interview. She is the reporter who is asking questions and she is the first listener, thinking about how other listeners will react. As a producer, Webster needs to be cognizant of whether the interview content will be helpful for the editing process. This might involve asking a scientific expert to walk through a biological process using visual details. That “tape,” as radio producers call it, can then be used to create an immersive audio scene – “movie-making,” as Radiolab likes to call it.

“You’re also just human,” said Webster. “How am I reacting to this? How am I feeling about this? Where is my natural curiosity taking me that the reporter/producer part of me doesn’t care about? It really is a complex moment – interviewing for radio.”

Storybench spoke with Webster about the making of “Gonads” and how she reported and produced a patchwork of audio stories about human reproduction.

For a topic that seems so hard to grasp – sex chromosomes, sex determination, reproduction – was it a challenge to find these very human stories?

When you’re in the editing stage, what happens if there are heavy science explanations? How do you sort of spice them up or make them more creative, more “visual”?

There’s a step before that, which is when you’re in an interview… I just try and be really transparent about the parts when I’m confused. Say if someone knows that my background is in science, I might say, “Pretend I don’t know anything about science – how would you explain it to me?” Or, sometimes I say, “How would you explain it to your friend in a bar or to your grandmother or to your kids?”

There’s different techniques you can use to just help someone – when they’re explaining something super complicated to you – to reframe it a little. And it’s not that the technical stuff drops out. I think that’s one of the beauties of Radiolab: We’ll embrace the really technical, sometimes in a silly way, but we don’t necessarily shy away from it.

When we start editing in ProTools, that is just a huge team effort of trying a draft. It might be I’m working on a certain part of the story, or we had different producers from the show help us on different parts of stories or entire stories. And so whatever producers working on it may work on a draft, where there’s some narration, there’s cuts of the tape, and then everybody listens to it and points out all the places they got confused or that felt really dense or if the rhythm doesn’t vary and it just all feels like too much.

We’re a very, very iterative team to Radiolab’s very iterative process. We just do tens upon tens of drafts of sections of stories, especially the science sections to just try and figure out how to make them as clear and fun, if they call for fun, as possible.

Even before an interview with a doctor or scientific expert, how do you prepare for those interviews?

Then I will usually do something almost freeform, like freewrite a bunch of questions I have before the interview. So I get these very kind of sloppy lists, that are long – so long. And then, I’ll think to myself, “OK, what’s the first question I want to ask? Where do I want to start?” And then sometimes I’ll think, “If we were going to get cut off 5 minutes in, because this happens more often than not, what do I have to get out of them?” Those types of things just help me prioritize.

Once I’m in [the interview] and we’re talking, you just kind of see where it goes too. You also try and allow space for tangents – it’s a big thing at Radiolab.

For the first episode, “The Primordial Journey,” how did you come up with the metaphors?

Some of them are like the Blade Runner one, where I was just like, this reminds me of the film Blade Runner, where they’re sitting out in the middle of the desert, and they’re in the garbage sack of the embryo waiting for the call … and it just felt really, really apt.

There’s a part of the metaphor that’s just like leaning into whatever fantastical image is in your brain.

Some of it is while I’m doing an interview with scientists. They’ll tell me something, and I’ll say, “Oh is that like…” and I’ll give a metaphor. And they might say, “No, it’s actually like…” this other metaphor. So part of figuring out the metaphors for me is engaging the scientists or whoever I’m interviewing to think about the metaphor with me … A lot of times they’ve been thinking about it way more than I have, so they often come up with the better metaphor. And also, playing around with ideas. You know, even though I use one (metaphor) in an interview, it doesn’t mean I can’t try ten more out while I’m building a story.

Why are metaphors so necessary for these types of stories?

The metaphor in journalism is such an interesting question because it can totally lead you astray. But if they’re right, they’re so helpful in painting both a technical and tonal picture for the audience of whatever information you’re trying to give to them. And it’s the same with print. If you have the right metaphor, metaphors carry both visual information, relatable information to someone’s life and emotional information.

It’s a way to reach people.

Yeah, it just reaches people where they’re at. You know, a lot of people haven’t seen neurons, right? And a lot of people haven’t seen the primordial cells on a primordial journey. How do I get the idea to you of what has been described to me or what the scientists are seeing, and relate to you so you in your home in like Illinois can see right in this moment with me and understand this as much as I want you to?

What was the big takeaway that you learned after producing this series?

My first thought is the power of teams and collaboration to make you better than you could ever be as an individual or how you can use a team in collaboration to just heighten how every individual is into like more awesomeness. Yeah, the team on this one was super important and really empowering and really made the series sound like it does.

What can people expect after listening to “Gonads”?

I hope just to think about things they thought they knew for sure, differently … My hope would be that “Gonads” is almost like a new pair of glasses, where you’re like, “Oh, that’s what that sign says.” It just offers you more clarity and a slightly different way of seeing the world, and then you can do with that what you will.

What is next for Radiolab in this transition phase with Covid-19?