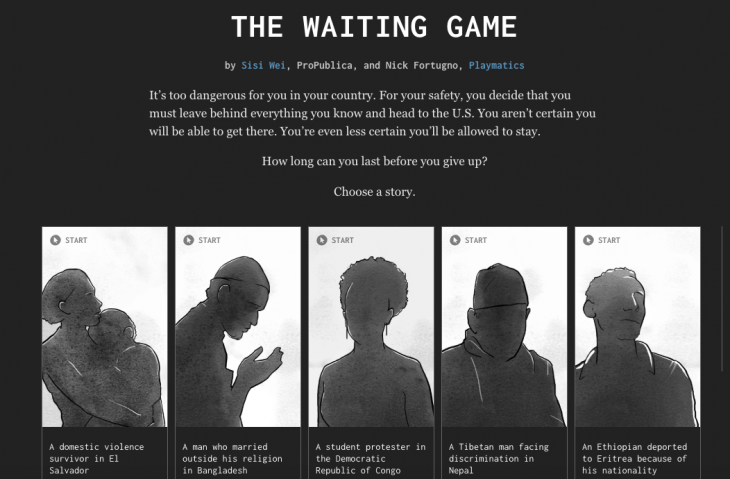 For decades, video games have been a major part of digital culture, helping players escape reality to live within virtual worlds. And it’s big business. Annually, the video game industry generates more than a hundred billion dollars. But no longer are video games built of fiction. Gradually, over the last few years, news organizations have begun experimenting with ways video games can be used to tell news stories. The concept breaks away from the traditional forms of text, video, audio and photos being used for storytelling purposes and helps the player, at least theoretically, feel more involved in the story they’re experiencing.

Recently, ProPublica, Playmatics and WNYC teamed up to create a video game that tells five different stories of people or families being granted asylum in the United States based on real case files. In “The Waiting Game,” players are taken through the day-to-day journeys of, say, a Tibetan man facing discrimination in Nepal or a survivor of domestic violence in El Salvador.

Storybench sat down with Sisi Wei of ProPublica to discuss the reporting process, the game’s creation and the code that went into the project, while also touching on the future that video games have in journalism.

Where did the idea for telling the stories of these immigrants seeking asylum originate?

The project itself started out as us trying to figure out the most effective way to inform and explain to the public – and anyone who doesn’t know what it actually means to be a refugee or an asylum seeker – what the process actually is for getting into the United States. So, the original idea was that there was a lot of misinformation around how the process was and how it worked and which way people were coming to the United States, so we wanted some way to systematically be able to show people what it was actually like.

What was the thought process behind telling these stories as a video game, rather than through traditional mediums?

Normally, all of the other mediums are what we would consider first, but news games in particular are something that I’ve been interested in for a while now and I’ve written about it for a while trying to figure out what journalism could do to really utilize what games bring to the table. We were searching around for a topic and what’s more appropriate as a game because people would get more out of it, as opposed to trying to make any particular topic a game. For example, some of our other investigations that we’ve done around this particular area are absolutely much better as a text story with photos or something like that and that’s the route we’ve gone. But, in this particular case, we were thinking ‘What if what we’re actually giving people is the experience or a simulated experience of needing to wait as long as people in the system actually need to wait?’”

How long did it take to report on all five stories to include so much detail?

I think last summer I spent a month or two reporting out a lot of information and then following up on that gradually. And then this year, probably spent a month to month and a half following up on any additional holes that I needed filled. So, a lot of that is re-confirming information we already had or getting details that you typically wouldn’t need to know. For example, to do the visual and sound editing and all that, one of the things that I did was I went to some hearings that you experience in the game just to see how is the particular court room at that location, what is normal for an experience here and recognizing things like, is the door to the hearing room open so that you can hear people in the hallway or is it closed? And that made a difference in how the audio sounded once you’re in the game and which scenario in court you are.

What determined where you would start each journey for each of the five stories you told?

The way that each journey works is that it starts with each person at the moment… they are going to start their journey to the United States. We don’t show you anything that happens before that except through flashbacks. The idea is, like in El Salvador, the back story is that the lady and her son had tried moving multiple times before and you get a sense of that if you experience the flashbacks. But, this is the time in which it works. She’s able to get away and she actually starts her journey coming to the United States. So, it basically starts all five storylines at the same point in their lives, relatively, like, “Maybe I’ve already tried to run before, maybe I haven’t, but this is the moment in which this time leads me to the United States in the end.”

Was there any thought to include the story of someone who didn’t receive asylum, rather than profiling five successful tales?

“We have been looking at immigration holistically as a topic.”

I have a story, at least one, in which I could’ve turned it into one of these side profiles, but the main problem is that with stories like that, I have as much information as I have and that’s it and it’s not possible for me to get more. So, one of the stories that didn’t make it, we had a lot of information initially, but there was no way for me to go back and ask follow-up questions and I couldn’t clarify additional information. So part of it made it not playable as a game because I couldn’t account for certain things and there was no way for me to go back to the source and have them explain to me, “What happened here?”

Are there any plans for potential follow-up investigations into other parts of the asylum process?

There’s been a lot of good work done already about regional differences in where you happen to be, what judge you happen to be in front of on how likely it is for anybody to be granted asylum. So, there are existing investigations from other news organizations on that particular aspect of it. Something that we are doing at ProPublica overall is that we have been looking at immigration holistically as a topic. So, not me personally, but we’ve been coming out with a series of things about people who get asylum here or who are immigrating here.

What specific code did you use to create the game and presentation?

Nothing special actually. The work that the team that I’m on normally does is in the realm of interactive graphics, news apps and visualization and this used exactly the same tools… so, HTML, CSS and Javascript. It’s sort of what you’re coding on to build websites and build interactive things online, so for this one, we didn’t have to do anything different from that.

What are the benefits of using a video game to tell a story as opposed to text, video or audio?

I think one of the most powerful moments in the game is what a person chooses to “give up.” That is a moment that we really planned on and planned for and designed around. What I mean by that is, I could’ve easily written you a very short piece that says, “We found five separate stories from five separate countries representing each type of criteria you can meet to seek asylum in the United States.” For the family from Bangladesh, it took over six years. For the woman and her child from El Salvador, it took two years and four months. I could write it like that and people can read and comprehend it like that. Intellectually, you understand what six years means and you understand what two years and four months means.

“We are forcing you to spend a little bit of time experiencing each day.”

But, what we were trying to do in this case is we are forcing you to spend a little bit of time experiencing each day. It makes a difference for me if you spend 15 seconds or two minutes on it. It’s more and more powerful the longer you spend on it. But, then the moment you decide that the small amount of time that you decided to put into this, you no longer have the patience for that and then you decide to “give up” is when you’re provided with a contrast of your own decision-making and then the amount of time these real people had to wait. And then you can compare yourself to how long other people wait. But the real comparison is to how long people who weren’t able to spend one second equals one day or three seconds equals one day had to sort of endure and you yourself create the comparison.

What is the future of video games being used for journalistic purposes?

Video games and journalism have had a history, but it hasn’t always been the most successful one because it’s been tried in the areas of breaking news and it’s hard to make something like this with such a fast turnaround. A couple of different places have tried it once or twice in a space like this, where it’s a longer investigation or a piece that can take longer to develop and I think there have been more successes over recent years than ever.

The main question is whether or not people at news organizations are interested in trying this out because, while it isn’t a new type of media, it is a type of media that in journalism isn’t typically used for storytelling purposes. But, the thing to always be careful of is most stories are not better done as a game, so to forcibly make them one, it actually worsens the story.