The coronavirus pandemic has impacted most industries, forcing professionals to adapt to new forms of remote work culture. Even journalists have had to adapt. This has reinforced the importance of digital platforms in journalism and how reliant people have become on social media as the primary means of communication.

While many media publications are still struggling to catch up with the ever-changing trends of digital media, independent journalist Bianca Graulau has been able to capitalize on social media for her reporting throughout the pandemic. At a time when media industry layoffs have been at an all-time high, Graulau took a leap of faith and quit her full-time reporting job at an established TV news station in 2020, and moved to Puerto Rico to pursue a career as an independent journalist.

Graulau, an alumna of Syracuse University’s S.I. Newhouse School Of Public Communications class of 2012, started as a broadcast reporter for local newsrooms like most early-career journalists. She has worked as an on-camera reporter for the likes of broadcast stations like Univision, ABC, Tegna and NBC. As a successful on-camera bilingual reporter, she gradually started noticing the decreasing viewership of broadcast news.

“It was 2016, and I was at a station in Sacramento, California, and I was already consuming most of my news content online. The only reason I turned on the TV to get my news was to see what the other stations were doing because I worked in news. But I recognized that if I didn’t work in news, it was really no reason for me to turn on the local news,” Graulau said.

Graulau started sharing clips from some of her broadcast package stories as short-form videos on social media platforms like Facebook, and she observed a pattern of increased viewership and audience engagement along with instant feedback on her stories. She wanted to experiment further with these social videos, but at the broadcast station she encountered some limitations. “I started noticing that stations, in general, were slow to catch up with this, how important it was to have a strong social media presence,” Graulau said.

After witnessing tangible results from the experimental videos, Graulau decided to take a break to explore reporting through social media for six months. She set out with a friend, reporting across the country, shooting and editing videos that were then posted online. Their experiment was a huge success, and the videos were getting millions of views. But unfortunately, there weren’t enough resources to monetize those views at the time.

After her six-month break, Graulau decided to go back to her full-time routine and took on two jobs to support herself financially. And in the meantime, she started researching platforms she could use and other avenues to monetize and finance her videos on social media.

She started posting her videos on Youtube and TikTok, both platforms that allow monetization of views and boast a massive audience base of diverse viewers. Graulau started gaining viewers and forming a community across these platforms.

She attributes her growing viewership numbers to her thoughtful production approach, which involves creating content that’s tailored to her audience and the platform, rather than making those aspects an afterthought. “I’m trying to figure out what resonates with that audience, what kinds of stories they want to see, how to build that relationship, that they’re going to keep coming back for my content,” she said.

With the pandemic taking over 2020 and remote work becoming the norm, Graulau decided to quit her full-time reporting job again and formally pursue her career as an independent journalist. This time she had more experience and a plan, she was better equipped financially and also moved to Puerto Rico to live with her parents to save on living expenses, which she could invest in her reporting.

Graulau has found massive success since her move to Puerto Rico in the summer of 2020. She has gained over 246,000 followers on TikTok and over 20,000 subscribers on Youtube. To stay financially stable, she also takes on freelance projects and has an account on Patreon (a subscription based platform that allows followers to financially contribute to their favorite creators). 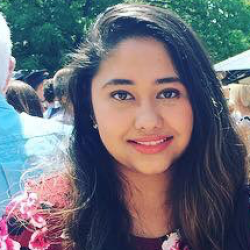 Pirzan Turel and Avantika Panda
Northeastern University Alumnus Pirzan Turel is a self-professed geek and aspiring multimedia journalist. When he's not figuring out mic placements or the best angle for a scene, he's busy catching up on all the video games he hasn't finished yet.
Avantika Panda is a Boston-based freelance journalist reporting on national and community stories.

Latest posts by Pirzan Turel and Avantika Panda (see all)