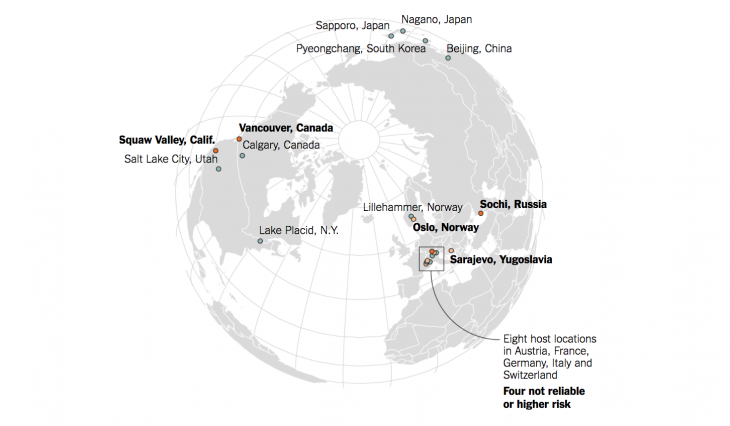 For most of February, around 3,000 athletes from 92 countries are competing in Pyeongchang, South Korea in the 2018 Winter Olympic Games. Over the course of the 17 days, there will be 102 medal events across 15 sports, making it the first Winter Olympics to host more than 100 medal events.

Medals will be handed out in more commonly-known winter sports – such as skiing, figure skating, ice hockey and luge – as well as less-familiar sports like curling, the biathlon and skeleton. Unlike in the Summer Olympics, most of the events that make up the Winter Olympics are fringe sports, not as well-known by the general population. In each of the 15 sports, the best of the best in the world at that particular sport – except men’s ice hockey, for one – will battle it out for the gold, silver and bronze. 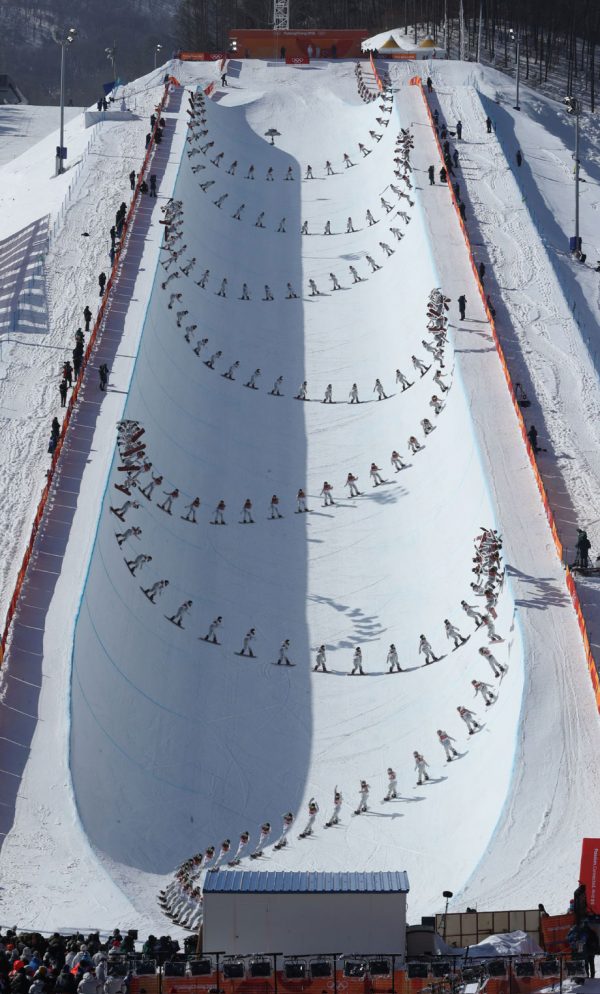 Storybench rounded up a selection of graphics that illustrate the brilliance of the athletes taking part in the XXIII Winter Olympic Games.

Chloe Kim is a star in the making, not just in America, but globally, for her skills on a snowboard and in a halfpipe. Her gold-medal-winning run scored her a 98.25 and included back-to-back 1080s, a feat never accomplished by a woman competitor. In total, her run consisted of six tricks and her score was more than eight points higher than the silver medalist, China’s Liu Jiayu. In order to complete the back-to-back 1080s and her other tricks, Kim routinely caught more air than her closest competitors, allowing her the time to pull off the tricks and locate her landings.

“How Sochi Looks Without Russia”

More than 40 Russian athletes were banned from the 2018 Games and the ones who are competing must do so as “Olympic Athletes from Russia” and will compete under the Olympic flag. This one was fascinating because, knowing what the sporting world knows now about systemic Russian doping, could you imagine the 2014 Olympics in Sochi, Russia without Russian participation? This data set takes that into account and it could’ve greatly altered how other nations perceived their performance in 2014. The 33 medals (13 gold, 11 silver and 9 bronze) that Russia won in 2014 would get pretty evenly dispersed among other nations, with silver medalists being bumped up to gold, bronze to silver and fourth-place finishers stepping onto the podium with bronze.

“Of 21 Winter Olympic Cities, Many May Soon Be Too Warm to Host the Games“

Sochi had to bank snow for months in order to ensure they had enough for the 2014 Winter Olympics. What other cities are being affected by climate change? That’s the question Kendra Pierre-Louis and Nadja Popovich answer in a piece from Jan. 11 that concludes, “by midcentury, nine former Winter Olympics sites may not be reliably cold enough for the Games.” 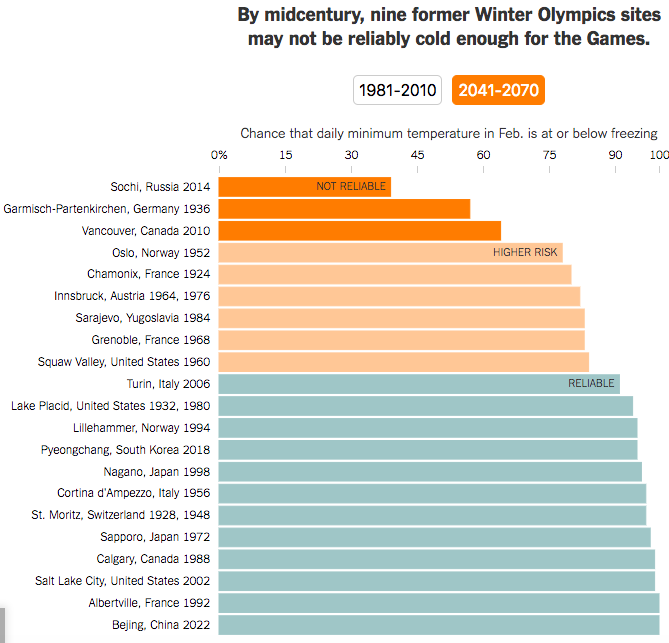 This article by Tiago Veloso covers a lot of different topics through visualization regarding the 2018 Winter Olympics. But, we’ll take a look at the graphic he created that shows which nations will be represented in PyeongChang, which includes six countries making their Winter Olympic debuts. It also includes other useful information about the size of this United States team, North Korea’s participation and the Russian athletes taking part. 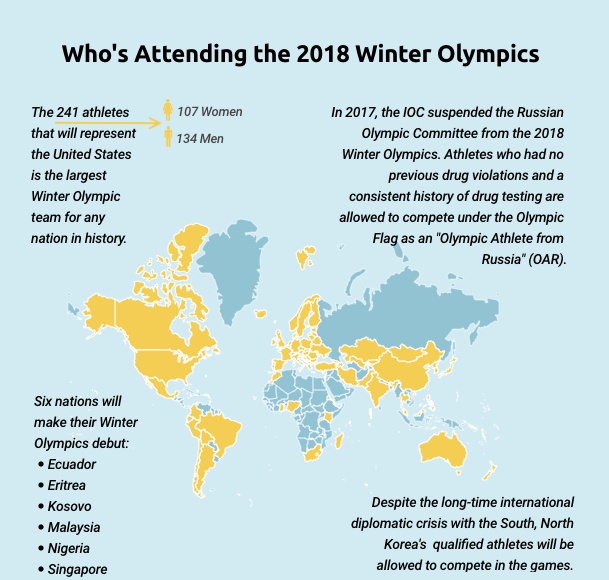 This data viz shows which countries are most dominant when it comes to winter sports. It breaks down each country’s success by Olympic Games, dating back to the first Winter Olympics in 1924. Then, within each Games, that country’s overall results are broken down by how many of each medal was won. It helps to show the progression of certain countries, like the United States and Canada, who have both been stronger since 2002, while also showing the sustained dominance of countries like Germany, Russia and Norway. 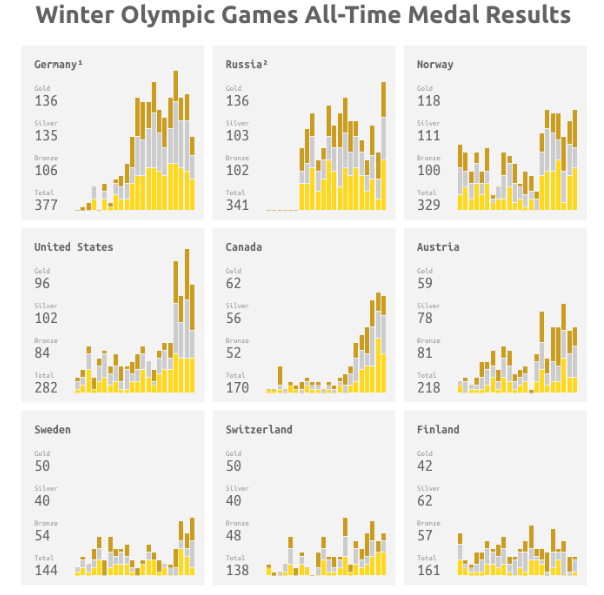 “Which Events Will Have The Most (And Fewest) Wipeouts”

You don’t root for wrecks in sports, but, when they occur, you can’t help but watch. With so many high-speed events making up the Winter Olympics, witnessing crashes is inevitable. So, which event will result in the most and fewest competitors completing the maximum number of runs? Well, the caveat is that just because an athlete didn’t complete the run, it doesn’t mean he or she crashed. There can be disqualifications mixed in, as well. But, if you like carnage, then skiing might be the sport for you to watch. And, if you like break-neck action, but few wrecks, then, perhaps surprisingly, skeleton, despite its name, could be up your alley. 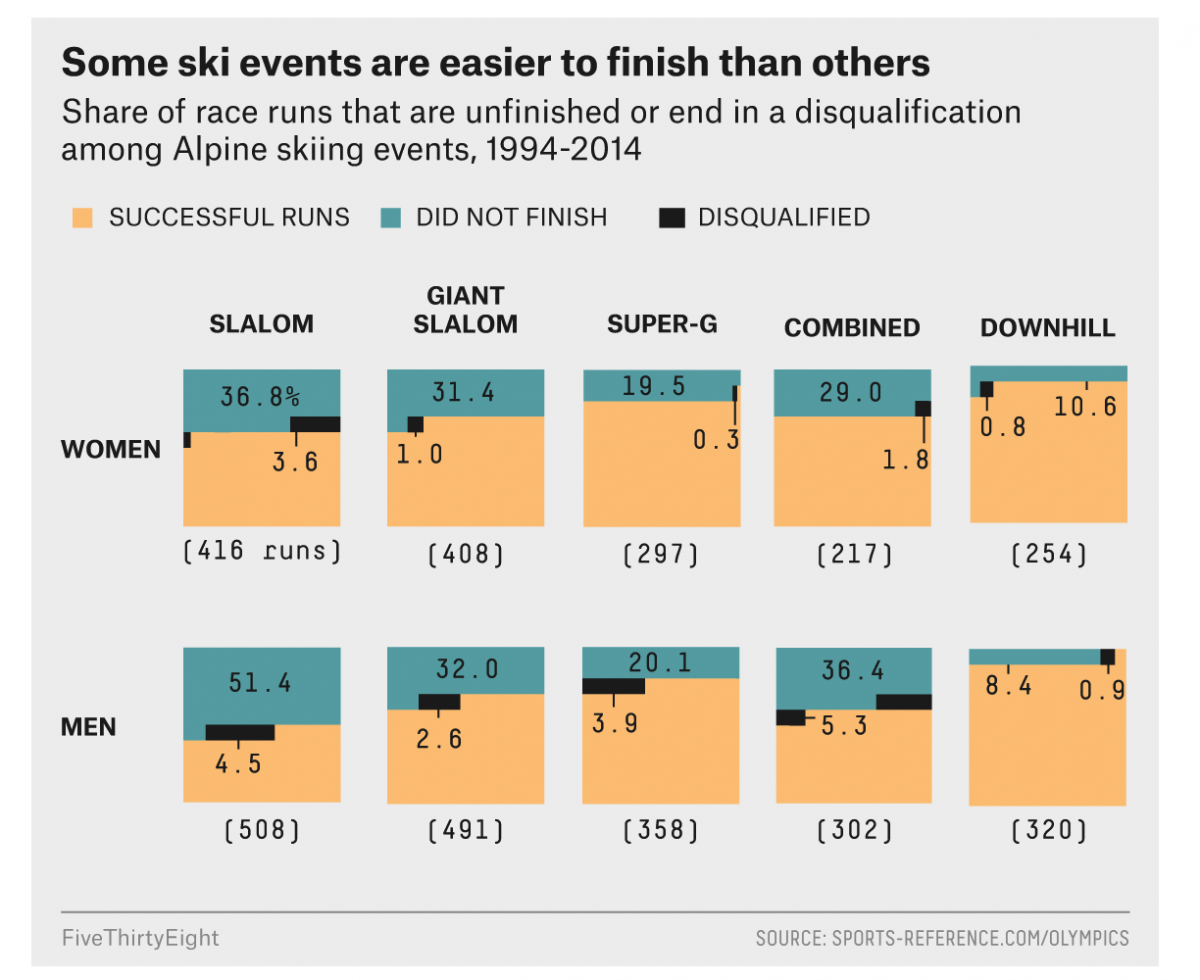 “Nathan Chen’s Mastery of The Quad”

At 18 years old, Nathan Chen is already a household name in the world of figure skating. A large reason for that is his willingness to attempt – and routinely land – a quad, a four-rotation leap in the air. In 2005, a rules change made the quad a critical jump for the top male figure skaters to perform. It’s use in top worldwide competitions has grown in the decade-plus since the rule was implemented, but no individual has landed it as frequently as Chen, who is single-handedly keeping pace with the rest of the field of competitors, according to this graph. 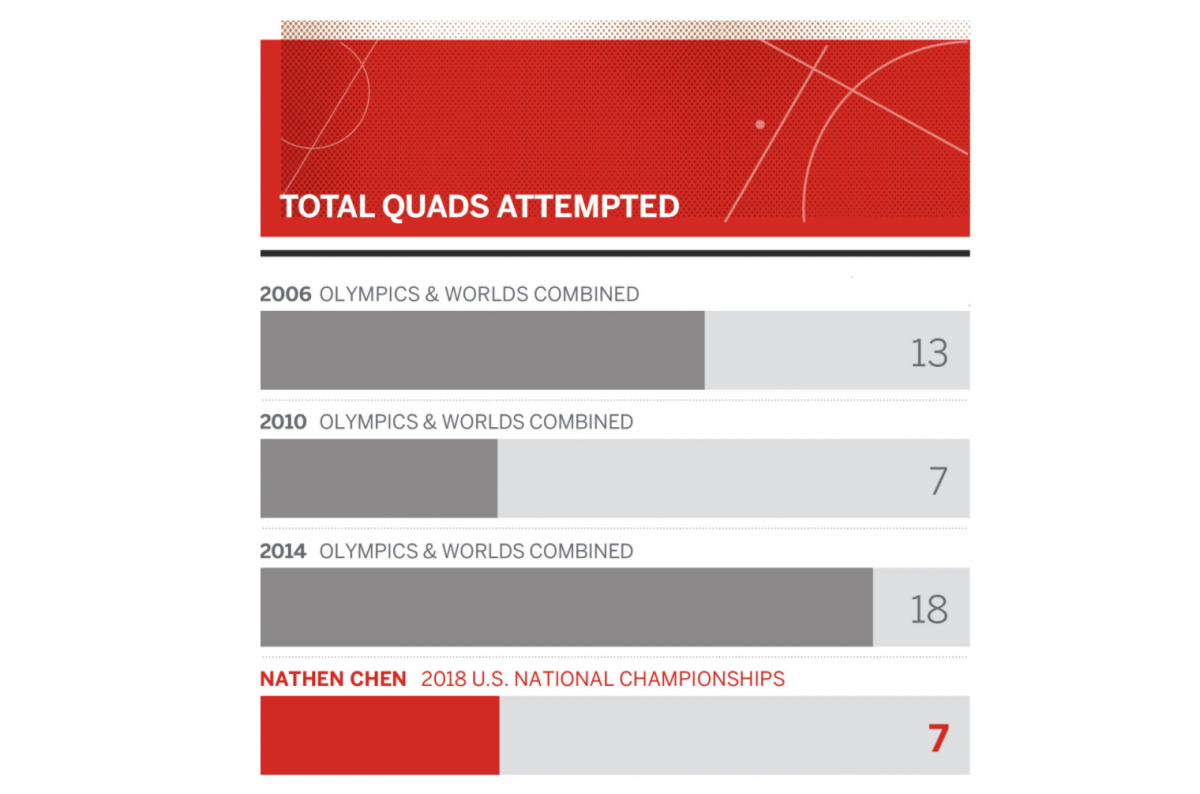 “If NHL Players Had Gone To The Olympics, Who Would Win Gold”

One of the biggest stories heading into these Winter Olympics was the lack of participation from the NHL. It’s the first Games since 1994 where the world’s best players will not be competing. That makes this sport the only one in these XXIII Winter Games where you can say that it isn’t truly the best against the best. But, that didn’t stop The Athletic from using advanced analytics and comprising each of the 12 competing nations with its best possible roster with NHL players to come up with the probability of each country earning a medal in 2018. Not surprisingly, host South Korea didn’t find the podium at all in any simulation, while the United States and Canada were the two overwhelming favorites to battle it out for gold, according to the data sets.

“Who Will Be Representing the U.S. Men’s Ice Hockey Team”

This is the last of the men’s ice hockey data visualizations. Without NHL players participating, the question leading up to the Olympics was, “Where will the players come from?” Prior to the 1998 Winter Olympics, the United States used amateurs in the Olympics and it had a very young team. Getting players from the college and junior ranks again seemed like the way to go, but this time, USA Hockey went with a mixed bunch, a combination of college-aged players and veterans. So, surprisingly, the age of this United States ice hockey team is actually older than if it was made up of NHL players because a large percentage of the roster is made up of former NHL veterans who have either since retired or play in another professional league that isn’t the NHL. But, don’t let the lack of NHL players deter you from watching. There will be at least six competing teams that will have a roster consisting of players who have combined to play more than 1,000 games in the NHL in their careers. 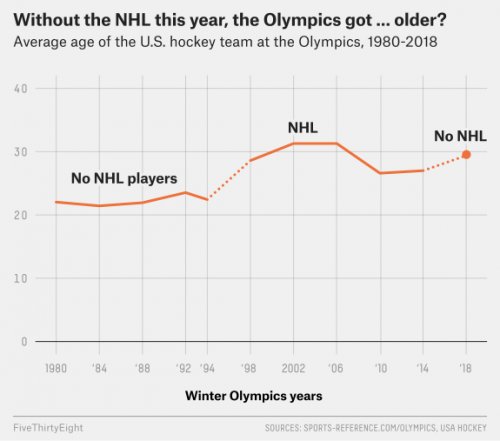 “Mikaela Shiffrin’s Quest To Be The Best”

This interactive piece details how U.S. Olympic skier Mikaela Shiffrin approaches becoming the best skier in the world across all skiing disciplines. Shiffrin is known for the slalom, an event that requires the quickest pivots between gates, but is the slowest of the four main events – slalom, giant slalom, super giant slalom and downhill. Shiffrin is chasing fellow American Lindsey Vonn for most event victories, however, what this graphic shows is that, if you excel in either slalom or giant slalom – slower events – you likely don’t excel in super giant slalom or downhill, which require more speed. Shiffrin and Vonn are on opposite ends of the spectrum in their areas of expertise. 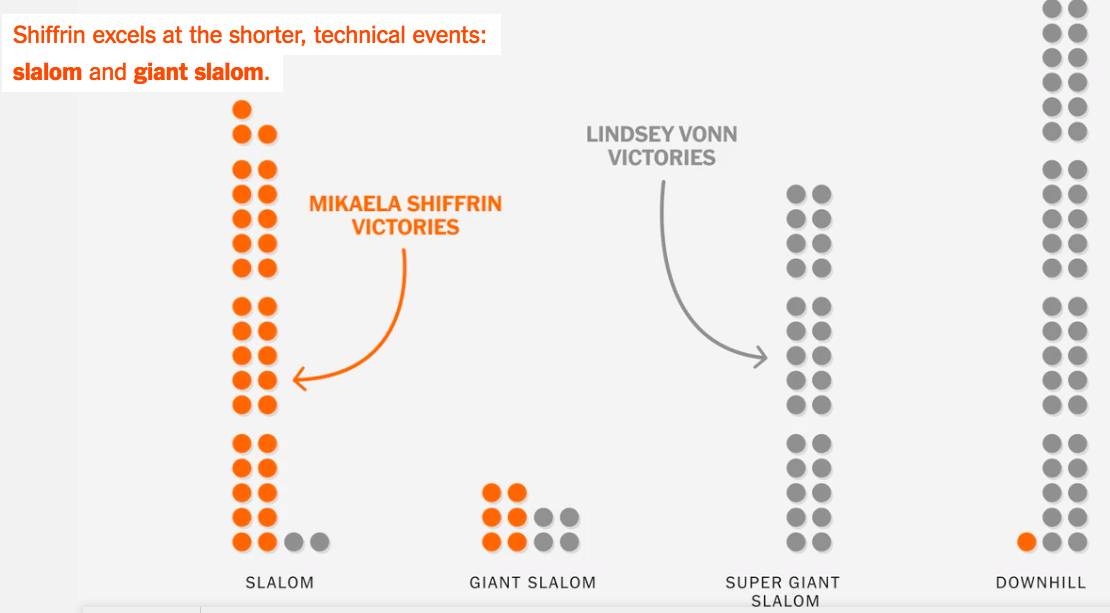 Patrick Strohecker
Patrick is a graduate student at Northeastern’s School of Journalism.