How does the media usually cover politics? Is it all based on opinion polls or anecdotes or is there a way to simply show the data?

For the 2022 midterms, USA TODAY launched a series called Red Words, Blue Words which provides a data-driven look at the campaign trail, based on social media posts from more than 1,500 candidates running for House and Senate.

Aleszu Bajak, a senior data reporter at USA TODAY and a former instructor at Northeastern University’s School of Journalism who founded Storybench.org, discussed his recent article FBI at Mar-a-Lago, Inflation Reduction Act are hot topics for congressional campaigns. Bajak, who enlisted the help of Boston University journalism student Melissa Ellin for the piece, talks about the data that feeds the Red Words, Blue Words series and how he analyzed it.

How did you come up with the idea for this particular story?

I have a dataset with the Facebook and Twitter posts from more than 1,500 candidates running for Congress in 2022. So I don’t really choose the story. Rather, the candidates drive the stories based on what they’re saying, in aggregate, on social media. For this article, there were two trending stories that drove it: the FBI search of Mar-a-Lago and the Inflation Reduction Act. The tools for the analysis were pretty basic; I was simply gathering the data from Twitter and Crowdtangle over time and using text analysis tools. Shoutout to the tidytext package in R.

What came first? The data or the idea? In other words, did you happen to fall upon the data and use that to form the story or did you seek out the data to create visuals for the idea?

I’ve been working on how to quickly pull what Congress is saying from social media and press releases. (Here’s a good dataset with congressional Twitter accounts and here’s a package, rtweet, that will help you pull those down in bulk.) When I was introduced to this data vendor, KnowWho, which collects data on candidates across the country, I just put those two things together and pitched a series for the midterms.

What findings from the analysis did you think were the most interesting?

One thing that was interesting was how abortion mentions spiked in social media posts from both parties in relation to the Alito draft leak and the Dobbs decision. But just as interesting was how quickly those spikes dropped off. One might have assumed that Democrats would have continued to message consistently about abortion since then but they’ve moved on to other issues, according to the data. What Red Words, Blue Words does is gather data and surfaces what’s trending, what’s interesting and what’s changing.

From its conception to viewing it in its final form, which part of writing the article did you find the most enjoyable?

I don’t know if covering politics is enjoyable, but it was very interesting to see how quickly and how concerted the mentions around the Inflation Reduction Act were. We heard a chorus from many GOP candidates about wanting more border patrol agents instead of 80,000 new IRS agents. I was seeing, almost verbatim, the same talking point over and over again.

How well was it received by those who read it?

USA TODAY doesn’t have comments on the website but we do monitor reactions on Twitter and Facebook. Generally the reaction has been fine; with each installment there are always a few people who say ‘this is obvious!’ But there’s also folks urging me to look into specific races or issues or candidates and those kinds of leads can be very helpful. 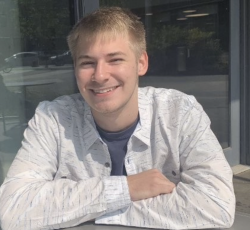