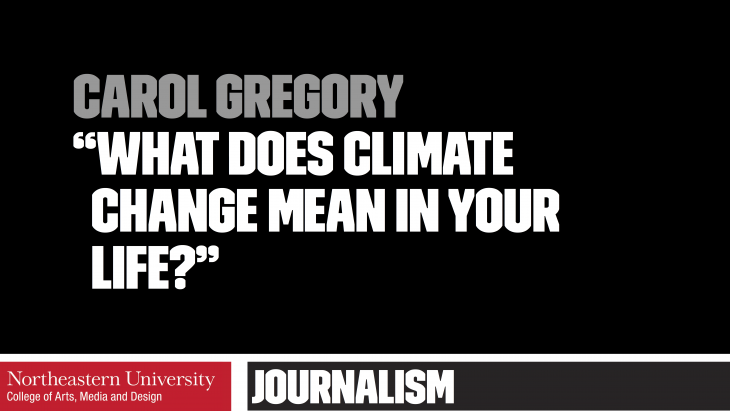 Carol Gregory, the vice president of communications and marketing for the Conservation Law Foundation, a Boston nonprofit focused on the environment, said her job is to sell visions and ideas to people who care about environmental issues.

The message that her organization delivers has to be easily understandable because we are so bombarded with information on social media, she said.

“All of the [messages] come to us so quickly, you have to be able to have an accessible message that people can understand,” said Gregory, whose organization covers New England. Gregory spoke about how to develop an effective communication strategy for a nonprofit at Pizza, Press & Politics, an informal speaker event at Northeastern University’s School of Journalism, on Nov. 11.

Gregory said when she talks about environmental issues to people, she describes “climate change” as “environment destruct.” Because for people who are not working in this field, “climate change” is a phrase that is too general to relate to, she said.

Environmentalists need to learn to speak about the values that people are concerned about, Gregory added.

Gregory described communication as a type of marketing. But rather than selling a product, CLF is selling visions and ideas. In order to reach target audiences, it has to effectively promote their ideas to people who really care about these issues, she said.

Gregory thinks good communication means explaining the most important issues in ways people can understand. She gave some advice to student journalists:

1. Simplify the message you are trying to communicate. Not all readers will understand the terminologies you are using.

2. Do as many as internships as you can, because that’s the best opportunity to see how other people work and talk.

3. Be open minded to what you want to do in the future.

4. Network with people in the business.