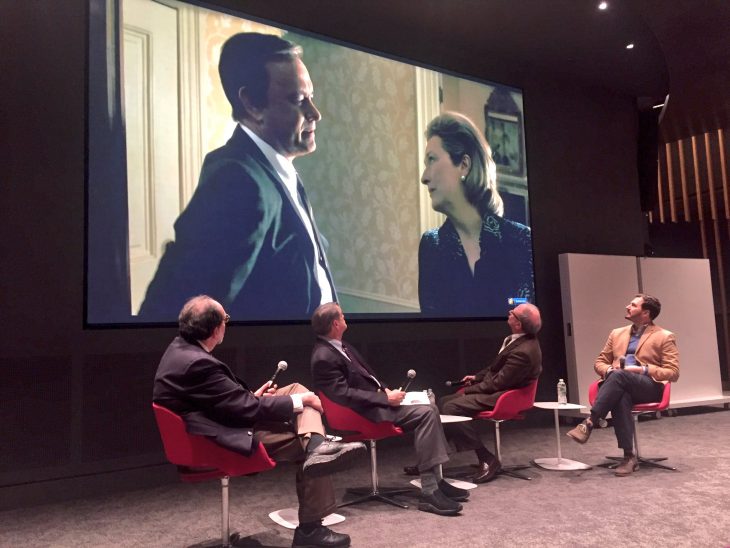 Anyone with a knowledge of First Amendment legal history might look at “The Post” and ask why a movie about the Pentagon Papers focuses on The Washington Post when the controversy began with and was named for The New York Times. At a recent Northeastern University panel discussion, former Post and Boston Globe editors spoke to this and dove into the historical and monumental newspaper victory.

The panel, consisting of former Post executive editor Leonard Downie Jr., former Boston Globe editor Matt Storin and Northeastern law professor Woody Hartzog and facilitated by Northeastern School of Journalism director Jonathan Kaufman, discussed the making of the movie, the publications’ roles in the original coverage of the 1971 scandal and how a similar situation might play out in today’s media landscape.

The making of the movie

Downie, who was hired to be a technical consultant for the Stephen Spielberg movie, said “The Post” is more about the relationship between Post publisher Katharine Graham, played by Meryl Streep, and editor Ben Bradlee, played by Tom Hanks, as they decide what to do with the papers.

The movie is based on a screenplay that young screenwriter and playwright Liz Hannah wrote after reading Graham’s autobiography, which she reworked alongside “Spotlight” screenwriter Josh Singer to ensure it would make the best story and that Graham’s family would approve of it.

“[Hannah] was so taken by the arc of [Graham’s] life where she inherited a newspaper that she was not expected to run, started running that newspaper and then had to make this tremendous decision about the Pentagon Papers, and then in the case of Watergate, and continued to create a great newspaper,” Downie said. “And she was so taken by that she decided to seize on the Pentagon Papers decision and to write a screenplay about it.”

Downie, whose job it was to spot anything inauthentic, said the movie sets were impressive. The set of the newsroom, based in an old AT&T building in New York, had desks that looked identical to those in the old Post newsroom and was filled with phone directories and newspapers from the exact time period. “I don’t know where they get these things,” Downie laughed.

Northeastern’s Jonathan Kaufman said the movie’s strong female lead will be powerful, especially now, when the role of women in power and how women are treated has become such a prevalent issue in the news cycle.

“I think that’s why they chose this, because they said it wouldn’t have been as dramatic to have one white guy versus another white guy; that it is Katharine Graham’s story,” he said. “Here’s a powerful woman making important decisions and really standing for the best the country could hope for.”

Downie, who was the assistant city editor at the time the Pentagon Papers story broke, did not play a huge role in The Post’s coverage of the papers. But as a journalist in a small newsroom, he knew something big was happening.

“Eventually most of the drama was taking place in Ben Bradlee’s house because he didn’t want the entire newsroom to know what was going on,” Downie said. “He was very concerned about the fact that The New York Times had this big story and The Post didn’t. He knew something was going on even before The Times started printing, tried to figure out what it was, couldn’t, and then suddenly The Times starts publishing these stories.”

Matt Storin of The Boston Globe, meanwhile, was involved in reporting the controversy, despite the fact he had only been city editor for a week when the story fell into their laps. Having previously covered Vietnam as a foreign correspondent, he had more experience than most of the staff in foreign affairs.

[perfectpullquote align=”right” cite=”” link=”” color=”” class=”” size=””]“I said, ‘I know something you don’t know.’ One of my great moments in journalism.”[/perfectpullquote]

Storin vividly recalled the details of Globe wire editor Tom Ryan walking into the lower mezzanine newsroom with a red plaid suitcase filled with a 1,700-page subset of the Pentagon Papers. He described the lull after the reporting team sent the piece in for pre-editing prints that night. As he sat alone at the Globe’s top-floor, 24-hour cafeteria eating beef stew after midnight, the news radio began.

“This voice says, ‘Publication of the Pentagon Papers was curtailed today when The Washington Post was enjoined from publishing,’ and I just sat there and I said, ‘I know something you don’t know.’ One of my great moments in journalism.”

He showed the crowd a photo of the subpoena issued to Globe reporters after the piece was published. “It’s been framed on my wall for 30 years,” he said. “It’s not every day you have the United States of America versus you.”

The Supreme Court court case resulting from publication of the Pentagon Papers, New York Times Co. v. The United States, resulted in a victory for all media outlets because justices ruled that stopping The Times and The Post was unconstitutional, re-enforcing a presumption against this kind of prior restraint.

“Would the method of dissemination of the documents be different? Probably,” Hartzog said. We’ve got secure drops, we’ve got lots of different sophisticated ways in which to deliver information. But would the publication of it change? I mean it might, but if  it did it would have significantly less importance in my mind.” Furthermore, Hartzog said, courts, at least for the time being, will likely continue to favor news outlets in cases of prior restraint.

“With this court there have been some relatively favorable First Amendment cases coming out of this Supreme Court,” he said, “so I would imagine that you would see something similar at this point given the markup.” Where there’s uncertainty, he said, is whether that will be the case with future justices. As a vocal anti-press president, Donald Trump would likely appoint judges and justices who look to limit the First Amendment.

The panelists also voiced concerns over the fact that if a publication broke a story like the Pentagon Papers today, would anyone believe it.

“The thing that has been keeping me up at night a lot lately is the idea that the press could publish it and they could have verifiable facts and no one would believe it,” Hartzog said. “And that’s what really concerns me the most about how this might be different.”

Kaufman agreed. “It showed the importance of a credible press, that maybe the press has this obligation to be transparent and to be believable,” he said, “because if you have to choose between the government and the press, not just judges will make that decision but readers will, too.”