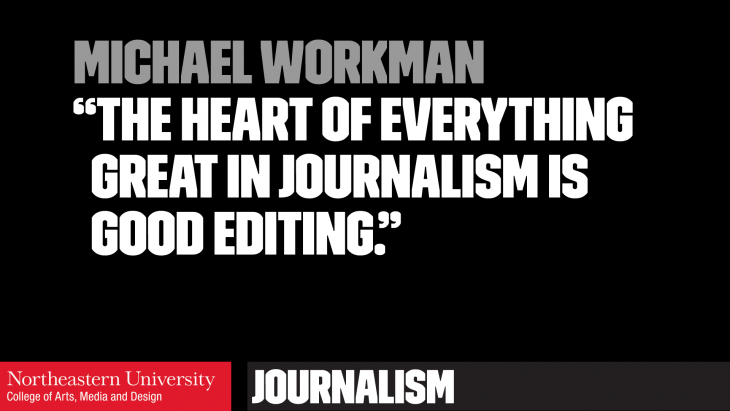 Michael Workman, a former senior interactive designer at the Boston Globe, urged an audience of student journalists and designers to try new things beyond writing and editing and to challenge themselves to a master new techniques and to aim for a higher standard of work. Workman spoke last week at Pizza, Press & Politics, a speaker series hosted by Northeastern University’s School of Journalism.

Workman, now the design director for Northeastern’s Experience magazine, talked about his work as a news designer. The most important thing a news designer can do is present the news to the readers in the most effective way possible, Workman said.

Workman, who was also interviewed before his talk, said when he started his journalism career, he did not have a design background. Instead, he concentrated on newspaper editing, writing and design for print.

But while working at the Baltimore Sun, he became intrigued by online design. His boss let him try new things.

“It’s a combination of a good boss and organizations that give you an opportunity,” said Workman, who learned design techniques by himself and kept exploring new facets of design. The differences between web and print design are enormous, Workman said. The biggest difference is that print news is very specific about design — the designer knows exactly how it will look.

But web news design is just the opposite — there are so many different devices. Design must work on all the different browsers, creating a difficult technical challenge.

Personally, Workman likes web design more than print design. As the capabilities and platforms change, there are many new exciting ways to tell stories. In the future, storytelling will be much richer, he said.

He said it’s important not to be overwhelmed by new innovations. “Always keep your eyes open, and know what’s happening out there,” he said. Workman told students:

Not everyone can learn everything, so find people to learn from, Workman said. People need to understand the technologies, but that doesn’t mean people have to master them. But without knowing the possibilities, journalists will never be able to use the tools to tell their stories, he said.