Hello again from Northeastern University’s Reinventing Local TV News Project. We’re entering an exciting phase as we begin experimenting with new methods for video news storytelling and searching for better ways to engage the viewing audience both on-air and online. If you’re new to our project, you can catch up here.

Our premise is simple. Local television news is important. Despite a shrinking and splintering audience, local TV is still how most Americans get their news. It reaches the masses — providing a real opportunity to inform citizens.

This blog has been quiet for a few months, but behind-the-scenes our team of researchers — made up of some of our brightest School of Journalism graduate students — has been busy watching and analyzing hours of television newscasts and online video news, looking for signs of innovation.

“We’re partnering with a handful of television stations across the country.”

Our initial findings show most stations are sticking to a traditional storytelling format. Crime stories continue to dominate. Despite an investment by some television stations in investigative and special project units, true investigative and enterprise reporting is often lacking.

Let’s be clear: we aren’t suggesting that local television newsrooms start showing documentaries at 6 p.m. or that 60-second Snapchat-style productions should replace the local news team. But we do see opportunities for more creative packaging both on-air and online.

So here’s where things get experimental.

We’re partnering with a handful of television stations across the country. Over the coming months we will take some of their best stories and “remix” them—re-producing those stories using experimental techniques. Sometimes we will remove the reporter from the story altogether. In other cases, we will alter the format by using a variety of tools including data visualizations and animation.

We will then test both versions of the stories — traditional vs. experimental — in their respective markets and see if we can discover new ways for telling stories that attract and inform a larger audience. 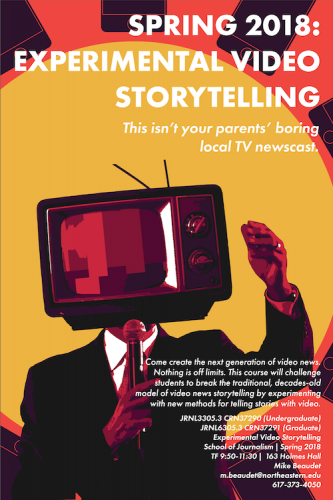 We appreciate our partners who are making this project possible: The TV stations participating in the research, the audience engagement firm SmithGeiger, and an impressive industry advisory group. Our work is being supported by the Stanton Foundation. Dr. Frank Stanton was the president of CBS and pioneered audience research.

Out of this project grew an Experimental Video Storytelling class at Northeastern filled with many of our most gifted students. They’re focused on breaking the traditional TV storytelling mold and their input will be invaluable as we work to re-package local television news stories in the coming months. Our class motto is also their challenge: This isn’t your parents’ boring local TV newscast.

What do college students think about local TV news?

If you’ve got 5 minutes, listen to what these twenty-somethings think about the state of local television news. After all, they are the audience of tomorrow the industry needs to survive and thrive.

We asked them three simple questions: What works? What doesn’t? What’s needed?

Their answers are honest, thoughtful, and something every television newsroom should contemplate.

Here’s to 2018! And better video storytelling for local television.

Latest posts by Mike Beaudet and John Wihbey (see all)