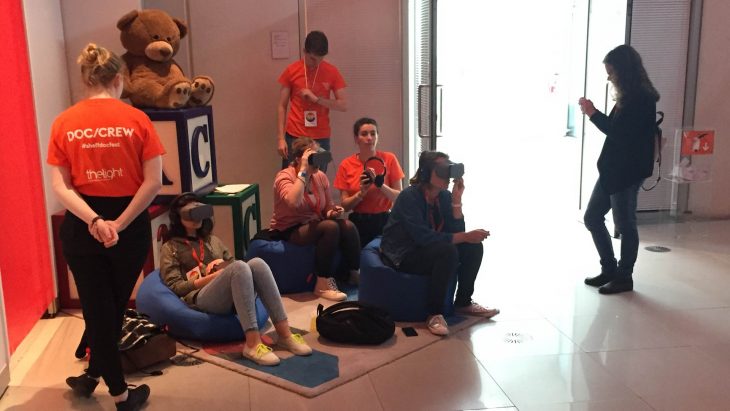 A growing number of non-fiction works are being produced at the intersection of documentary storytelling and journalism. The Sheffield Doc/Fest has become one of the best events to experience these new works. The festival was founded in 1994 and takes place in June each year in Sheffield, England, a vibrant city with steel industry roots two hours from London by train. Doc/Fest has become the premiere documentary festival in the U.K. and ranks high among international documentary festivals. This year I had the opportunity to attend and two projects in the Alternative Realities Exhibition stood out in terms of expanding the conception of documentary storytelling in a journalistic context.

A hidden narrative of a workplace romance

Wikileaks: A Love Story (Anna Ridler, 2016) is an interactive augmented reality (AR) installation that draws on over 10,000 pages of Wikileaks documents to expose the hidden narrative of a workplace romance. Using an iPad, you are invited to scan neatly organized piles of documents on a long table representing the political shenanigans that we assume are being revealed by the database. As you scan the documents data from real emails that Ridler discovered are superimposed on the image of the documents on the table. From this you learn about the romance beginning with the couple in love and ending with the relationship falling apart. I found the physical act of walking along the table created an embodied experience that was far more engaging than simply visiting a web site.

Ridler’s work points out that in addition to the documents of “political, diplomatic, or ethical significance” that Wikileaks was designed to collect from anonymous sources—with the goal of balancing the citizen’s right to know against powerful institutions and potential corruption—it is also plagued with a significant amount of bycatch including personal and private information. Ridler chose to redact the names of the actual participants in the romance she discovered, presenting us with a savvy critique of the failure of Wikileaks to address the problem of curation and the conflict between the public interest and the right to privacy.

I found myself reflecting on questions of privacy in the context of radical transparency as I walked away from the exhibit. AR works like this point at the opportunity for documentarians and journalists to extend their work beyond the ubiquitous black mirror we constantly stare at and relocate our gaze back out into the physical world, if only for a moment, and in this case, to provide access to something hidden in cyberspace.

The world from a infant’s point of view

First Impressions (The Guardian, 2017) uses cutting-edge research in neural development and color vision in infants to provide viewers with an immersive experience of world from a infant’s point of view during the first six months of life. The setting for this five-minute VR micro-documentary experience included bean bag chairs and large, colorful blocks to set the context as assistants helped you put on the viewer and headphones.

At first you can only see blurry objects in a monochrome field as a narrator explains what’s happening in terms of neural development. Slowly color enters your visual field, at first reds and greens, and eventually blues and yellows. The sharpness of the objects around you increases gradually as you look around the environment of your bedroom. You see and hear the coming and goings of your parents, another child, and the family dog as the narrator explains how crucial social interaction is during this phase of neural development.

First Impressions was created by the Guardian’s in-house VR team including Nicole Jackson and Francesca Panetta and is part of a series of editorially independent VR films that The Guardian is launching on Daydream, Google’s new platform for high quality, mobile VR.

This work is a particularly good example of using a VR headset to deliver an experience that is uniquely well-suited for VR. I walked away with a visceral understanding of phenomena that up until now I had only been able to read about. Many of the VR projects I’ve experienced leave me thinking, “just being there is not the next best thing to being there,” for me, the work needs to add something that goes beyond immersion in a audiovisual field and First Impressions accomplished this. The language of AR and VR storytelling is evolving, over the past two years we’ve started to see the equivalents to cinematic works like A Trip to the Moon (Georges Méliès, 1902) after several years of seeing works more akin to the actuality films of Auguste and Louis Lumière which first screened in 1895. In other words, we’re in the early days of a rapidly evolving medium.

Last year, the VR work that stood out for me at Doc/Fest was Notes on Blindness – Into Darkness (ARTE, 2016), based on the audio diaries of John Hull, a writer who gradually lost his sight and documented his experience using an audio cassette recorder. The work was originally produced for Samsung Gear VR using Unity by creative directors Arnaud Colinart and Amaury LaBurth as a companion to the documentary film Notes on Blindness (Peter Middleton and James Spinney, 2016), however, it uses a completely different visual language than the film.

The work immerses you in articulations of sounds visualized as outlines fading in and out of your visual field as Hull narrates his experience, enabling you to feel what the loss of sight might be like as sounds take on a new role in revealing the texture and topography of your environment. Notes on Blindness – Into Darkness was the first VR experience that felt to me like an eloquent use of the emerging audiovisual grammar of VR. First Impressions follows pretty well in those footsteps. We’re moving beyond the seductive enchantment of technical wizardry and into the world of immersive storytelling.

Photos: David Tames. This post was originally published at Kino-eye.com. 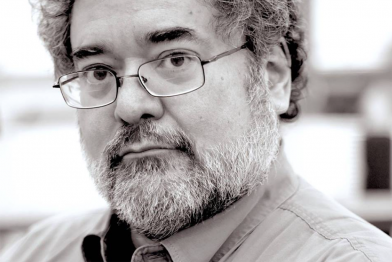 David Tames
David Tamés is a documentary media maker working in both linear and interactive forms. He is an assistant teaching professor at Northeastern University.