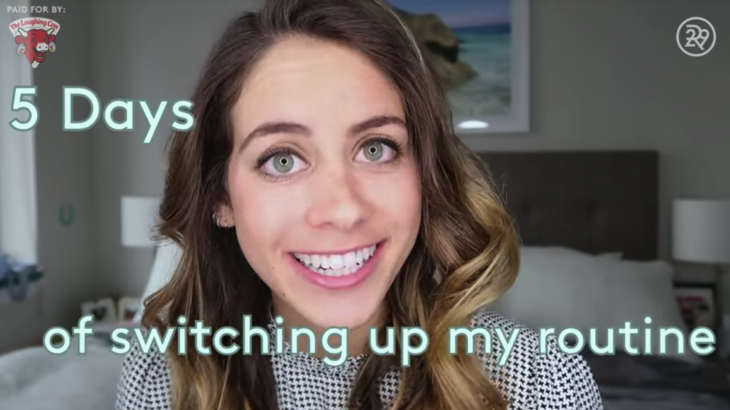 Lucie Fink is a video producer and lifestyle host at Refinery29, a site that self-describes as a “modern woman’s destination for how to live a stylish, well-rounded life.”

How did you get the idea for “Try Living With Lucie?”

The concept of doing a video series where I tried five-day challenges is something that has been on my mind since I was in college. When I interviewed with Refinery29, I had a whole booklet of different video formats that I thought were repeatable, and that I could essentially plug in any sort of topic and continue to create content. ‘Try Living With Lucie’ was one of the ideas on that list, and this five-day challenge format was the one they suggested I run with immediately. Honestly, it could have been any of the other series that I pitched to them that became just as popular as ‘Try Living with Lucie.’

I like to tell people I don’t really think it was a genius idea, you know, a girl doing five-day challenges. I don’t think there was necessarily a need in the market for a series like that. I just gave the audience a consistently programmed video series and everyone then became attached to it.

How do you choose the topics for each episode?

Every episode is really different. The way it typically starts is we come up with a topic – we generally take these ideas from audience suggestions. But, every so often, there’s a video topic that I really want to do, something that has been interesting me or something my friends and I have been discussing, but most of the time we pull the ideas directly from the audience comments. Once we have the idea, I do an initial research page where I sort of pull together all of the basic principles like statistics, fun facts and key people in the space that I might want to interview. Then I go about planning what I want the five days to look like.

How do you choose how to plan and structure each episode?

I was a creative writing major at Johns Hopkins and I have been storytelling in multiple ways pretty much throughout my entire life. ‘Try Living With Lucie’ is, at the end of the day, a story. I’m telling the audience the story of how I tried this challenge. In some ways it is produced like a TV show, because you need to have a beginning, middle and end to keep people interested. Even though I am doing the challenges and really living them out truthfully, I also need to make sure that there are elements of excitement, and that it has a start and a finish. I create the five-day flow which usually kind of flows intentionally from one activity to the next. So, if I try something on Monday I made sure Tuesday is a little bit different in some way, and that naturally flows into Wednesday and basically once I have the full five-day breakdown, that’s when I start going about the pre-production aspect.

What does production typically involve?

I start making calls, contacting places that I want to shoot at and connecting with experts that I might want to interview. It depends on what the topic is, but sometimes I have to actually live out the challenge myself and actually partake in the five-day challenge before I film it. Sometimes I really want to know how I feel before I go about filming it. So sometimes the filming is staged and recreated after we’ve already done it without cameras. But other times there’s a challenge that I can’t really do twice. For instance, we just recently shot at a Japanese green tea ceremony and that wasn’t something that we had enough budget for me to do alone once without the camera and then do again with the camera, so we really only shot that once and I did it live for the camera. So every episode is different. But for the most part I really try to live out the challenge for us to know exactly how I’m gonna feel, before we bring the cameras and then shoot it.

What do you want your audience to get out of “Try Living With Lucie?

I love this question so much because, honestly, my answer to this has changed over time. In the beginning I was just creating this content because I thought it was my dream job to run around New York City and try new things. In a few years of working for Refinery29, I had already tried more things than I had done in my whole life before that. I really started out doing it for myself, but quickly it transitioned to, ‘Wow, I’m doing what I’m doing every day because it’s inspiring other people to shake up their lives in some way.’

I get a lot of private messages and emails from people telling me that something I did in a video inspired them to get out of their comfort zones and try something new, or how my mindset has shaped theirs and it’s changed their lives. Maybe they went through a really bad breakup, or they had some sort of traumatic incident in their life, and the ‘Try Living with Lucie’ mindset helped them get out of that really difficult time by encouraging them to get out and try something new and take care of themselves. That’s really the most meaningful type of message that I receive and that’s really why I’ve continued doing what I’m doing. That’s really what I want my audience to get out of it – the sense of inspiration and empowerment, and I just want people to smile when they’re watching and to feel like they have all the tools they need to live their most powerful and successful lives.

What advice do you have for people wanting to succeed in the field of lifestyle-centered content?

I wouldn’t encourage people to sit around and wait until they come up with a genius idea. I don’t think it’s about having a groundbreaking idea. I honestly, truthfully don’t believe that there are many new ideas in today’s world. You know, everything’s been done in terms of content. The space is so saturated. There’s a lot of content out there. So, my advice wouldn’t be to come up with a genius idea. I mean, if you have a genius idea, by all means run with it! But more so, my advice would be whatever your idea is, even if it’s not fully fleshed out, even if it’s not the best idea in the world, just get started. Put those ideas into action. If you sit on an idea for too long, nothing’s going to happen from it. Instead, I would encourage you to take that idea and be the first person to do something about it. You know, create something that speaks to you, that’s really your way of expressing your feelings and sharing your vision with the world.

I just really always encourage people to start and get started and to be consistent about the work that they’re creating. Because that’s really the biggest thing I think that has contributed to my growth – consistency. So, I’ve worked at Refinery29 for three years now and, without fail, we’ve posted a video on YouTube every single Friday. And that consistency I believe is really what grew the audience so quickly and made them so dedicated because they were being given this content that they didn’t previously have, and then they got attached to it. For the most part, YouTubers start and then they can’t keep it up so they stop. I think like 90-something percent of YouTube channels only have a few videos on them and then they’ve stopped. But really the small, small percentage of successful YouTubers and content creators are those people who didn’t stop. Even when they realized that maybe they were making content and nobody was watching yet, or they were creating content that just their best friends or their parents were watching. Eventually it evolved into building an audience, but they never gave up. Those are the people who really succeed in the content creation lifestyle space.