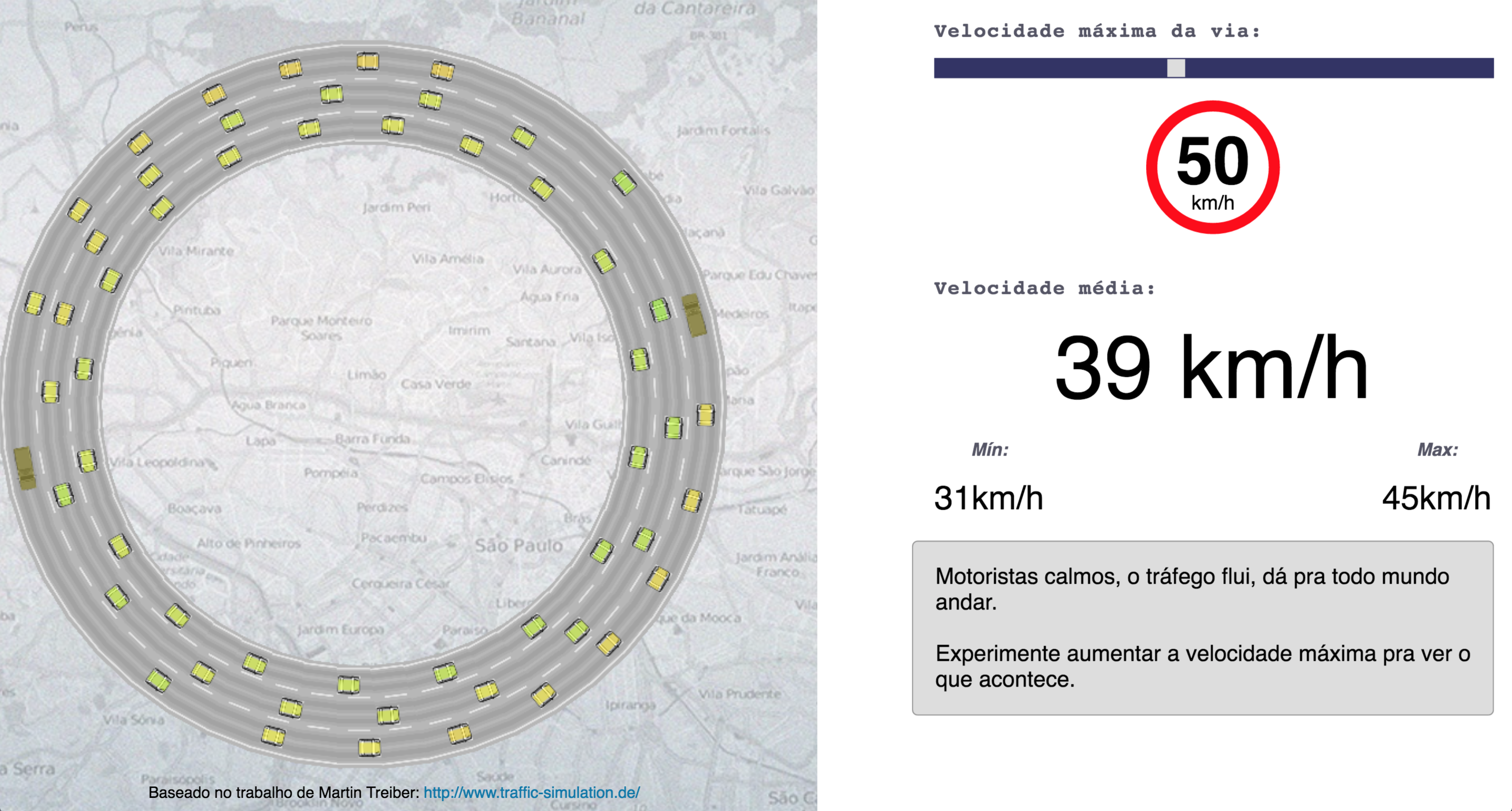 Cars travel around and around in circles until, suddenly, a traffic jam is formed. What happened to slow the cars down? The speed limit on the road was raised. It may sound counterintuitive, but that is exactly what a traffic simulator built by the Brazilian digital studio Hacklab has shown.

Aiming to break down one of the most polarizing issues of São Paulo’s recent municipal election—how speed limits are affecting traffic in Brazil’s largest city—and advocate in favor of slower speed limits, the simulator was released by the studio just days before elections in Brazil earlier this year and quickly became a hit, galvanizing voters and prompting widespread discussion on the matter.

São Paulo saw its voters divided between those for and those against a decision by incumbent mayor Fernando Haddad to dramatically reduce speed limits in an effort to improve traffic and diminish the human cost of automobile accidents in the city.

João Doria, who ran against Haddad, was one of the most vocal opponents of the policy and ended up winning the election. Since then, however, he has backpedalled on speed limits and admitted to the possibility of not changing them at all.

Storybench spoke with Luis Henrique Fagundes, co-founder of HackLab and a developer of the speed limit simulator, about how the project was built.

Hacklab creates digital solutions for a more ethical society. We believe that technology is never neutral. That is what guides our relations with employees and clients, with whom we look to develop political action.

How did Hacklab come up with the simulator idea?

I have known about the concept of traffic jams being a result of speed excess for a long time. Last year, when I saw a video on WhatsApp of mayor Fernando Haddad being mocked for saying that reducing speed limits increases average speed, that stuck with me. Whenever I explained that to a Taxi or Uber driver, I saw how their perception about the transit policy would change. During the campaigns, the topic was very heated. I read an article on Vá de Bike about a simulator built by Martin Treiber.

I decided to record a screencast while playing the simulator to demonstrate how increasing the speed limits actually worsens traffic flow. After one hour of recording and never being satisfied with the results, I realized it was impossible to communicate the message without showing the average speed. Suddenly, I was [re-envisioning] the whole project.

So who is Martin Treiber?

Treiber is the chair of the Department of Traffic Models, Econometrics and Statistics at Dresden University of Technology in Germany. His simulation is a very rich and comprehensive work, full of variables and simulated scenarios.

What languages were used to build it?

The algorithm we used is the same as the original, by Martin Treiber, built using HTML5. The work was actually more about taking things out than it was about building over it. I kept some parameters fixed and removed many of the interface controls. I also changed the background image and established the maximum, minimum and average speeds.

Originally, we were not going to publish the simulator, so I never really worried about different screen sizes. It was a “minimum viable product” and I didn’t waste time worrying about things that didn’t have an effect on the user experience.

How did you deal with copyright regarding Treiber’s work?

As an HTML5 project, the code was accessible. On a Wednesday morning, the evening before publication, I started to code a better interface in a video, which was the original idea. By the end of the morning, I presented the product to our team and we brainstormed ideas for the narrative. That is when we decided to publish both the simulator and a video.

Then, I contacted Martin Treiber, explained the election scenario and our intention. That night, he responded authorizing the publication. After the project went viral, we talked again and he told me he had decided to make the application public via a GPL license. We are now preparing our source code to be made available via GPL as well.

How were the figures and format of the circuit chosen?

In São Paulo, there is no one traffic density. During the night, when fewer cars are on the streets, increasing the speed limit will result in a higher average speed. During rush hour, it will be irrelevant.

With the first videos I recorded with Treiber’s simulation, I played with density to explain that higher average speeds only happen with low vehicle density. But that made the video too long and it would be one more explanation that wouldn’t have much impact.

Traffic in São Paulo is better and our goal was to point out that lowering speed limits may play an important role in that. The oval format is fairly instructive, allowing one to show that traffic jams are a phenomenon of vehicle dynamics and not based on external interference. That is why this project is so striking.

What was the main goal of the project?

São Paulo is a very agitated and violent city, which is reflected directly in the number of traffic fatalities. During the campaign for the last election, the debate about speed limits was focused on the protection of lives, and that didn’t seem to mobilize the electorate, especially those against the lowered limits. We then looked for arguments that would change their perception.

Our goal is to save lives. We want to influence policies and the next administration.

How has the public responded?

The simulator had huge repercussions in Brazil, with over 13,000 shares on Facebook and over 800,000 views. It went viral after the post was picked up by Midia Ninja, which has a following of over one million people, four hours after being published. Also, Huffington Post Brasil and Catraca Livre [a website focused on art, culture and urban matters, and one of the largest in the Brazil] wrote articles about the simulator.

The project also generated discussion as it was very critical of what many candidates had been campaigning for, especially João Doria, who would win the election and whose slogan was “Accelerate, São Paulo.” We had more than 1,500 comments on Facebook and they were very polarizing.

And now we see Mr. Doria, after winning the election, backpedal on his position about the speed limits. We hope to have contributed to that.

After this project, what is your take on interactive content?

Clearly, this message was very strong. It was already a divisive issue, which makes people more prone to accept or deny the message. The result was that one group overstated the message, while the other dealt with their conviction contrasting with their experience in the simulator.

My perception is that interactivity brought plenty of credibility to the message. What was before my point of view became their own experiences, narrated in first-person.