Eight ways journalists are visualizing the wildfires in California

California officials and firefighters are becoming increasingly concerned that the drier, windier conditions spurred on by the warming climate will make wildfires more devastating and their seasons longer. But are enough people paying attention to their root causes and dire consequences? Storybench rounded up eight ways U.S. journalists are chronicling this year’s wildfires.

Wired’s “Whodunit” piece takes a deep dive into the world of fire investigation and follows one of the country’s most renowned fire experts, Paul Steensland, as he explains his methodology for finding the ground-zero of each complex. The article, written by Robbie Gonzalez, draws particular attention to the seemingly innocuous items that can lead to a large conflagration – a small match head or even a piece of scrap metal are cited as the most common igniters.

From flagging the burn zone to combing through acres of charred soil with powerful metal detectors, magnifying glasses, and evidence collection kits, this is sleuthing of Biblical proportions. Like an episode of “How to catch a serial killer,” we learn not only of the tools utilized but of the anatomy of a wildfire. For example, readers can learn about the apex of a fire, its flanks, and which of the two burns the fastest – perhaps something that could save the lives of those who must evade future paths of destruction. Other indicators within a fire’s wake, like the desiccated leaves of treetops, which often point in the direction of this elemental assailant.

This Washington Post time-lapse of smoke billowing across the U.S. is incredibly fascinating and incredibly sobering. Scale is everything during coverage of wildfires, but seldom do we get to see satellite data of a smoke trail, comparable in scale to that of a hurricane, expanding across the country and over seas. The maps provided by NOAA show patches of red, which indicate active fire complexes, while the varying shades of browns and beige show us the concentrations of smoke being produced. Presenting the data in this manner makes the Western American wildfires feel less like distant problems and more like imminent dangers on a national level.

Photojournalism on the ground in Northern California – The New York Times

The New York Times brings us photojournalism from California that is both heart-wrenching and surreal. It’s impossible to call such work antiquated when photos like these continue to offer us a sense of the fire’s severity. In these apocalyptic-looking shots from areas like Santa Barbara and Santa Rosa, we get a true sense of how bleak the quality of life in the arid hills of Northern California is becoming. From sightings of fire tornados, to thick hypoxic air and devilishly red skies, this is truly is hell on Earth for many of the state’s residents. 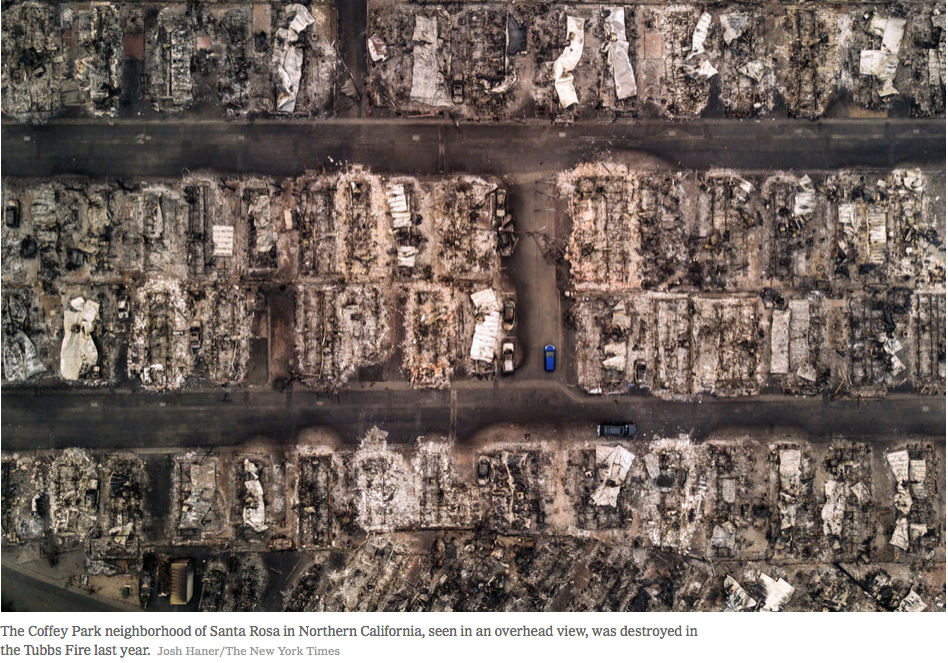 A timely review of drone application as firefighting technology – CNET

CNET’s recent piece on drones offers us a glimpse at the prospect of quicker response times for firefighters, who have to become more omnipresent with the rise in wildfire frequency across the state. This is wildly beneficial for a number of reasons. Namely, it reduces the need for manned aircraft, which is often costly for the state and dangerous for the response teams. Equally as important, drones at a bird’s eye view can be programmed to monitor conditions that are essential to know for disaster management. For example, drones registering wind direction and intensity can help firefighters determine a system’s future course, then issue necessary warnings to vulnerable communities (along with valuable infrastructure and energy buildings) even sooner. This may allow first responders to prioritize quadrants of the complex to quell first. All-in-all, technology may be keeping pace with some of these climatic repercussions. EdgyBees, which specializes in AR for cars and drones, is even piloting software that will allow drones to relay valuable orientation information to users. 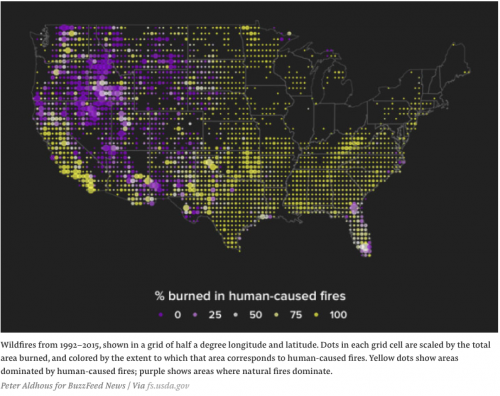 It’s hard not to think globally when seeing NASA’s latest take on the Western American wildfires from the organization’s Earth Observatory. This map represents a myriad of aerosols traveling through the air, but pays particular attention to ash, smoke, and dust – the red around California is black carbon. CNBC’s breakdown of the NASA’s recent posts includes it’s disclaimer, reminding us that the data illustrated is predicated on mathematical models and predicted real-world weather conditions. One thing’s for sure, the effects felt from from the California wildfire smoke will not discriminate based on country; the fires now will have global effects. 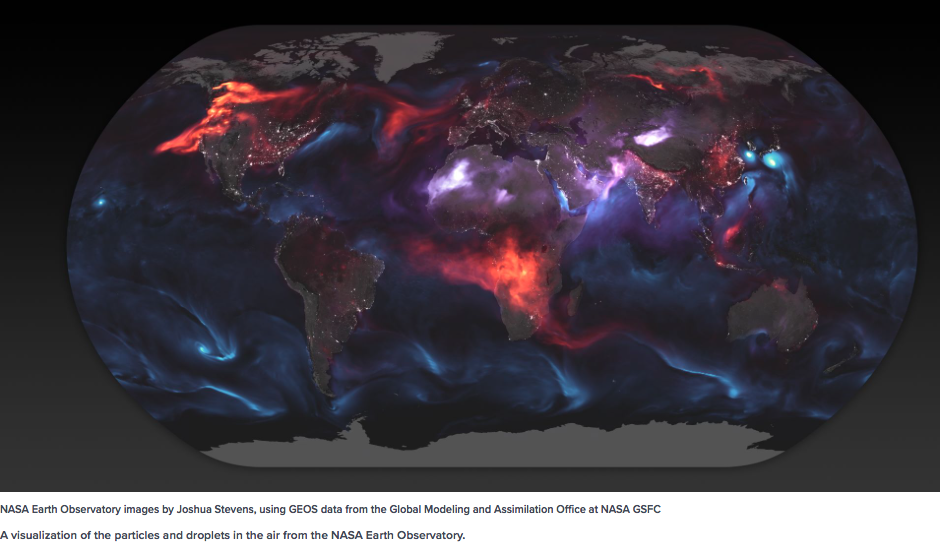 A video analyzing infrastructure’s relationship with fire frequency – The Verge

Fire frequency in California isn’t entirely caused by human objects and climate change. The Verge recently released a short entitled: “Why wildfire season never stops,” which investigates the barriers, or lack thereof, that allow wildfires to rage with less and less hope of containment. Power lines, for example, are too often the culprit during heavy winds. With California’s drier weather, knocking one power line over is as sure a start to a wildfire as flicking a standing match stick into a tinder box. With regards to urbanization, Verge correspondents Rachel Becker and William Poor note that homes are ‘often bought and sold in fire-prone areas’ (more than 40 percent of homes in California). Suffice it to say, where we build and how densely we build can affect fire duration and travel time. However, this can also include man-made buffers like golf-courses and football fields, which boast little to burn. But this isn’t SimCity. Such changes will require quick and serious municipal decision-making, much of which don’t have time for.

Vox put together a crack team to create a short video that focuses on the connections between urban sprawl and fire. Their use of map overlay [1:24-1:42] between residents and that of areas most prone to fire even further elucidates this relationship, showing that the chief catalysts for fire’s like Mendocino or the Carr complex are largely household items – in the case of Carr, a spark from a tire rim.

Daniel Hentz
Daniel Hentz is a graduate student at Northeastern's School of Journalism.