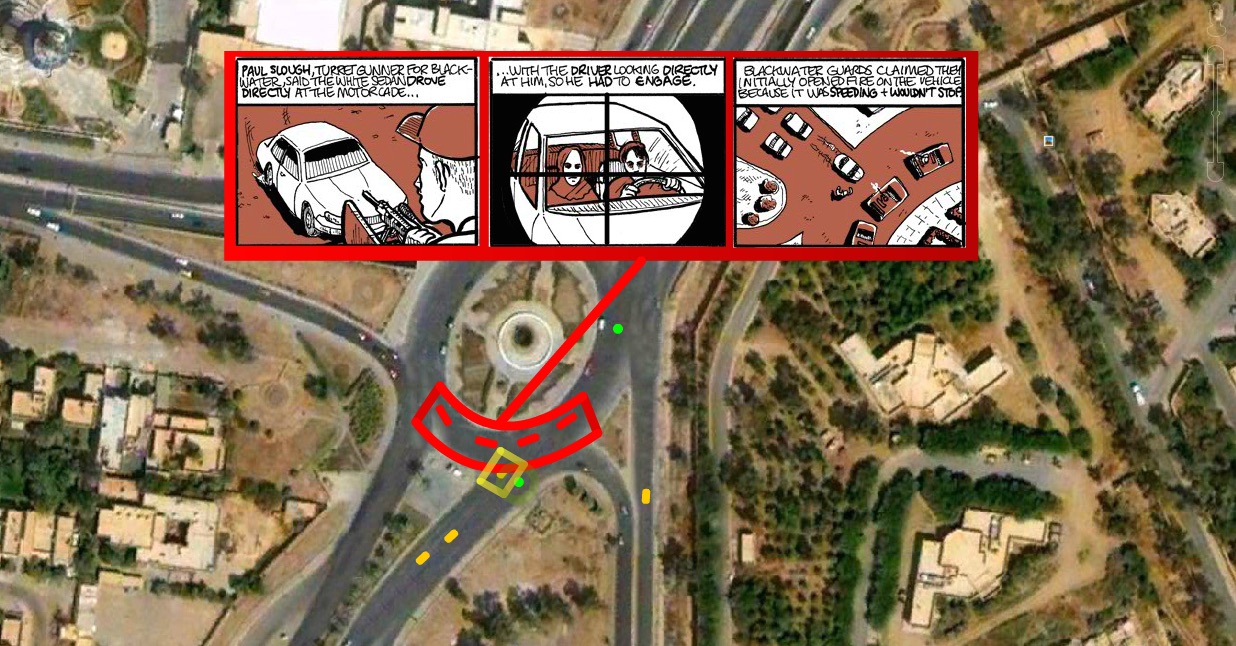 How an interactive comic explained the Blackwater debacle in Iraq

Four former military contractors were sentenced this week to lengthy prison terms for killing 14 unarmed Iraqis in a crowded Baghdad square on September 16, 2007. The Blackwater security contractors had been part of a heavily-armed convoy patrolling through a traffic circle in Baghdad’s Nisour Square when they stopped and fired at several cars with Iraqi civilians. The contractors claimed they were firing on insurgents. The handful of civilian witnesses claim the atrocity was unprovoked.

In 2010, while on a John S. Knight Journalism Fellowship at Stanford University, journalist and comic artist Dan Archer decided to illustrate the 2007 Blackwater incident. Archer was just starting to experiment with interactive comics and decided to illustrate the incident. Built with Flash and comprised of a timeline and many panels of hand-drawn comics, the interactive project is a powerful, bird’s eye view of the debacle. Archer shared his process with Storybench. 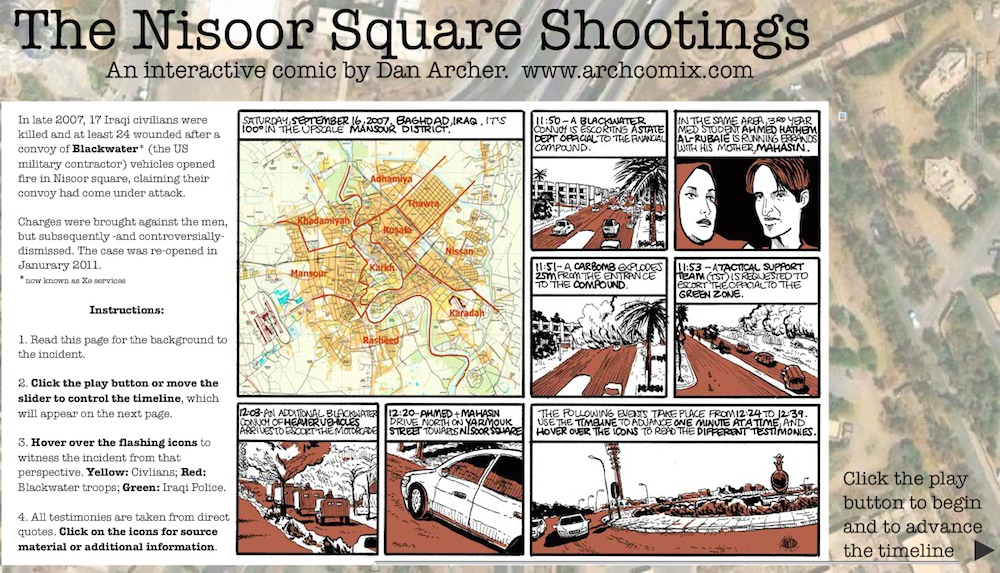 With Blackwater incident back in the news, is your project getting more attention?

Definitely. It’s proof that these things have a long tail. It happened in 2007, I made it in 2011, and here we are eight years later and it’s back in the news.

Why did you decide to illustrate this incident?

For me it was the sheer scale of the brutality, it was a total bloodbath. I wanted to peer through the sense of outrage and show the human side of these testimonies. When you read through an account, it’s awful, but after the fourth or fifth person you lose your sense of engagement. With a narrative there’s more of a through line. [The interactive comic] was done in response to how desensitized we were to the war. When it happened, it was just another debacle in the Iraq war.

Why did you choose an aerial view?

I wanted to figure out how to include so many different testimonies but layered in a way that wouldn’t conflict visually, though of course they conflicted narratively between the victims and perpetrators. I chose an aerial perspective because you need an anchor, who’s coming from where. I was trying to put myself in this perspective. 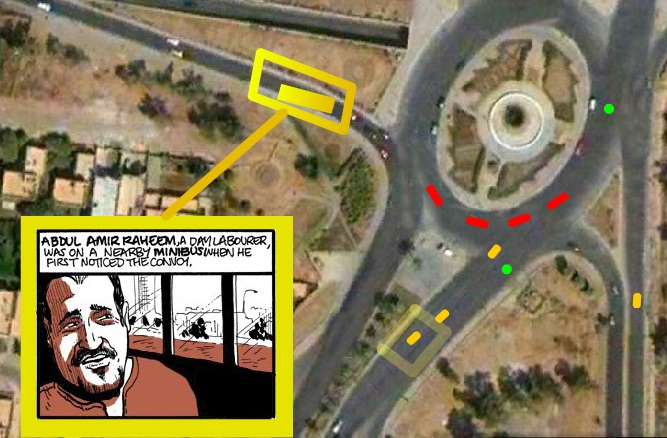 It seems like your layout helps balance the testimonies.

By using the rollover mechanism you can’t give more real estate to one side over the other. And most of the comics are just two or three panels.

Where did you get the reporting?

I lent very heavily on previous reporting. I relied on Jeremy Scahill’s book on Blackwater, too. If you click on the links, they will take you to the source of the reporting. I had pictures, reporting and video that was shot on the scene. 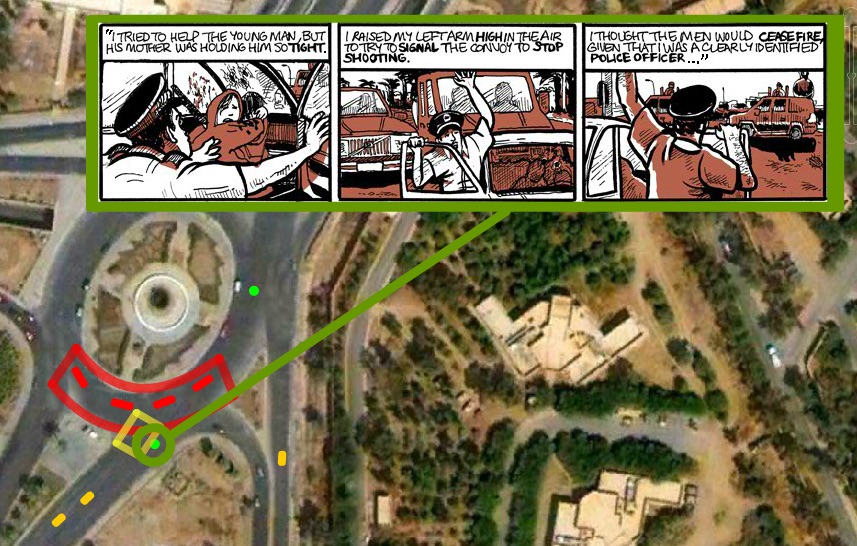 Why does an interactive comic work well to convey this kind of story?

With all the reporting around this incident, we tend to get the main points of the story. The précis. Twenty-four were wounded. This many people died. But we don’t get the “how did this actually happen?” One person made one bad call, firing at a civilian mistakenly, which immediately escalated into him and his entire team treating everyone at that busy intersection as a hostile. My intention wasn’t to show that the Blackwater people are inherently evil. I wanted to show that this is a microcosm of a problem where you have heavily-armed contractors in situations outside of their regular training. You can draw parallels with the police. If I had just made a text rollover box on top of images, that wouldn’t have nearly the same sort of impact. Instead, I could literally draw the simultaneity of it all and including all the testimonies. You can see how Blackwater’s account is diametrically opposite to the other testimonies. 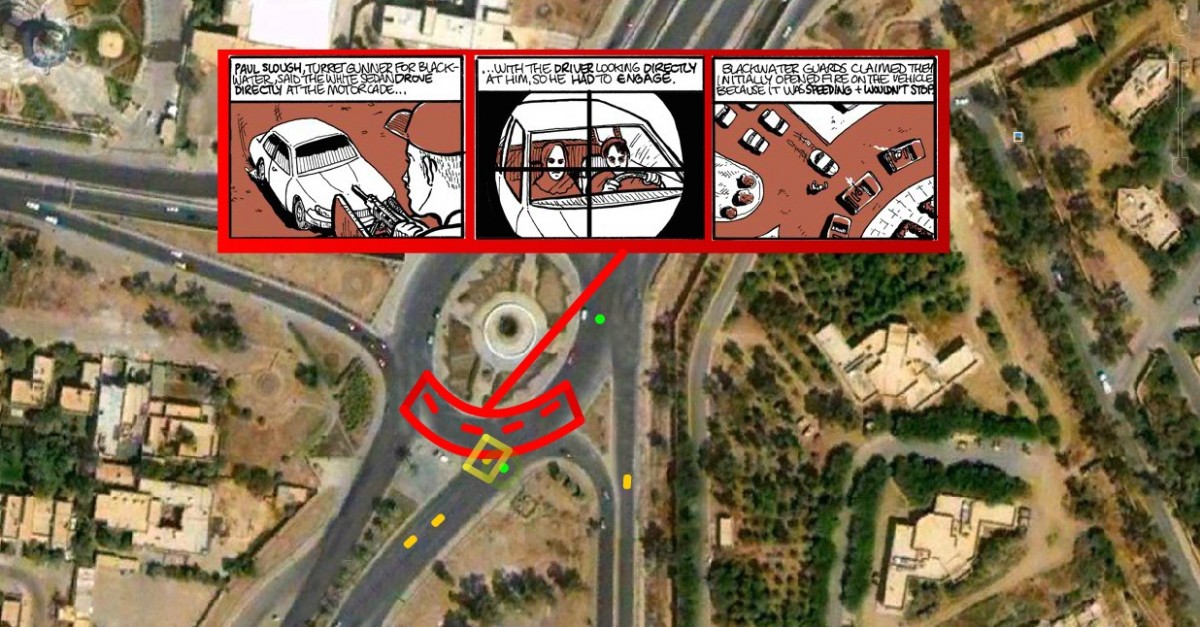