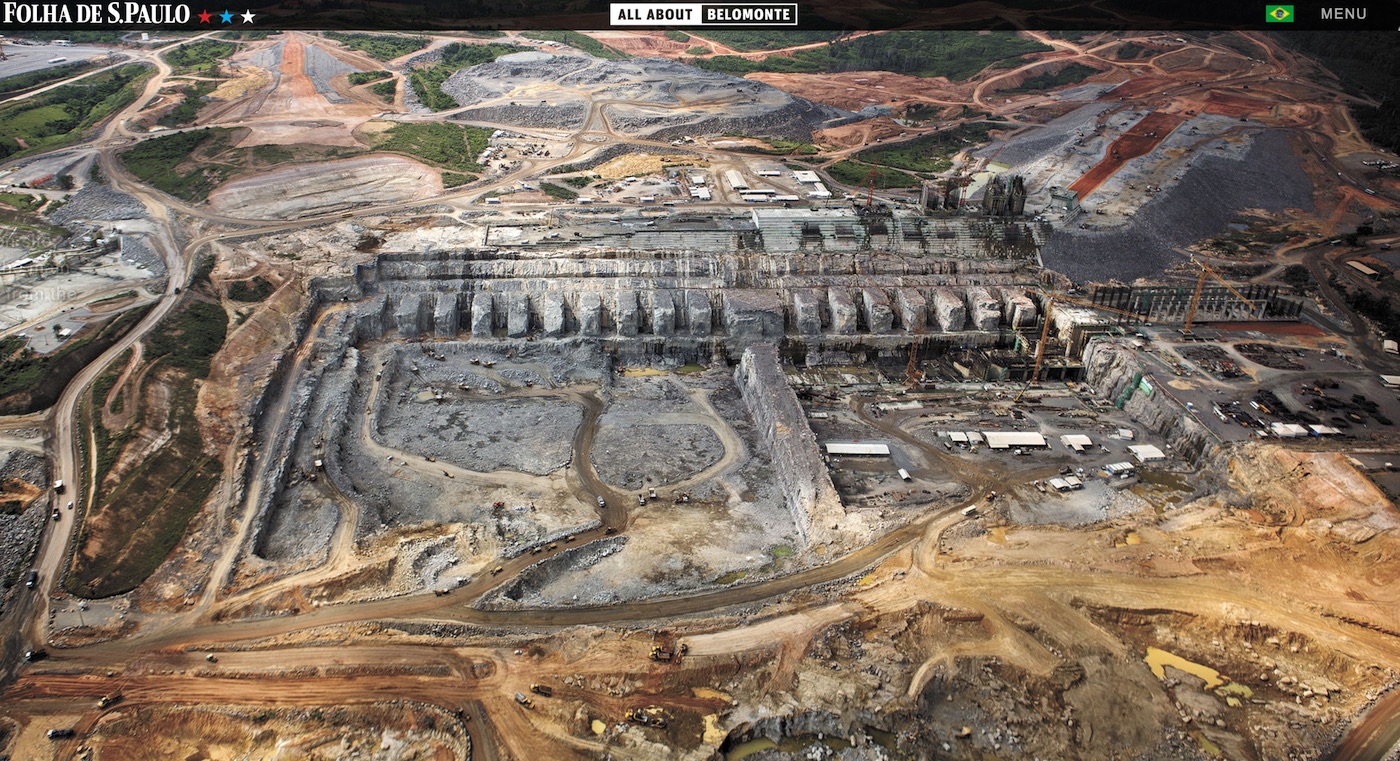 For years, Folha de São Paulo, one of Brazil’s largest newspapers, has been at the forefront of digital experimentation. Its interactive, multimedia series “Tudo Sobre” (“All About” in English) – launched in 2013 with a project focused on the construction of the Belo Monte dam in the Amazon. Since then, the section has explored other large, controversial themes like the Zika outbreak, the 2016 Rio Olympics, the country’s water crisis and Brazilian deforestation. Most Tudo Sobre stories are translated from Portuguese into English and some even into Spanish.

Storybench spoke with Marcelo Leite, a veteran reporter and one of Tudo Sobre’s creators, about how he coordinates his team of reporters as well as Folha’s approach to longform storytelling.

It all started with the “Battle of Belo Monte.” Tell us how this story came to life.

The newsroom directors knew about my previous interest in environmental issues, something that I have been covering—including the construction of Belo Monte–for many years. The direction was quite broad: “We want to do a special [project] on Belo Monte, which we think is controversial and people do not have much information about.” They also wanted to do something a little more ambitious on the multimedia side.

I thought that was great. At that point, I had seen The New York Times’ “Snow Fall” and thought it was very interesting. I wanted to devote more to this longer-form, narrative type of journalism. I decided to take a quick pre-production trip to the region to figure out logistics and the editorial side of the story. Then, I put together a plan to make it happen. In the meantime, I found out that Lalo de Almeida [a photographer who also collaborates with The New York Times] had already been to Altamira on some personal endeavor.

So out of the Belo Monte project, the “Tudo Sobre” series was born?

The concept was developed there. We wanted to provide as much information as possible about an issue, a relevant question on our national agenda. At the same time, we also wanted to apply multimedia and longform storytelling techniques to go deep and beyond a dossier—it was never supposed to be a mere gathering of information. The concept, I like to say, was to bring the readers there. Show the people, the construction site, the indigenous, the city, the violence, the environmental issues, the nature, etc. That was the concept and, during editing, the name “All About” came up.

Which projects were next?

We did “Crystal Unclear” [about the water crisis in Brazil], a story I proposed. It was a little different in the way that every chapter was about very different things. The unifying theme was water resources and the consequences of climate change.

Then, the third project I was involved with was “Endless Forest” [which explored deforestation]. It all started with a conversation that led me to the people from the Climate and Land Use Alliance (CLUA), a collaboration between international foundations on climate change and the use of land by agribusiness companies. They wanted to produce something before the 2015 United Nations Climate Change Conference in Paris. Since deforestation is arguably the largest issue related to climate change in Brazil, we created this project that was sponsored by CLUA. We were careful to clearly disclose that in the piece.

How does Folha create these projects? How many people on the team?

We do not have a special unit, so we rely on teams drafted from our newsroom: reporters, photographers and videographers, video editors, visual journalists, web designers. Sometimes we even hire freelancers if there is not enough manpower available within our ranks. We often hire people from outside for the visual and web development side of these projects.

The size of the teams between stories varies as well. They can go from 6 to 12 people on the reporting side but, when it is finished, with video editors, narrators, coders, web and graphic designers, the team can tally up to 20 or even more people. But there will always be a core of 3 or 4 people who coordinate each area—reporting, video, infographics and web design—from start to finish.

What about the teams you dispatch all over Brazil?

There are usually teams of 2 or 3 people, though I believe there were instances where 4 people travelled together. There will always be a reporter with a photo/video person. We find it really important that this visual side has a unity, a unique approach, which is why we try to schedule trips in a way that the same photographer and videographer can be there. For “Endless Forest,” we did it so that Lalo de Almeida could be there for all trips.

And what is the timeline for creating an “Tudo Sobre” story?

“There will always be a core of 3 or 4 people who coordinate each area—reporting, video, infographics and web design—from start to finish.”

It is very hard to pin down, but I can say that, for the first one, on Belo Monte, it took us 10 months to complete everything. But it was the first one. The one on water crisis was finished in about 4 months, while “Endless Forest” was one of the quickest pieces: we did it in 3 months because we wanted to publish it right before the start of the Paris summit. Also, the contract negotiation with CLUA took time.

I would say that if I were to coordinate another one of those projects now, ideally we would need 4 to 5 months. It is a slow process because editing alone can take a month. Generally, we write 2 or 3 versions of each chapter. Infographics, photo and video, and web design, all that takes time. We also make a special section for our print edition with 4 to 8 pages, which is also edited during this monthlong period.

Tell us about the multimedia piece you did on the Antarctic.

Actually, that was my third trip to Antarctica. Lalo de Almeida and I went there last December because of a new building Brazil is building at our base. He is a very talented photographer and videographer, with this multimedia vocation. And Antarctica is a visually appealing place that almost nobody has ever been to, so there is a lot of curiosity about it. We spent a whole month there and about two weeks in the Brazilian station. So, we wanted to show all that in detail, but not with an excessively long piece. We edited it a lot and included lots of videos, including some with the new 360 camera we had been experimenting with.

But that was not an “Tudo Sobre” story. Why? Where does Folha draw the line for the series?

We had the discussion of labelling the Antarctic piece “Tudo Sobre” but decided not to. It tends to be more about issues, about broader themes. In the Zika piece, the issue was public health—and we went to Uganda and to Brazil’s Northeast region. In the Olympics piece, we addressed the city, public safety, infrastructure, etc. On the piece about the 1964 Military Coup, there was this intention of creating a historical account. They all have this drive of creating a narrative dossier about nationally-relevant topics—which I know sounds a little open-ended—as opposed to a very confined story like the construction of a new building for the Brazilian Antarctic base.