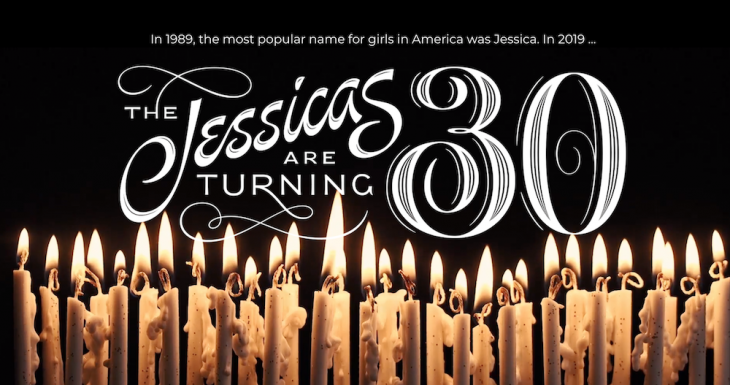 In 1989, the most popular name for girls was Jessica. This year, those Jessicas are turning 30 and they represent the midpoint of the oft-mentioned millennial generation. As they begin the next decade of their lives, many of them are grappling with the gulf between where they thought they’d be at 30 and where they actually are.

The Lily, a product of The Washington Post that focuses on millennial women, wanted to create a portrait of life at 30 by telling the stories of ten Jessicas as they approach this milestone. The resulting project, “The Jessicas,” uses in-depth profiles, a documentary, data storytelling, and the innovative use of Instagram to paint that picture.

Amy King, the editor and creative director of The Lily, spent a year and a half working with her eight-person team and various departments across The Washington Post newsroom to create this project. King spoke with Storybench about how the ambitious project came together.

How did the idea for this project arise?

I had the initial idea but the whole Lily team had been wanting to do a bigger scale project for a while. I wanted to think of something where we could really collaborate with teams across The Washington Post and really spend a lot of time to create a story with impact. The Jessicas is really the first time we’ve done something like this.

Our team right now is made up of all millennials, and three of those people are turning 30 this year. Everyone else is right around that age so it’s something that we talk about a lot. How are people feeling about when it’s their turn to go from their 20s to their 30s? Thirty also happens to be right in the middle of the millennial generation so it just seemed like an interesting opportunity to look at the state of 30 in America today. That was the main goal and the Jessicas part was just sort of an interesting, fun way to get people into the project.

Why did you decide to tell the story with so many different media?

From the beginning we knew that we wanted the story told in all of these different places. Part of the way we told this story was with the Instagram account where you can actually experience the whole project on that account. It was an interesting experiment because we decided to post all the posts at once and there were 87 posts. So for the people who were following it already, it was definitely annoying because it flooded their feed with all these posts.

But I hadn’t really seen a story from a news publication where you could just give someone a handle and say, “Here, experience this how you want.” You can pop in and out of posts if you want, or you can scroll from the very top and get all the information you could get on the website. Although, on Instagram, we were able to incorporate more video and audio.

How do you split up work when you’re working with an eight person team?

We worked with the design team at the Washington Post for the web aspect. This is the people who design the print paper and a lot of the enterprise features for the website. They have a team of over 20 designers and this is the first time that my team worked with them. We told them what we were hoping for and they helped us make something really beautiful.

We also worked with freelancers from all around the country to tell the story. There’s something called the Washington Post talent network and we tapped those freelancers from all around the country to find the Jessicas and Jessie. They each found three to five Jessicas and we had each of those Jessicas fill out a survey to tell us a little bit more about themselves. Then Neema Neema Roshania Patel, our deputy editor, and I went through those surveys and narrowed down to the ten people that we thought would be most interesting to feature.

What was most striking to you about their stories?

The stories were a bit more sad than I expected. I think that’s something we heard from a lot of people who read the stories. I got to meet several of the people that we featured when we went around filming for the documentary and I think despite the tough times that these people may be going through, they’re also pretty positive and hopeful for their futures.

How did you use census data to create the profile of a woman who falls in the middle of 30-year-olds in the country?

When we first started the project we wanted to have the Jessicas, but then also have a piece that just talks about the general state of 30 in America today. This was also another opportunity for us to work with a different team at the Post. Our staff writer Caroline Kitchener sat down with Brittany Mays from the graphics team and they crunched the census data and came up with this data set. Then Caroline took that and tried to find someone who fit it. Sam is an example of the median woman in America today and Caroline does such a beautiful job with that story. If you read the comments you can tell that people feel really connected to her.

What were some of the challenges in reporting this project out?

Just finding the people was incredibly difficult. It was really important to us to find a diverse group of people in a lot of different areas. It’s hard when you’re choosing ten people and you want to represent as many groups as possible. I think in the end we did a pretty good job but you always feel like you’re not representing someone.

When you do a project of this scale, there are just so many pieces of it that you have to keep track of. We worked on this project for a year and a half, but still the day before it published we were running to do last minute pieces of it and making sure that we were going to promote it in the best way possible. Being able to work with teams across the Post was amazing, but because it was the first time I was doing something on this scale, I learned how to organize to make sure other teams are working on the same timeline as you.

How do you think about audience when publishing content?

A lot of our stories are about millennial women or women in general and of course those are going to appeal to women, but really everybody should be reading those stories. We have a lot of opportunities to get these stories in front of other people at the Post. We have a module on the Washington Post homepage and we publish all of our stories on the Washington Post Apple News so we do find that we reach a wide audience, especially on those platforms.

What has the response to The Jessicas been?

The feedback has been really positive. It was exciting because different people in the industry have been sharing it and it was exciting for me that The Lily put something out of bigger scale that people noticed. We had a reader write in and tell us how much they appreciated all the different audio, video, and social components of the story. The best response from readers is that they’re happy we found such a diverse group of people to feature and they’re excited that these different voices are given a platform.

Zipporah is a student at Northeastern University’s School of Journalism.