As 2016 Olympics approaches, a look back at how The New York Times planned coverage of the Sochi Olympics

More than six months before the 2014 Olympic Winter Games in Sochi, The New York Times  began planning their coverage of the event. With a team of almost thirty people, the award-wining digital graphics department eventually created a mosaic of scroll-through interactives, embedded video, three-dimensional graphics, interviews and explanatory captions.

With a few days to go before the 2016 Olympics in Rio de Janeiro, Storybench spoke with Joe Ward and Graham Roberts, graphics editors at the Times, about interactive storytelling, the endurance needed to plan and execute digital sports stories, and the paper’s plans for covering Rio 2016.

How long did it take from brainstorming meetings to final product? And how the idea of making interactive pieces came up?

Joe Ward: For the Olympics, it is very important to get started early with ideas because there is a narrow window of access for the athletes. Taking the Ted Ligety piece for instance, we first approached him in August 2013 with the idea of trying to do something with his technique. After he agreed, he suggested we go to Colorado in November, a time he would be training on snow but still weeks away from competition. This way we could get what we needed – him skiing on snow – without disrupting his schedule or focus. It is difficult to get good access to athletes when they are in the middle of their competition schedule.

The interactive pieces consisted of still photography, video, 3D animation and text. But for the audience, it only consisted of scrolling. We have found that users don’t want to do much more than scroll, so we try to keep the interactivity to a minimum. That is why the video starts when you scroll to it instead of having to start the videos with a click.

Graham Roberts: I believe it was a matter of it being a more engaging way for people to approach the subject matter. Video works well, but this edit has a key thing that it puts the reader back in control in a sense. It made it feel like a living article, even though when you break it down it is composed of an arrangement of videos. That appealed to us. Putting it together in this way gave us a different kind of a feeling that I believe readers responded well to.

Did you draw on previous work for inspiration?

Roberts: I think everything we do is kind of already there in the sense that few of the projects are completely original without any references to what we have done before. I think the way they work sort of has a natural origin on the scroll-based work we have been doing since Snow Fall.

Snow Fall was primarily meant to be a reading experience and this is where the whole scroll idea flopped by our heads a little bit. It was a watching experience that you interacted with scrolling through. It was a sort of a video storybook. There were also some “cards” that would give a little more context on what we were watching.

How many people were on the team and how was that assembled?

Ward: That sounds about right. There were colleagues from the graphics department and from video who collaborated on this. We have a large graphics group but it consists of people with a variety of skills. Some are good at 3D animation, others are good at reporting and editing, some are good at design and coding, so the teams consisted of a variety of skills. Some of the video was done by graphics but we also used videographers from the video department who brought a creative eye to shooting.

What were the factors involved in the choice of the six stories?

Ward: We tried to get a good mix of sports but also making sure we had a good story to tell. We don’t want to make these simply to show how these sports are played, but rather why these athletes are different or better than most everyone else. 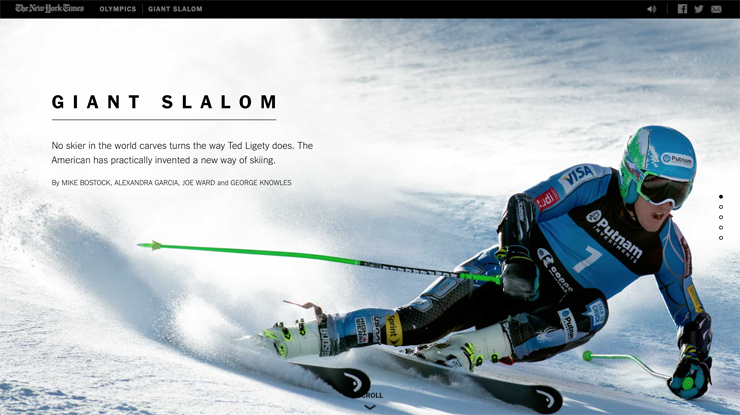 What tools did you use?

Roberts: The interactive part is really just custom scripts that consist of regular web development that our folks modified. The actual elements we used are typical in video editing: software like Adobe Premiere and After Effects, and Maya for graphics. We had people out there going to the trainings and shooting those images. On the luge interactive, it was a GoPro attached to a helmet.

Is the reproducibility of this kind of work an interest being raised in your newsroom?

Roberts: It is not a huge interest, I believe. Honestly, everything we do is just about that one project. I’m not saying we don’t reuse pieces of what we have already done in subsequent projects. It is not a format we are trying to do over and over again.
This was an interesting way to tell the stories with Sochi. That’s just the way we work, with of custom approach for each project.

Ward: We try not to repeat ourselves, if possible, so we will often try new ways to tell stories, whether it is with new technology like motion capture or finding clever ideas to make the public’s experience more personal. We will be exploring some sports and athletes as we have done in the past but we will try to make it a different experience for the reader. Other than that, I don’t think we can tell you too much about our plans.

Roberts: We may use things that worked in the past but I wouldn’t expect the same thing again.