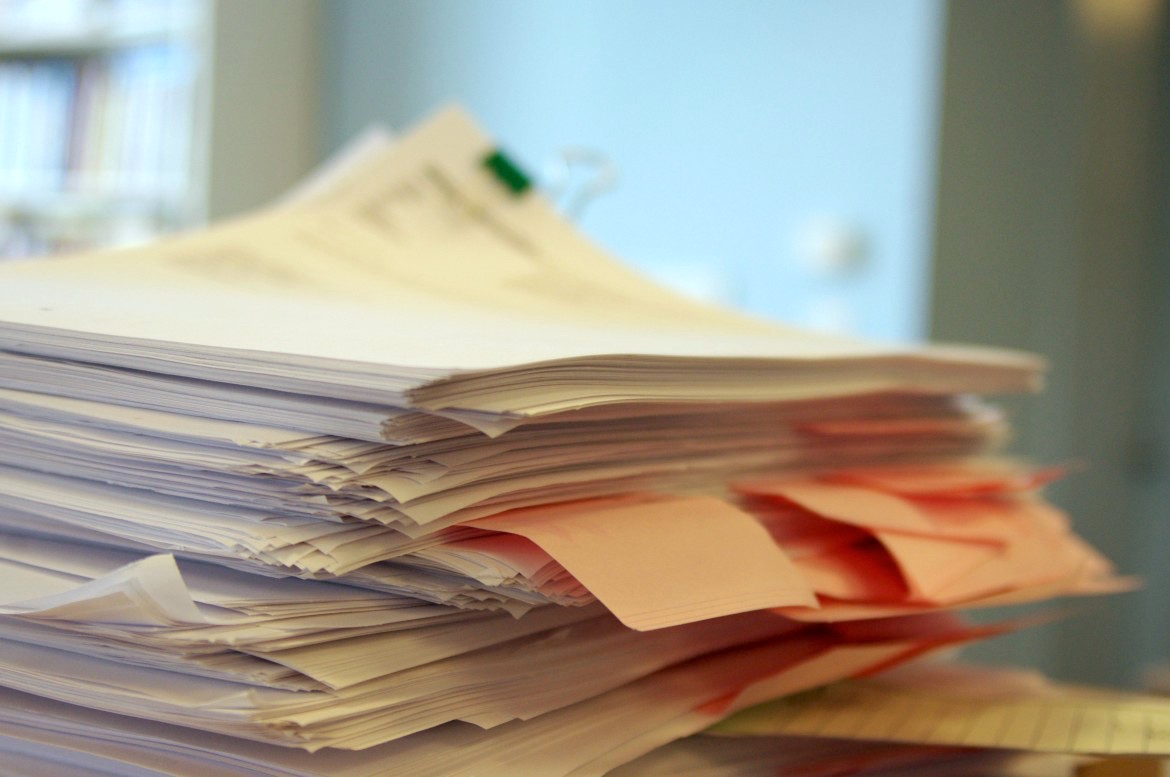 The New England Center for Investigative Reporting (NECIR) recently published a data-driven investigation into the stories of children–generally under the age of three–who are killed or abused by caretakers. In collaboration with The Boston Globe, NECIR senior investigative reporter Jenifer McKim made a public records request for information on child abuse and neglect deaths in Massachusetts and spent months analyzing the data and bolstering it with first-hand reporting. The result, Out of the shadows, went live last month.

By publishing an interactive website along with a 3,000+ word story on her investigation, McKim leveraged the latest digital tools to shed light on the untold stories of 110 child deaths, many of which, according to her reporting, could have been prevented if state agencies had done their job. Storybench caught up with Jenifer McKim to discuss her investigation, the cost of freedom of information requests, and the digital tools she and her team (which including journalist–developer Joshua Eaton) used to publish the story.

Please tell us a little about your experience in journalism

McKim: I’ve been a journalist for more than 25 years. I started my career at the San Juan Star in Puerto Rico, worked during two different periods at the Boston Globe and for 10 years at the Orange County Register in California.

How was Out of the shadows conceived?

McKim: I have written stories about child maltreatment deaths in California and knew that behind a state’s confidentiality laws hides many tragic stories of children whose abuse and neglect deaths may have been prevented. When I was hired at NECIR, I began to investigate how we could get under the hood of DCF (the Department of Children & Families) here. I learned about new federal disclosure laws under the Child Abuse Prevention and Treatment Act (CAPTA), and filed a public records request. 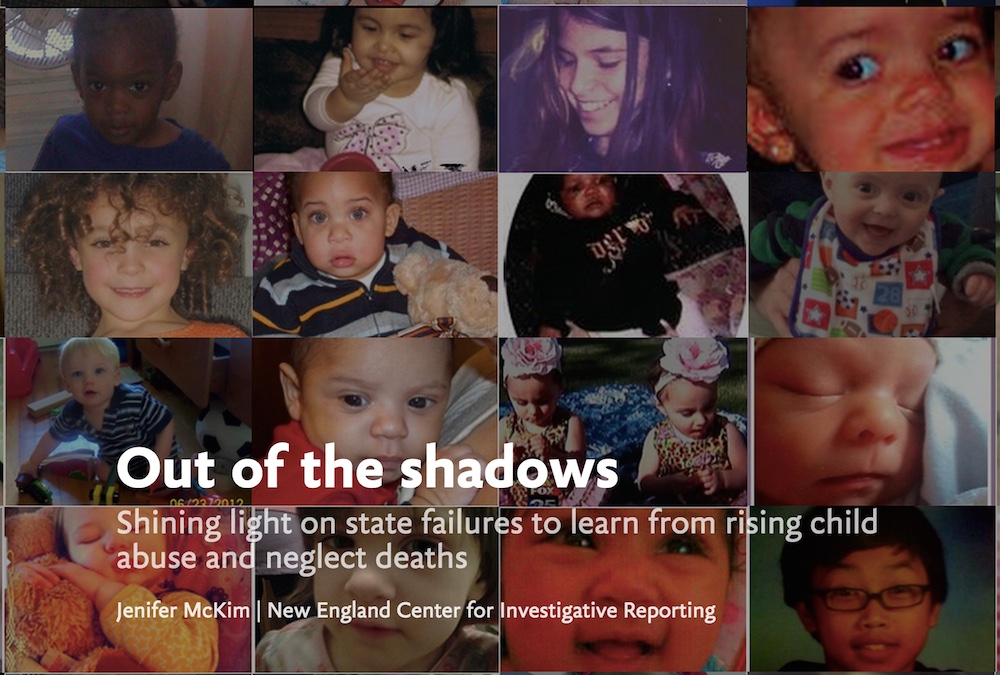 Where did you find your sources? How did you get that 911 call?

McKim: I spoke to people at all levels of the child welfare system: social workers, parents, foster care parents, child advocates and state officials. I obtained the 911 call from the Suffolk County District Attorney’s Office as part of a public records request into the prosecutorial files of Christopher Berry.

The documents you requested and that arduous ordeal did not sound easy nor cheap.

McKim: This project was a collaboration with the Boston Globe from the start. When we were given the final bill, the Globe offered to pay $3,500 and NECIR paid $1,000 to obtain the materials. [Ed note: more on McKim’s process of obtaining the data here].

Any interesting challenges to publishing this online investigation?

McKim: The toughest challenge to this story was getting information about these cases with parents who are hard to reach and don’t want to talk and a state system that is completely closed to reflection. We also struggled to find pictures of kids. I wished we had more but did the best we could.

How did you build the website for the article?

Eaton: The main story is built in Atavist (formerly Creatavist), a web platform that allows users to create gorgeous, magazine-style layouts out-of-the-box. It even lets you preview the piece in both desktop and mobile modes, much like MailChimp and some other services do, which is really useful. We use a pro Atavist account, which lets us brand everything with our own logo and use a custom domain name (http://features.necir.org). For “Out of the shadows,” we used Atavist’s “Thurber” theme, with dropped caps turned on. The main title and section titles use their “Traditional” title design. Everything on the page is out-of-the-box. There’s no custom HTML or CSS or Javascript. It’s all Atavist.

How did you build the interactive?

Eaton: The “Out of the shadows” interactive is a standalone WordPress site hosted on a subdomain (http://untold-stories.necir.org). It uses a portfolio theme, Daisho (http://themes.devatic.com/daisho). The amazing folks at Little Digital Co. (http://littledigital.co) customized it for us, and they did a really great job.

How did you create the graphics, Josh?

Eaton: I created the graphs using Google Sheets’ graphing function, which is really intuitive and spits out an iframe. From there, I simply embedded the iframes using Atavist’s embed function. Helpfully, Atavist built cutlines for embeds into their system. So the cutlines and credits you see on the graphs were added in Atavist rather than being part of the embed itself. 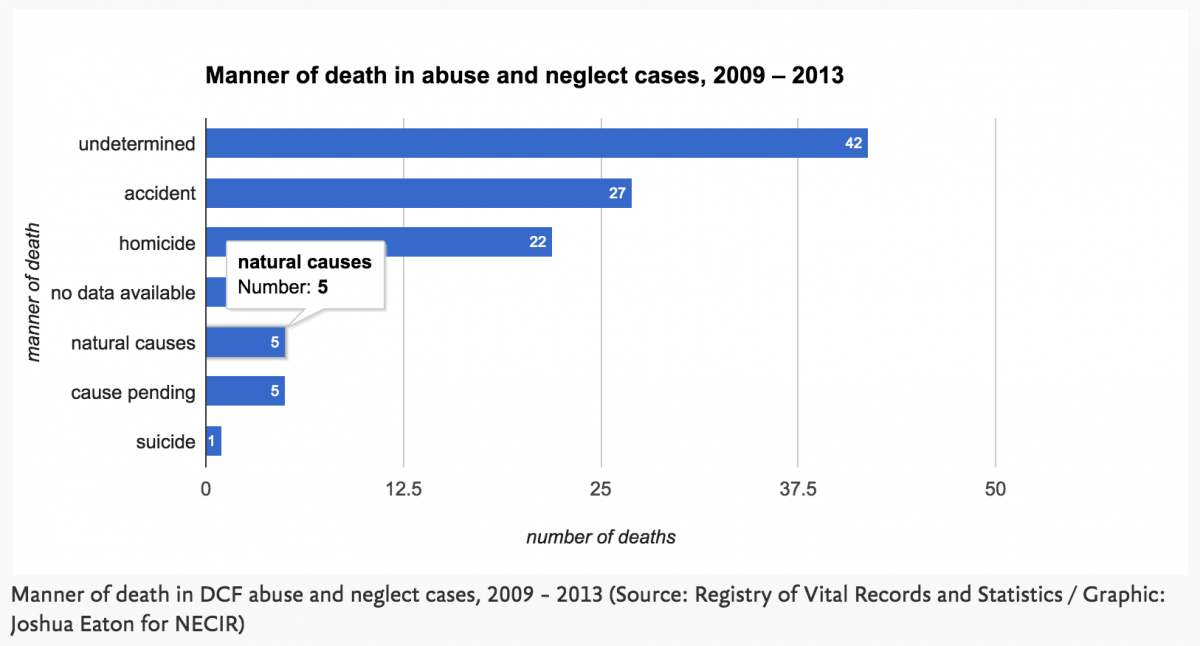 What should investigative reporting students and newsrooms keep in mind when researching this kind of a project in their own city or region?

McKim: They should read the CAPTA law and realize they have the right to ask for information about deaths and near deaths of abused and neglected kids. They also can just copy the public records request that I filed, which can be found in this write-up about public records fight.

What were the immediate impacts from this investigation?

McKim: My understanding is that one of the things the governor is going to be doing is looking at the two-tier system. We reported on that two-tier system where we found kids were dying on the low-risk track. It was raising questions about whether the system was working. It was gratifying that our findings were being immediately addressed. I think that’s because of our ability to show that it wasn’t just one or a few cases, but a history of problems that have contributed to this discussion.

Right after our story ran pointing out that social workers were not required to file a criminal background check on all parents who were suspected of abuse and neglect, the governor announced that CORI (Criminal Offender Record Information) checks would be done on all calls. 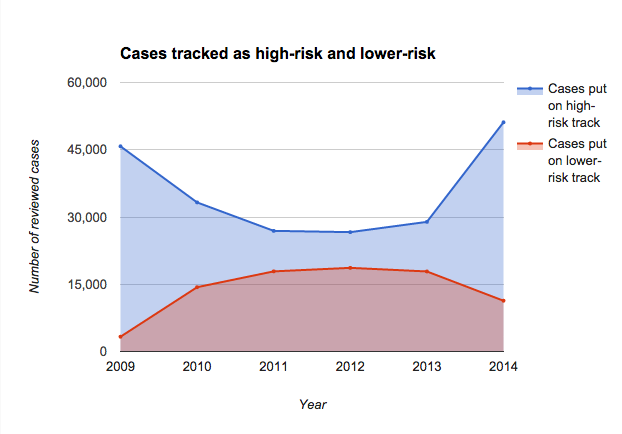 NECIR, the New England Center for Investigative Reporting, is “an independent, nonprofit investigative reporting newsroom based at Boston University and WGBH News and supported in part by New England news outlets.”