For journalism students reporting on climate change, a self-taught lesson in teamwork

Recently I was faced with a dilemma. A speaking engagement I had agreed to was scheduled during the same time as my journalism class. How could I plan something more substantive and worthwhile than bringing in a guest speaker?

As I thought about it, I realized the students themselves could come up with something better than just spending another hour in class. They could carry out a group reporting project on an issue in the news. All they needed from me was coordination and a little guidance. Since I had already bogged them down with other work, I wanted to come up with an ungraded assignment that they could do during the time I’d be gone. But what? 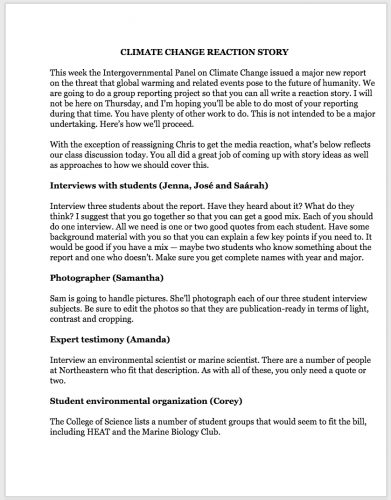 e class before my absence, my 11 students went to work. In groups of threes they brainstormed ideas. What about looking into why an expensive upscale bakery had replaced a popular and cheaper eatery on campus? Or a public safety issue? Or absentee voting by students who were far from home? We kicked around possible stories but finally settled on how Northeastern students and faculty members were responding to a new United Nations report on climate change.

Our next task was to figure out how to report it. Three of my students volunteered to get reaction from fellow students. They would go out as a team, accompanied by a fourth student who’d take pictures. Other possibilities for interviews were identified: a faculty member who teaches environmental science. A politically conservative professor. A media expert who could speak to why the U.N. report hadn’t seemed to resonate. Two students volunteered to do research, one on press coverage, the other on the science of climate change.

After doing their reporting and research, all the students posted their notes on a Google Doc I had created. Each student wrote her or his own version of the story. I chose what I thought was the best one, supplemented by some material from other stories, and then published the results on our class website.

The upshot: A useful and, I think, fun assignment from which my students learned something about the importance of teamwork in news-gathering. And a reminder for their professor that students often learn more when you help them teach themselves.