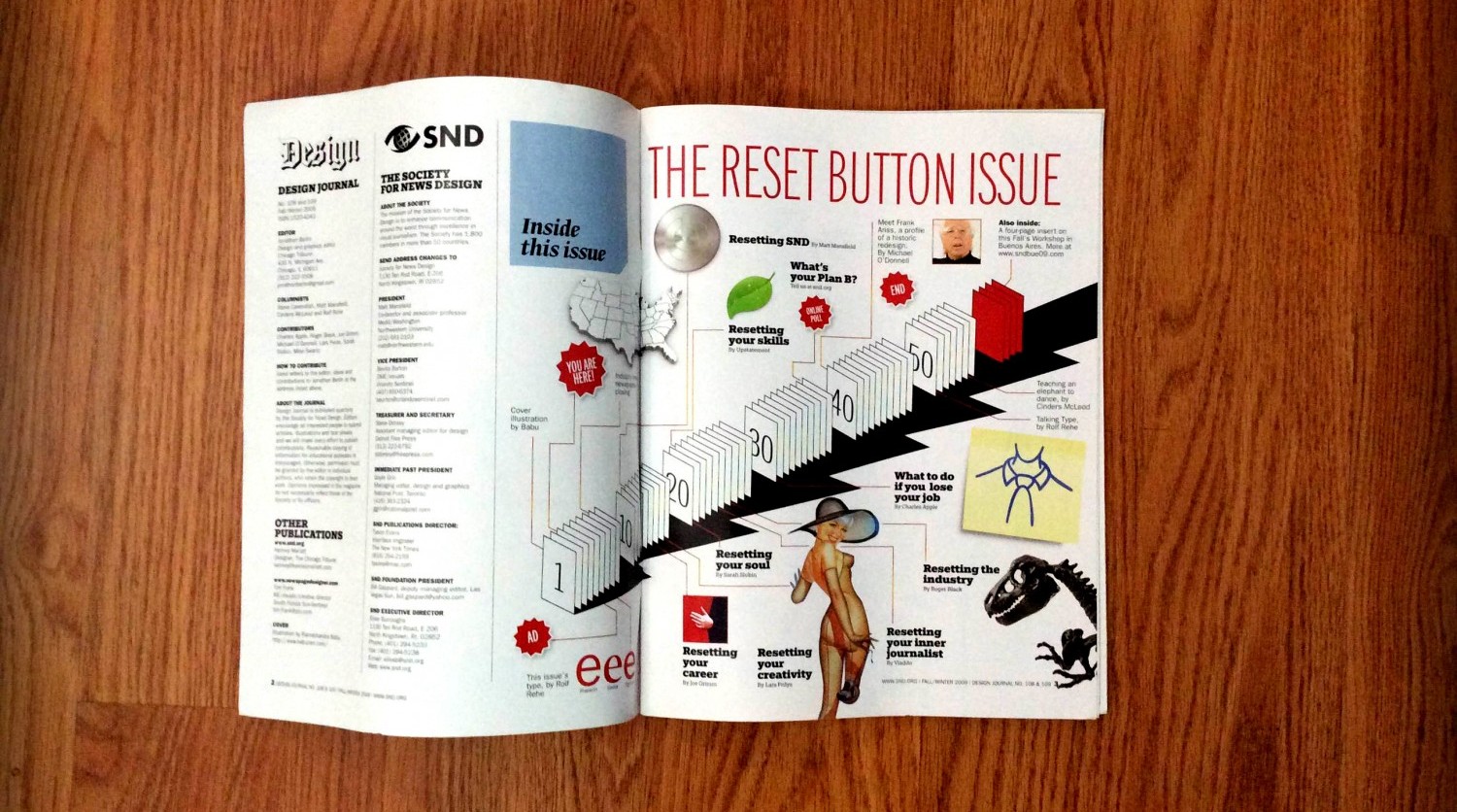 Mike Grant works as a designer and developer at The San Francisco Chronicle. But his road to code was a rocky one. Grant recently wrote about his journey from print designer to web developer on his blog. The following is reprinted with his permission.

It was a strange Labor Day evening — strange because I’ve never taken this holiday to reflect on the fruits of my labor or lack thereof. I found myself thumbing through old magazines I managed to carry along with me on my move to San Francisco seven months ago. In hand was a Society for News Design magazine titled The reset button issue. When the nostalgia of hard times began to set in, I had to check the date it ran: Fall/Winter 2009. Where the hell was I that year?

I’ll tell you. My days were spent working the trade in Los Angeles installing custom hardwood floors and helping to keep my pop’s business afloat. We were getting absolutely hammered by the recession. It was my first year out of news and it was a tough period for me. In fact, it was harder than the backbreaking work I did on floors when a job managed to come through the shop.

By the end of that tumultuous year I was beginning to bring in just enough freelance money to sustain myself and no longer had to be an expense on his books. I kind of understood that I needed to do something else, though I was never pressured to leave. I love my dad for that.

By the grace of God my subscription to SND magazine was still being delivered because I certainly couldn’t afford dues and I was no longer a student. In the issue, Joe Grimm highlighted my plight and that of others in a single graph. Grimm wrote:

“For journalists, our challenge is adapting to an industry that is changing fast — far faster than any of us had expected. While each of us is involved in our own little drama — buyout, layoff, freeze, fear — the dynamics of sliding revenues, evaporating audience and digital challengers are essentially the same. Our responses to challenge will vary according to our situation and what is in us.”

I happened to fall into the “freeze” and “fear” categories after hitting a wall concluding a phenomenal internship in features and graphics at Florida’s Sun-Sentinel. Newsroom recruiter Kathy Pellegrino informed me that Tribune [which owns the Sun-Sentinel] announced a hiring freeze and there was nothing she could do. If anyone would have pushed for me, it was her (and boy do I miss her spirit). [Ed note: Pellegrino passed away in 2012].

The fear set in when I arrived to my last internship that following summer at The Atlanta Journal-Constitution where layoffs were imminent and departments were already being consolidated. I was terrified that no matter how amazing a job I might have done that summer, it wouldn’t move the graphics department back to their own floor, or slow the velocity of a declining newspaper, let alone earn a job.

According to Grimm, I was supposed to “adapt” to an industry I hadn’t quite broken into. How? I guess that was my drama. There I was, a failed byproduct of a shrinking industry — jobless, freelancing and in need of skill but more importantly, work. I was likely too depressed to pay this issue any mind when it was fresh off the press. It was released two years after I interned at the Sun-Sentinel, and it’s now been five years in my possession.

A couple pages in was a large two-page map of the U.S. with dots representing three categories: Time Magazine’s “10 most endangered newspapers”, “U.S. dailies closed since March 2007” and “Papers closed in 2008 and 2009”. The following column by then-SND President Matt Mansfield noted the San Francisco Chronicle was included in the endangered list along with others that could close just as The Rocky Mountain News had.

Knowing The Chronicle never ceased publication brings me peace of mind. Not only are they still around, but I now code for them, and that to me is amazing. How did I get here? How did I become a coder? I guess you can say I found my reset button.

Sure, it was hard work, but the back story is comprised of a bunch of shitty experiences, like the humility it took to go to community college just to learn HTML and CSS on a budget.

A curiosity for WordPress before my instructors had any sense of the platform made me sort of advanced for that time. But I really think belief made all the difference. My belief was in the necessity of acquiring the kinds of skills needed to become a coder no matter how often my job title (or jobs available) would contradict everything I was working toward. I knew I wanted to learn the web machine. [inlinetweet prefix=”” tweeter=”” suffix=”says @mikegrantme”]I knew I wanted to carry my design aesthetic to online storytelling[/inlinetweet]. All the while I didn’t really know what path I was on. And then something happened.

One day towards the end of my year and a half stint at Gannett’s Asbury Park Design Studio, I saw a piece of work [at ESPN] that inspired me. Or better yet, it was confirmation there was room for guys like me. The headline read “The long Strange Ride of Doc Ellis” and I found it a culmination of presentation techniques I often noticed displayed in savvy tech sites. It included parallax, easing, and curtain.js, plus a mix of multimedia assets, illustration, photo and phenomenal design. I knew at that very moment what the next phase of my career would be. The time I took to learn code over the years coupled with the practice I had with clients was all preparation to do this kind of work.

A couple months later, I left my print job to pursue web full-time. I moved home to my parents house with no real job or work lined up. Just pure ambition and hopes that I’d land a gig coding. The search for freelance work began and with not so good results. I admittedly didn’t do well freelancing and learned my own limits on other people’s projects. [inlinetweet prefix=”” tweeter=”” suffix=”says @mikegrantme”]Falling on my ass and failing was part of my process of betterment[/inlinetweet]. I just hated to do it in real-time on other people’s dreams. My apologies didn’t save their projects and my skills had not saved me from feeling terribly inadequate. The skills I knew I had never let me down before, but they certainly did at that time in life. What I can say is that I continued to work through failure even if my clients couldn’t see it.

Taking stock of where I felt were weak areas in my toolbox, I continued to practice and try things. I was using Bootstrap for a side project but couldn’t spend the time I wanted with it because my project wasn’t bringing in any money. I found more online resources than I knew what to do with. My last dollars and cents went to further developing as a coder, with a short-term wish to just focus everything on code.

Then an opportunity came along to try something new at the San Francisco Chronicle. It was a six-month contract position doing web projects. Within months an incubator had been formed and I was placed into this new space with a new team, new desks, new wall paint and an open floor plan. It was pretty much all the motivation I needed to do good work. I poured myself into my craft. [inlinetweet prefix=”” tweeter=”” suffix=”says @mikegrantme”]My ideas about story presentation for web became the work I built[/inlinetweet]. It quickly led to full-time employment just months later. And to think, the place that once made the endangered list was now “incubating” and consistently taking serious strides at online storytelling.

The leap of faith I took from print designer to web designer was all but pretty. There were points when I felt I was falling and failing. But I kept this goal of “coder” close to me through the uncertainty. That’s the thing about the reset button. When you want something bad enough you have to push it. It’s the in-between step when all is bad, you’re fed up, or when it’s time for a change in specialty. Pressing the button is the step between not being able to find a way and making a way.

Grimm spoke a lot about second acts to your drama. If you’re a print designer who’s ready for a “second act” in your career and are really wanting to develop as a coder, then accept the idea that you won’t be good for a long time. Also expect to be challenged. Once you get around that, you’ll just learn and grow. One day you’ll realize you code and hopefully, you’ll also realize you wouldn’t have earned the title had you not hit the reset button.