The toll: Mass shooting data visualizations around the web

President Obama issued a rare challenge to news organizations last week when he responded to last week’s mass shooting in Oregon by asking them to do some data homework: “Tally up the number of Americans who’ve been killed through terrorist attacks over the last decade and the number of Americans who’ve been killed by gun violence and post those side by side on your news reports.”

News outlets including Vox and CNN stepped up to that mission. Poynter has a roundup of those graphics, produced in the hours after the President’s call to action.

But Storybench decided to publish a roundup of visualizations that have gone above and beyond what Obama requested.

Below are several visualizations produced by news organizations and researchers that combine great design and visualization with good old fashioned shoe-leather reporting that bring home the toll of gun violence in America. Update (12/2/15): We’re adding more visualizations on mass shooting as they are published.

A well-done graphic, simple layout, good color scheme, and a devastatingly long scroll to the bottom of the 994 mass shootings the U.S. has seen in the last 1,004 days. 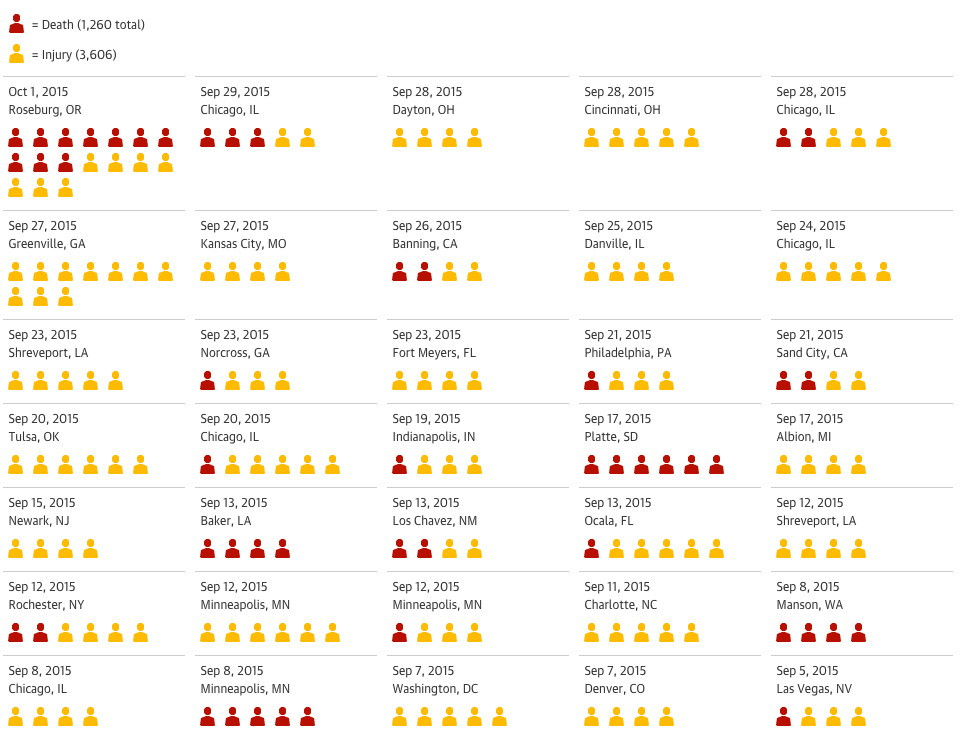 Christopher Ingraham continues to update his calendar visualization with each new shooting. It looks like a macabre game of Minesweeper. Very effective visualization though we don’t see the number of victims. 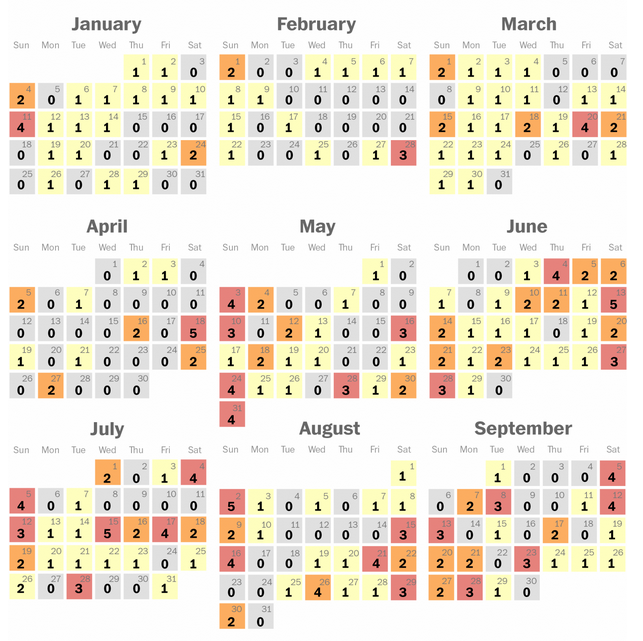 A timeline of U.S. mass killings 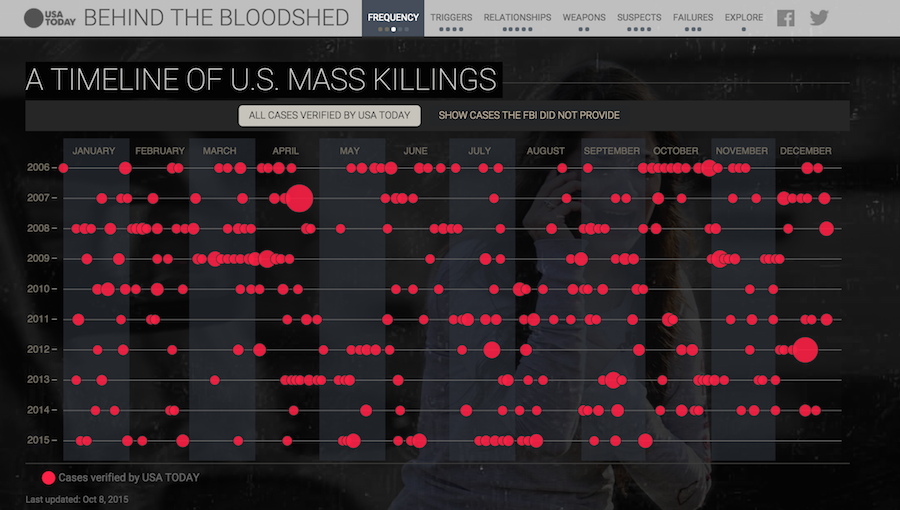 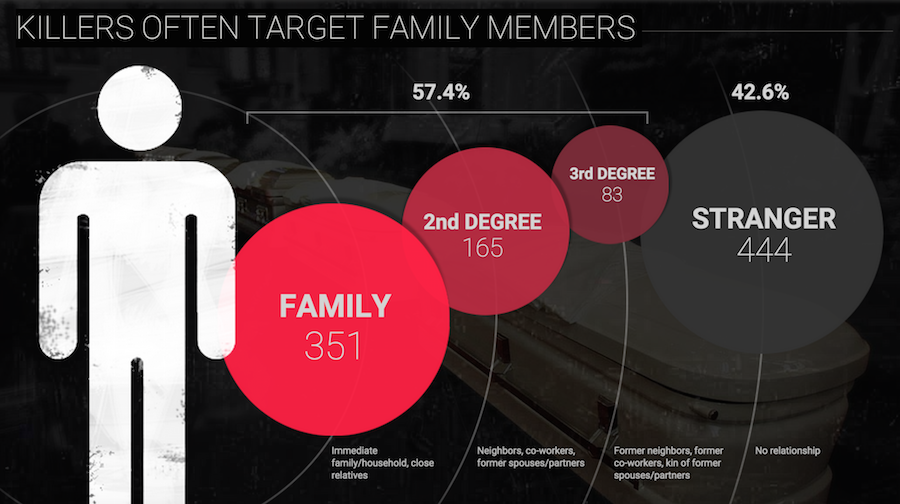 Libby Isenstein breaks down what gun-related legislation looks like in each state. Good data reporting. Clean visualization for the sheer quantity of data being expressed. There is an expanded table showing all 50 states here. 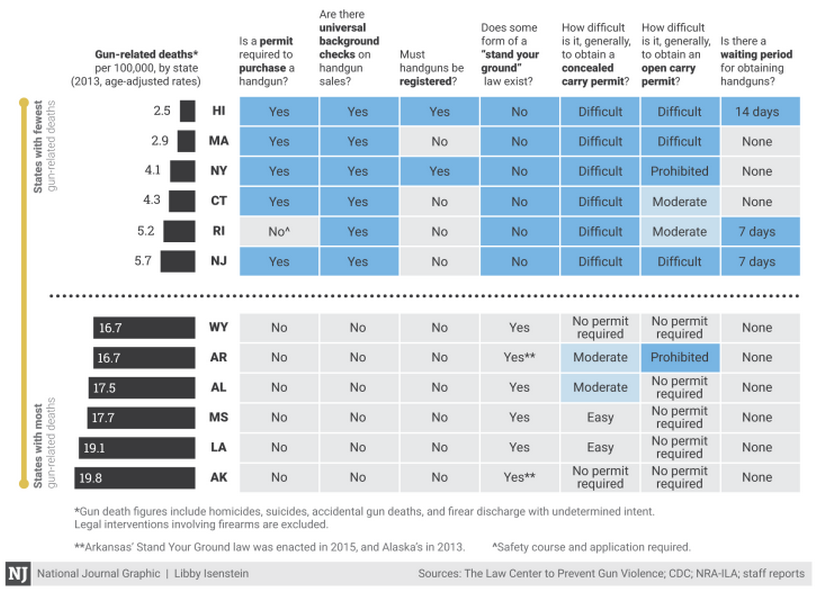 This graphic, updated October 5, 2015, juxtaposes the two kinds of states. Well done, though, obviously, an interactive graphic would allow for more exploration. 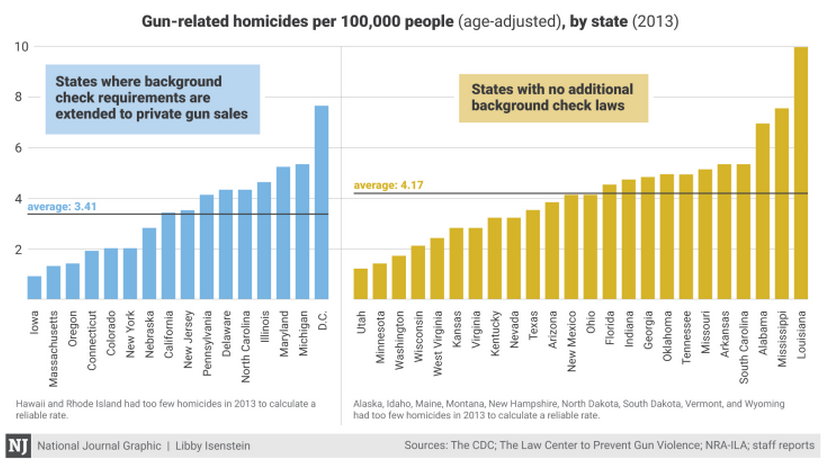 Martin Grandjean is a Swiss researcher in digital humanities looking at history and network analysis. Grandjean visualized data referenced by Nick Kristof in an August 26, 2015 piece for The New York Times and fact-checked by Politifact’s Louis Jacobson. Color scheme could be improved and a Y-axis for time would be helpful. When was the War of 1812, again? Still, nice data-digging and visualizing of a quote taken from The New York Times. 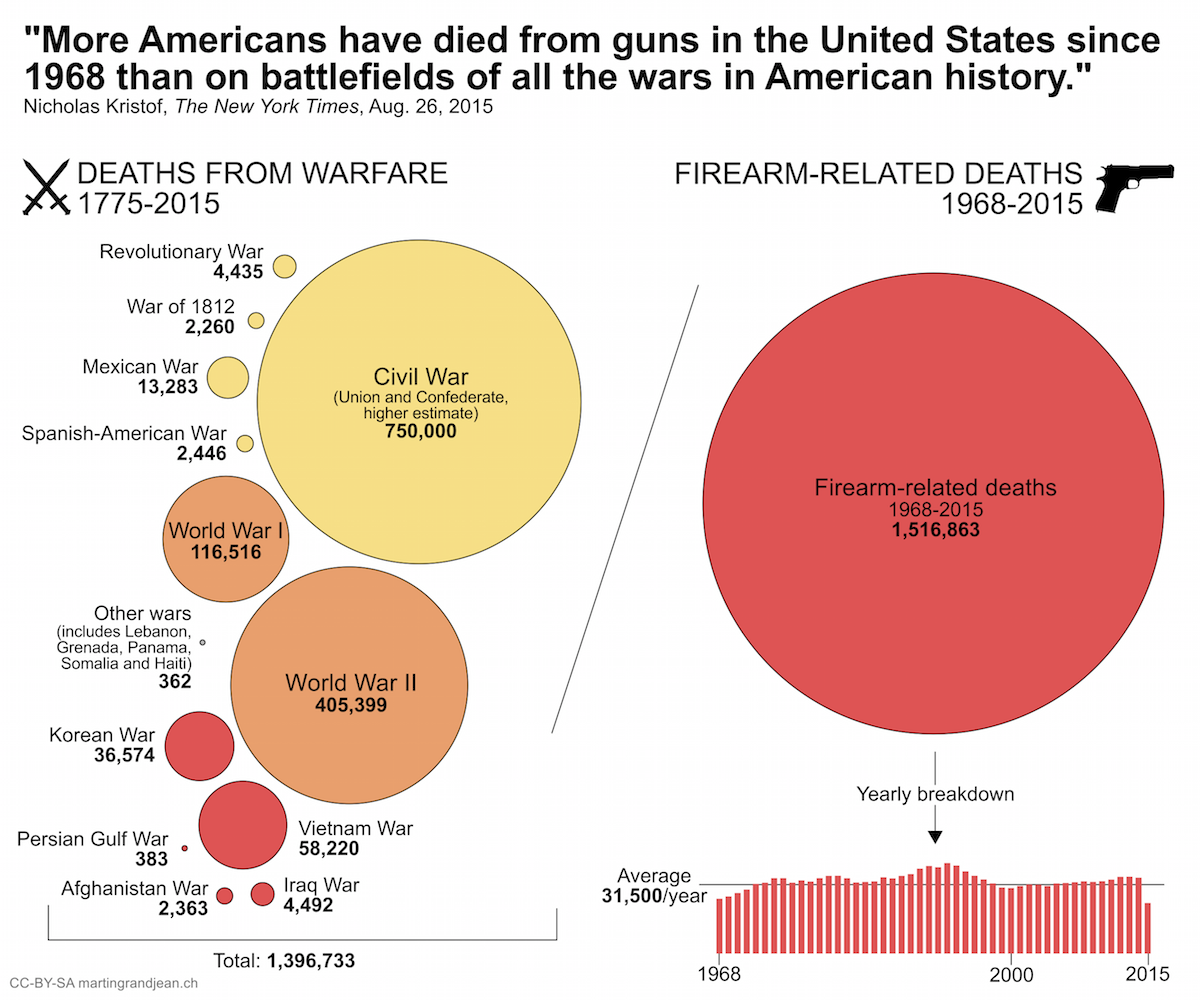 Writing in Mother Jones, Harvard School of Public Health and Northeastern University researchers show that mass shootings have tripled since 2011. They used Mother Jones data and also looked at an FBI study. 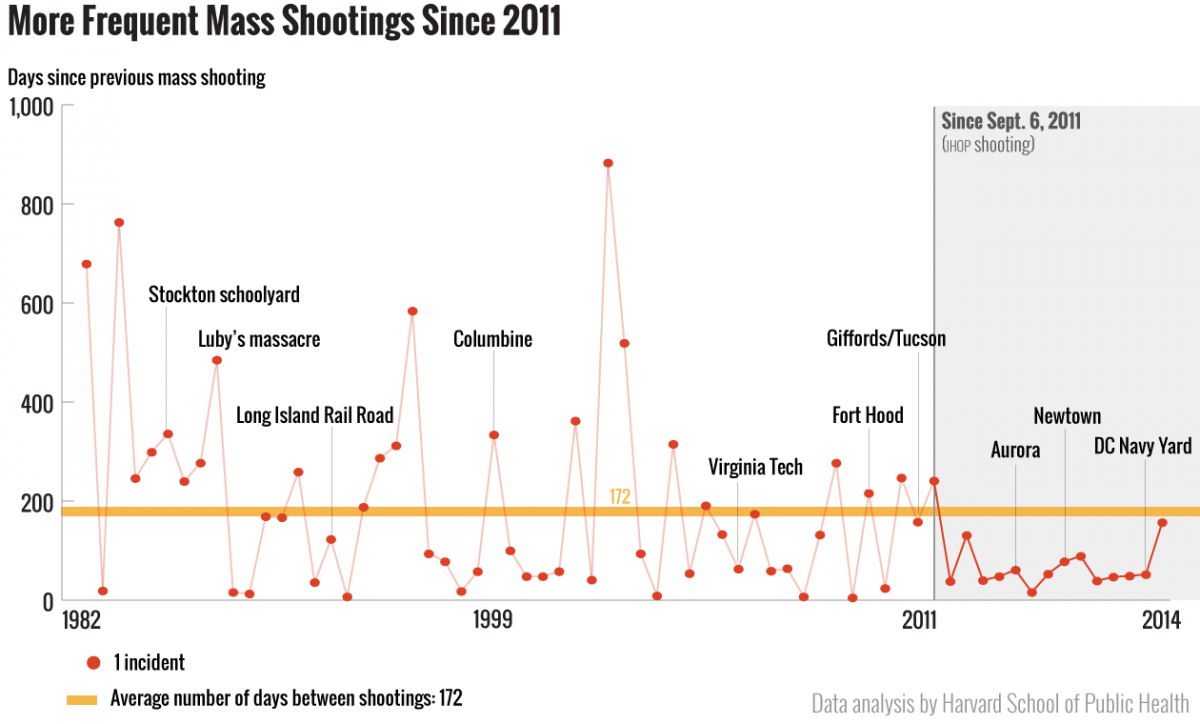 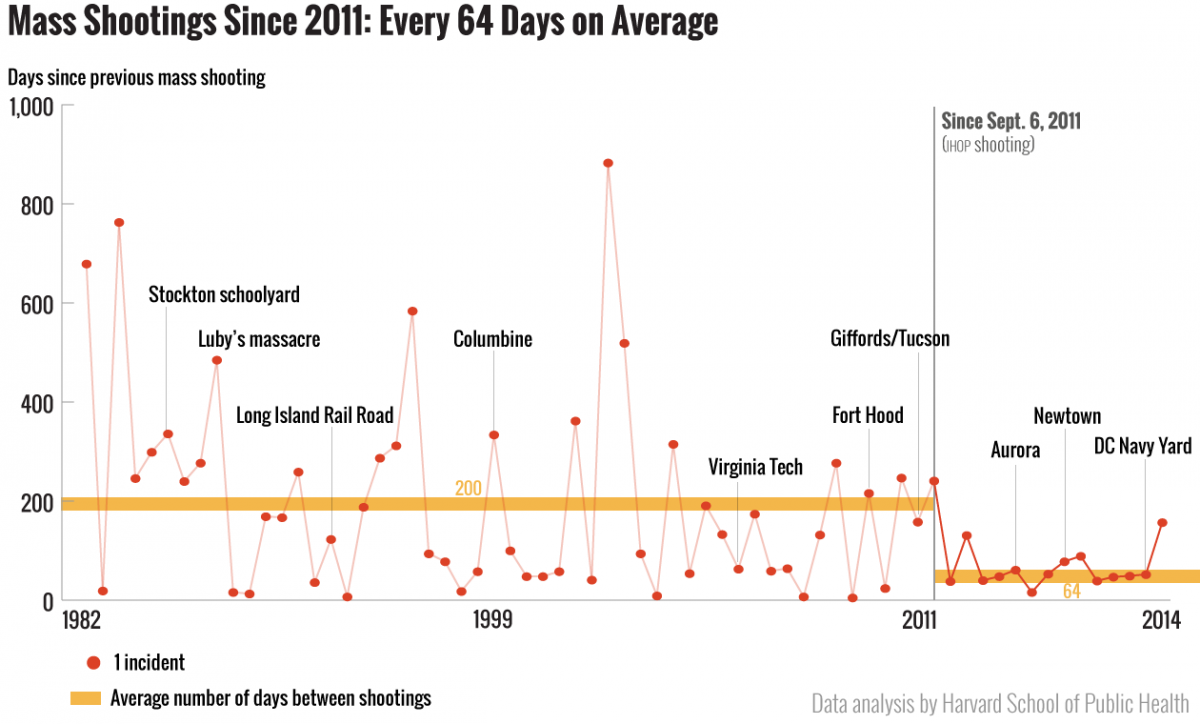 They also produced an image optimized for sharing on social media showing the frequency of mass shootings along a timeline. Powerful though difficult to identify the number of shootings in the clusters.

In U.S., it’s more dangerous to be a little kid than a cop

By publishing directly to Facebook, Al Jazeera Plus catapulted this bold, well designed graphic into the national conversation. In two days, it had more than 2,000 likes (weird) and more than 1,300 shares. 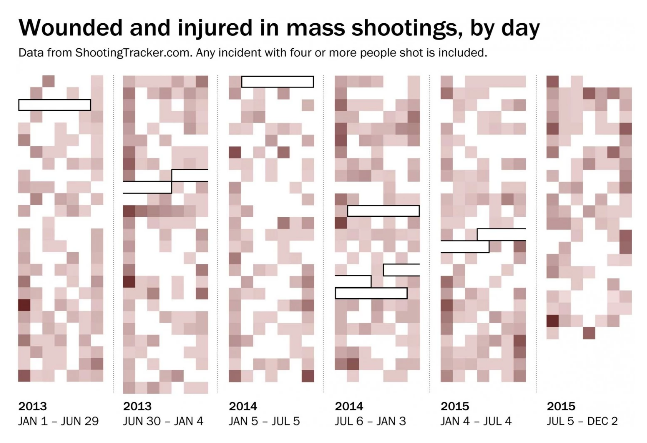