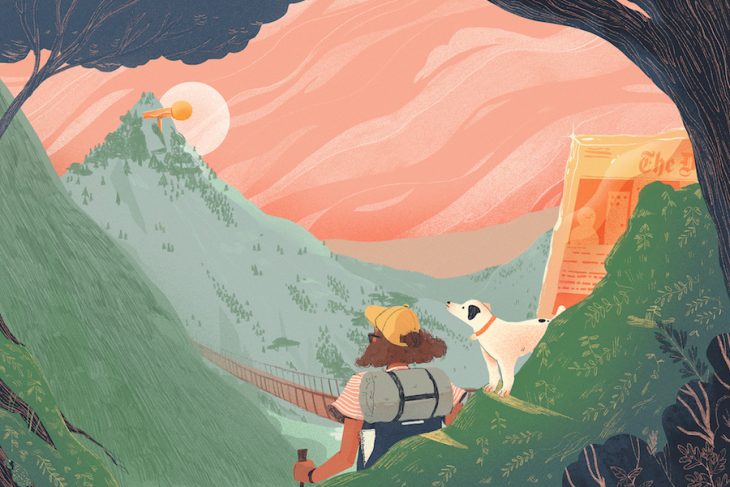 More people are accessing news in audio formats. Between the steady rise in podcast listeners and the extensive reach of radio, demand for audio news is high. And as print journalists begin to explore audio to fill this demand, they are met with a common set of challenges: awkward-sounding delivery, sneaky “mmm-hmm’s” in source quotes and a nagging feeling that there is too much information to fit into too little space.

That’s why NPR’s Alison MacAdam created a guide to help print journalists get started with audio titled “The journey from print to radio storytelling: A guide for navigating a new landscape.”

“Sound redefines the way we report and tell stories,” she writes. The nine-part guide, sprinkled with short sound clips and humorous illustrations, points out fundamental differences between print and audio and presents ways for print journalists to overcome those barriers. Below, some takeaways from the guide.

Keep in mind: audio recordings aren’t just for you

A few of the guide’s sections revolve around the idea that while print journalists are accustomed to recording interviews for their own reference, the interviews they record for radio and podcasts are the content. As a result, journalists must both be careful about the sound their recorders pick up and ensure they get the sound bytes they need. This means reporters must turn verbal affirmations into motion-based ones and keep their lips sealed until their source is done talking.

It also means journalists must actively listen to ensure sources’ quotes are full thoughts and simple enough for the distracted listener to comprehend. Asking questions like “Can you say that in a complete sentence?” must become a part of reporters’ regular interview flow, accompanied by a stronger emphasis on the universal “Explain it to me as if I knew absolutely nothing about this topic.”

And, finally, journalists must take extra time to gather sounds, such as ambient noise collected at the interview location or story setting. Reporters must take uncomfortable pauses in the interview to ensure they record the sounds of the room. “Explain that it will make the radio story better,” MacAdam writes. “Usually, people are intrigued by seeing how the radio sausage gets made.”

Whereas the conventional print or online story packs in as much information as early as possible, the opposite is true for audio stories. When audio stories reach their listeners’ ears, they travel at the same pace regardless of the individual listener’s attention or comprehension speed.

Sentences in audio stories, then, need to be shorter and contain fewer facts so a majority of listeners can absorb them as they come. Sentence structure must be simple. The story itself must stick to a narrow focus, answering only one overarching question as opposed to a print story, which might address several questions under one umbrella.

The habitual inverted pyramid style and comprehensive nut graf of print stories must be broken in audio scripts.

“The inverted pyramid is the death of a radio story,” MacAdam writes. Instead, stories must have a clear narrative arc, raising a question in the beginning that is answered before the end, and oftentimes by a source rather than the reporter. Source quotes in radio are meant to tell most of the story, with the reporter filling in when necessary.

This is also a substantial departure from natural journalistic writing, which includes quotes for color and emotion and primarily depends on the writer’s concise and comprehensive paragraphs to convey the important information.

One of the biggest points MacAdam makes in the piece is to write audio stories the same way you would tell them normally. “Repeat this mantra constantly if you’re writing or editing: If you wouldn’t say it that way, don’t write it that way,” she writes in the guide.

Often, while writing scripts, audio journalists talk to their computer screens to tell the story aloud before they write anything down. This eliminates much of the phrasing that tends to show up in conventional journalistic writing, like calling people “residents” or “individuals.” Said aloud, that kind of phrasing sounds awkward, MacAdam writes.

Finally, what reporters say is altered by how they say it in radio and podcasts, so finding a good tone of voice for audio stories is important for any journalist trying to make the transition.

MacAdam’s written guide outlines simple yet important points, and does so in an easily digestible manner. Following her steps would undoubtedly make a print journalist’s path to audio more straightforward, and could help entire newsrooms form a strategy to build up audio teams, further accommodating their audio-hungry audiences.