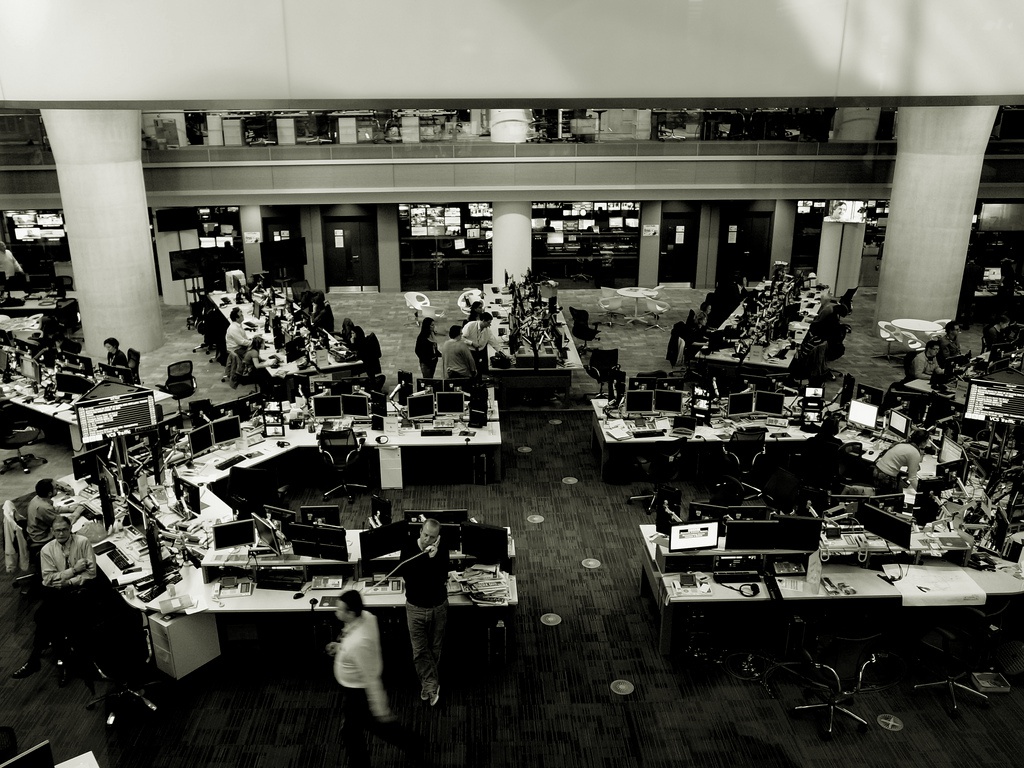 For much of his life, Noah Veltman thought of coding as a hobby. But after five years as a software product manager and web developer at various tech companies, Veltman is part of a news nerd SWAT team at New York City’s primary public radio station, WNYC. He now gets to play around in what he calls a digital sandbox, building interactive maps, news games and Twitter bots for a living.

The job followed a Knight-Mozilla OpenNews fellowship where he first caught the journalism bug and realized how much fun he could have with a newsroom for a sandbox.

“Once I was in a newsroom I was like ‘Oh yes, this is it.’ This is what I was building for fun and now it’s a job,” he told Storybench.

Veltman didn’t study programming or much computer science at all. But growing up in Silicon Valley he was often fiddling with tiny bits of HTML to put together websites. “I used to play with animated gifs, or find out how to play a midi file on your website. I probably had a hit counter on there at one point,” he says. Veltman’s hobby of building “weird Internet things to share with my friends” (games, charts, visuals) was reserved for outside of work hours.

“It was very obvious very quickly that the kind of work I get to do in a newsroom is more stimulating than the work I’ve done at other jobs,” says Veltman.

After completing an OpenNews fellowship at the BBC where he worked on interactive graphics projects that attracted lots of eyeballs, Veltman landed a job on a team of five at WNYC Data News in New York City. (See some of the projects he’s worked on here.)

Veltman recently built a New York City school-name generator that turned a lot of heads (or generated a lot of clicks, we should say), much like John Travoltify your Name at Slate, or the Vice.com headline generator). If you’ve ever read through a roster of NYC school names, you’ll notice a pattern. “You stare enough at those names and you see the formulas emerge and the patterns overlap,” Veltman says.

Want to build a headline generator? Read the StoryBench How To.

We recently gave Veltman a call to ask him to explain his process. Here’s what he had to say.

First, he notes, “you need a way to generate names according to that formula.” Next, do the research to figure out what the patterns are. After that:

• Get a bunch of words and classify them.
• Build an engine to pick words and use a formula to randomize results.
• Reiterate and refine

How long did it take to build?

Less than a week. A day for the formula, a day or two to build the interface. One of the tricky things is the layout. The amount of time that goes into that is actually pretty high.

What are your favorite out-of-the-box tools?

Leaflet for mapping is really outstanding. Something that brings you gently into a more code-centric approach. Quartz’s ChartBuilder for example is good. There are tons of people out there that don’t consider themselves programmers but can produce something that works and that’s fine. Argentina’s La Nacion was using a Visual Basic scraper and an old version of Excel. But it worked! “[inlinetweet prefix=”” tweeter=”” suffix=”says @veltman”]All of interactive journalism is hacked together[/inlinetweet] [stuff]. It’s pointless to play the game of there’s only one true way to play the game.”

“Any piece of code that I write, I go back to it a year later and I’m embarrassed. It’s like a writer,” says Veltman.

Should news developers open-source their code?
Sometimes the newsroom pace is such that it doesn’t justify the work it takes to clean up code enough that it’s usable. There’s nothing we do that we wouldn’t want people to see, but it would be inscrutable to the average person. There’s also a debate about the meaning of open-source, whether it literally means opening your source code or making something available with care and knowing its usable. You don’t want to make it this extra burden.

“Code is more valuable when the producer has taken extra care to package it and it’s code that addresses a need, that’s usable and portable,” says Veltman.

Any tips on how to become a newsroom developer?
People that work here are a self-selected bunch. You need a very particular blend of stuff: [You must be] sort of a technologist, and sort of a journalist. You have to have a certain attitude and a certain mindset that people might think is common but is pretty rare. There are places like Northwestern where students are coming out with much more of an idea of what they want to do; definitely more ideas and skills than I had at that age. My skills came with time. Though you may be constantly brimming with ideas, sometimes it takes a couple years.
Noah Veltman’s tips on how to talk to a newsroom developer can be found on his blog.