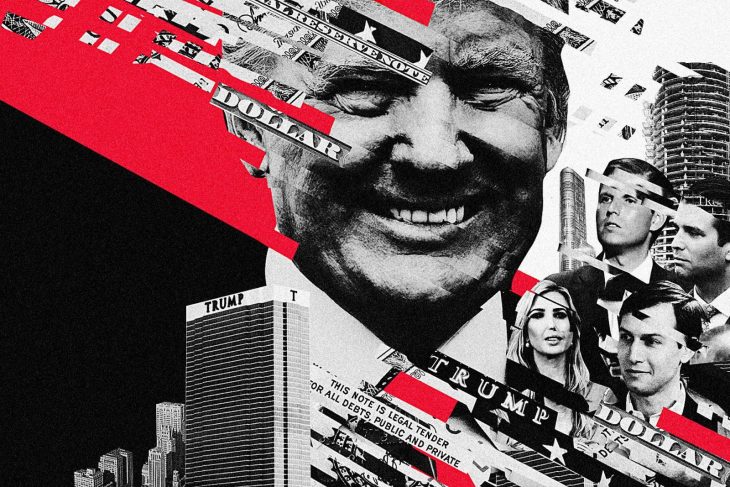 Andrea Bernstein recalls the brainstorming session that took place between ProPublica and WNYC, where she works as a senior editor for politics and policy, to try and decide how the two news organizations would go about investigating the businesses of president Donald Trump. On a whiteboard in a conference room, they scribbled ideas for potential stories, but couldn’t pinpoint one specific topic that would spearhead the joint investigation.

But then it hit everyone that Trump’s business dealings as a whole was the story that needed to be dug into deeper. That’s how “Trump, Inc.,” an investigative podcast into the various businesses of the president his sons and his son-in-law, was born.

“The mysteries around [Trump’s businesses] were the story and that was the point at which we really started talking about doing the Trump, Inc. podcast,” said Bernstein. “We wanted to create a central landing place, not only for our own work, but to gather together the best investigative journalism that was being done about this and citizen journalism.”

The relationship between WNYC and ProPublica stemmed from a prior project called “Trump SoHo” that was produced with The New Yorker in the fall of 2017. That story was a 17-minute radio piece that detailed how Ivanka and Donald Trump, Jr. avoided criminal indictments for misleading potential Trump SoHo property buyers. Realizing there was more to Trump and his businesses, the reporters wanted to return to the topic.

Rather than go back to one, long radio story, WNYC and ProPublica decided to go the podcast route – a medium that would allow them to pace their investigation and present their findings across multiple episodes.

Perfect for the space and pace investigative reporting requires

It’s not news that podcasting has become popular among media outlets. Rather than producing several-thousand-word investigations that might turn away readers, or running a series of stories on television over the course of a few days or newscasts, podcasts allow the listener to control the pace with which they take in the information. And, as Slate’s “Trumpcast,” PRX’s “What Trump Can Teach Us About Con Law,” and The Washington Post’s “Can He Do That?” have shown, the president’s transgressions lend themselves to episodic audio storytelling. Investigative podcasts, though, are becoming more and more common, taking listeners on a journey that doesn’t end after one episode.

The minds behind “Trump, Inc.” consider it an “open investigation” with no real end in sight. So far, 12 episodes have been released, covering topics like Trump’s expensive inauguration, his illegal business dealings in India, the Trump Taj Mahal in Atlantic City, and questionable business operations with son-in-law Jared Kushner and his family.

Trump, Inc. is far from the first to use podcasting for investigative reporting. The Center for Investigative Reporting and PRX teamed up years ago to release “Reveal,” a podcast that spends every episode going deep into a topic and investigating them across the U.S. Recently, “Reveal” partnered with KALW in San Francisco to produce a four-part series on lead poisoning in the Bay Area. Its latest episode, “Trumping Hate,” explores “the president’s role in hundreds of hate incidents across the country, with help from the Documenting Hate project led by ProPublica.”

But then there are podcast series that are still considered investigative reporting but are told in a way that injects more horror and intrigue for listeners. In short, the “true crime” category. Popular podcasts like “Serial,” which captivated the nation in 2014 and 2015 and was downloaded over 250 million times, and “S-Town,” from some of the same producers, fall into this category. Gimlet’s “Crimetown” and APM Reports’s “In the Dark” are two others well worth listening to. They’re real stories where the host takes listeners on an investigative journey, looking into a crime that occurred – years or decades ago. Many times listeners are left to decide for themselves whodunnit.

Even local TV news is getting into investigative reporting podcasts

One local television news station that has gotten into the podcast game is WDIV in Detroit. Led by sports and special projects producer Jeremy Alan, WDIV decided to tackle the unsolved disappearance of three local boys in a 12-episode podcast called “Shattered: Black Friday.” The story had already been covered for television when the Skelton boys – Alexander, Andrew and Tanner – went missing in 2010. But Alan decided to reinvestigate the boys’ disappearance in podcast form, giving it more time and presenting it in a form that would make it more accessible for anyone to listen to on their own time.

“I wanted to make sure that it was known that I wanted to do more in the digital realm… and I think podcasts are an extension of that,” Alan recently told Storybench. “When you’re in the car, or in transit, walking wherever you are, many of us are listening to podcasts.”

Nowadays, almost every major media outlet is producing some sort of podcast. If you’re one that isn’t at least experiencing in the medium, then you’re missing out on reaching an entire segment of people.

Coining productions like “Trump, Inc.” and “Shattered: Black Friday” as “open investigations” allows ProPublica, WNYC and WDIV to come back to these stories in the future. Instead of ending after one season, making these podcasts open-ended leaves the option free for producers to create second seasons or, if new developments occur, release updates that listeners can take in on their own time, rather than penning another text story or producing an update for television that might not get the proper time or length to do the story – or victims – justice.

[perfectpullquote align=”right” cite=”” link=”” color=”” class=”” size=””]“There is a real appetite for investigating stories told like this in audio.”[/perfectpullquote]

WNYC’s Bernstein said she’s received positive feedback for “Trump, Inc.,” both from people simply voicing their pleasure in the podcast and from others who send in tips. Because of that, she believes WNYC and ProPublica will continue to use podcasts to do investigative work. She feels confident that this will become a popular platform that other media outlets should consider.

“People love this kind of storytelling and people really like the open investigation,” Bernstein said. “There is a real appetite for investigating stories told like this in audio.”

“What podcasting does is it gives you a chance to tell these stories the way they deserve to be told,” she said.

Patrick Strohecker
Patrick is a graduate student at Northeastern’s School of Journalism.