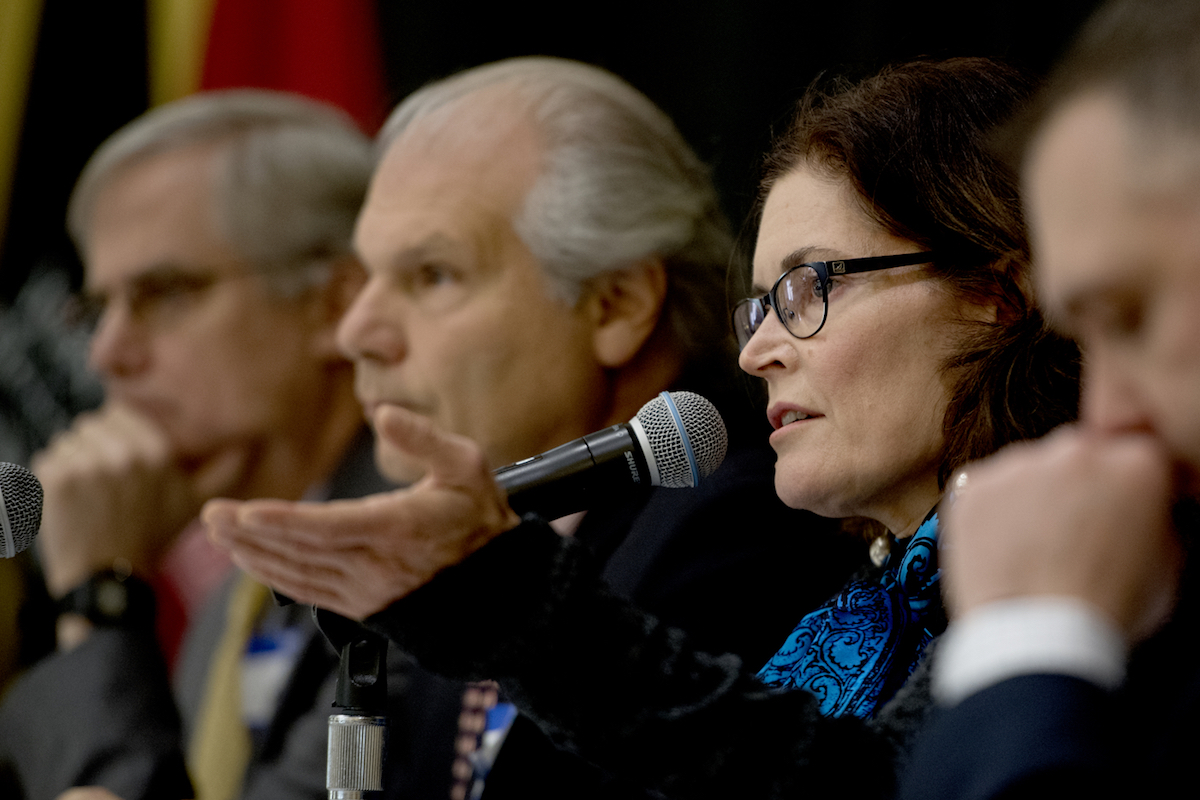 Last Friday, Northeastern University’s School of Journalism invited an all-star roster of journalists and editors to discuss investigative reporting in the Age of Trump. Entitled “Is Trump Making Investigative Reporting Great Again?,” the event featured two panels – “Is there a market for investigative reporting?” and “Tips, techniques and tales from investigative reporters” – comprising journalists from across New England, followed by a keynote discussion from ProPublica’s Louise Kiernan and Eric Umansky. Below, some takeaways from the conference.

Is there a market for investigative reporting?

The answer from almost every panelist was a resounding yes, if with some caveats. “We are hearing from everyone that people want investigative reporting,” said WBUR’s Melville. “I think there’s a general sense that there are big, powerful forces at play that need to be watched.”

“For us at NECIR, the question of is there a market for our work is essential,” said Glass. “I think one big question is that the public actually has different definitions of what constitutes investigative reporting.”

WGBH’s Redo made the case for agility in a news business that, in the face of fake news and dwindling attention spans, is getting faster paced. “People do want the truth,” said Redo. “What they want is to understand that what they think is the truth today might not be the truth tomorrow. With the world changing, do you need to engage them differently?”

Which is why WCVB’s Hurlburt stressed the importance of showing audiences just how investigative reporting is done. “We do a lot of process reporting,” he said. “We show people what we are doing.”

"It's very important to fight for the time — fight for the space — to get a story out there," says @dhurlburt of @WCVB. #digiNU pic.twitter.com/VRArsGY4vE

"Source transparency, clear language & explaining how stories are reported" are key in "an age of 'fake news,'" says @TomMelville #digiNU

Tips, techniques and tales from the boots on the ground

Morisy kicked off the panel discussion by noting that Donald Trump had helped make public records requests “cool again.” He then proceeded with a list of tips for filing FOIA requests, including “inviting the audience in,” once you have documents. That, after all, is the mission of MuckRock, which serves as a one-stop-shop database and community gathering place for requesting, publishing and sharing public records. Morisy made the case for investing time and energy in records requests – not only can they help build a story, they are integral to investigative journalism.

NHPR’s Casey McDermott started on an inspirational note. “I am 26 years old,” she told a room full of students. “You don’t have to be far into your career to do meaningful, substantive coverage of policies and politics.” In New Hampshire, McDermott had found a niche that needed shoe-leather reporting. She advised students to find one, too.

When the conversation turned to audience engagement, McDermott mentioned Hearken, a tool her newsroom has successfully used to “ask questions of the audience,” she said. “Those stories have been some of the most read over the last year.”

When it came his turn, Globe reporter Mike Rezendes shared more than a dozen tips for investigative reporting: 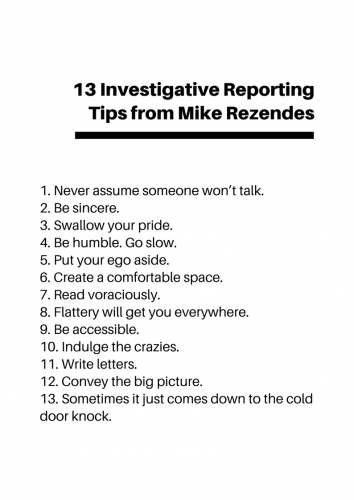 Rezendes was quick with a story to illustrate each of his points, one of which News@Northeastern reporter and journalism graduate student Molly Callahan captured:

Describing a scene in the movie Spotlight wherein he received “the tip of a lifetime” from attorney Mitchell Garabedian outside the Springfield Superior Courthouse, Rezendes said, “I had made myself a fixture in Mitch’s office for about six weeks before he gave up the goods.

“We’re living in this incredible era of data and information,” he said, “but people can neglect the art of cultivating and nurturing sources, which is critical to tell you where those data are.”

STAT News‘ David Armstrong echoed Rezendes’ tips. “You just gently put your foot inside the door so they can’t close it,” he said. “Being there in person brings you things that you never imagined to consider.” But, Armstrong pointed out, putting in the work is what gets you the story. He fears too many journalists think the story will come to them.

“One of the things that I worry about with investigative reporting today is the notion that people can do incredible investigative work without getting out of their pajamas and sitting in front of the TV all day,” Armstrong lamented. “It’s important to keep in mind that a lot of the best stuff is not online.”

To close out the conference, School of Journalism director Jonathan Kaufman sat down with ProPublica’s Kiernan and Umansky to discuss national- and local-level investigative reporting. Umansky started on an up-beat note before pointing out the reason ProPublica decided about a year ago to open up an Illinois bureau.

“National level investigative journalism has done pretty well. You have Buzzfeed, The Huffington Post…” he said. “But where you’ve seen a tremendous deficit is on the local level.”

Which is why ProPublica was founded in 2007 and why, a decade later, the Illinois bureau was started. The mission, which Umansky summed up as doing “stories of moral force that can effect change,” has tried to address that shortage at the local level, publishing “revelatory stories about injustices.” Another way the organization has addressed the problems facing journalism, Kiernan said, is ProPublica’s willingness to challenge journalism’s mold.

“Part of what I find so exciting about our mission at ProPublica is we look at investigative journalism very differently,” said Kiernan, who left a teaching job at Northwestern to head up ProPublica Illinois. Collaboration is key to ProPublica’s secret sauce, Kiernan pointed out, be that with other newsrooms or with the audience. Being transparent is a way to educate the audience on how journalism is done, she said, and that can only help in an age of fake news.

"Open up the process so people can understand how journalism works," says @louisekiernan at @NUjournalism. "When they see what you do and how you do it, it's easier to fight back against those claims of [fake news]." pic.twitter.com/F7Lgs41bZY

Finally, Kiernan and Umansky shared tips for students trying to break into journalism. Kiernan said she looks for strong interviewing and writing skills. “How to ask questions,” she said, “and how to really listen to answers.” Umansky, for his part, stressed the need for data literacy. “Take a basic stats course,” he advised. “It helps you to call bullshit on numbers when people throw them out.”

That’s exactly what ProPublica did when former White House press secretary Sean Spicer called the organization a “left-wing blog” for reporting on Donald Trump’s ability to “pull money from his businesses anytime he wants.”

“One thing we can do is say that the story speaks for itself,” explained Umansky. “We didn’t do that. What we did was write a tweetstorm that called out Sean Spicer on his bullshit.”