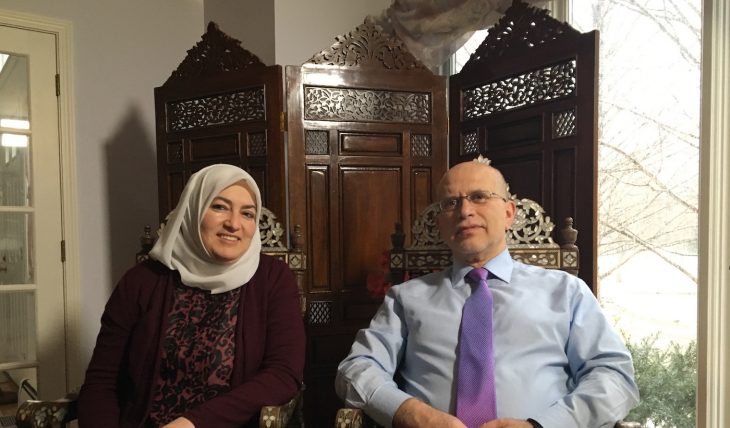 As Omar Duwaji blew out the signature pink, green, yellow and blue candles on a store-bought birthday cake, he was nearly moved to tears. The cake was a surprise from the Abdos — a family of Syrian refugees who had resettled in Massachusetts and whose story he was in the midst of documenting.

Duwaji’s camera team recorded the humble ceremony and included it in a seven-minute video about the family’s journey to the United States. The mini-documentary was one in a three-part series that Duwaji produced about the history of Syrians in America. Duwaji and his team created the series for AJ+, where Duwaji has worked as a producer for the past three years and as an intern for two years prior to that. Based in the Bay Area, he works to uncover untold stories around the United States.

The “Syrians in America” series, which ran in March 2017, focused on three historical waves of Syrian immigration to America – and particularly to Massachusetts. In 2016, when the Abdo family moved to Lowell, Massachusetts, they were but a handful of the 12,000 refugees from Syria relocated to the United States.

“Their story is so sad. When you hear everything that they’ve gone through it’s really hard not to be affected by it,” Duwaji says. “What amazed me is really just their resilience and how hard they were working and how hard they were studying and how their parents were doing literally everything they could to to make sure that their new home was going to be perfect for the kids.”

The first video in the series discussed the generation of Syrians who emigrated to the United States in the late 1800s — when Syria was much larger, considered to encompass much of present-day Syria, Israel, Palestine, Lebanon and Jordan — searching for work and escaping war and political prosecution by the Ottoman empire. The second video covered the wave of Syrians who began to arrive after Congress passed the Immigration and Naturalization Act of 1965, encouraging skilled workers to come to the United States by abolishing nationality quotas. The Abdos are part of the third wave.

Duwaji’s parents were part of this second wave, immigrating in the 1980s so that Omar’s father, Mazen, could train to become a doctor. Duwaji interviewed his parents about their immigration story for the video series, which he says was a challenge in and of itself.

“When I was pitching it, I basically told my boss jokingly that, ‘Oh, we can interview my family,’ and she was like, ‘That’s exactly what you have to do.’ And I was like ‘No I really don’t want to do that,’” he says, through nervous laughter. “Being a journalist is one thing, but being a journalist and having to interview your own family, that’s another ballgame.”

Getting his parents to open up to him was difficult, and Duwaji says he really had to exercise his journalistic experience and ask them the same questions in different ways to see if they would expand on their answers.

“It was emotional for me because it was the story of my parents, but it’s also my story and how I got here,” Duwaji says. “In the piece you see us — you see me visiting my dad at work, at the hospital, and then you also you see me talking to my mom at home and cooking with her in our kitchen. I just wanted to show that Syrians are just like everybody else, and we’re trying to make it in this country just like everybody else.”

Rooting the series in the current political context

This emotional video series is especially important now because of the severe discrimination Syrians face, particularly those coming to the United States as refugees fleeing war and seeking opportunities to live and thrive,says Duwaji.

“I was really sick and tired of Syrians being otherized and discriminated against, literally called the worst things in the dictionary,” Duwaji says. “As someone who is of Syrian descent myself, I just felt the need to really do something. To just play a small part in raising awareness and trying to help people understand that Syrians have been in this country for a very long time, going back to the 1870s. They are very much the fabric of this country.”

Duwaji was involved in nearly every facet of telling this story. He did the initial research, pitched the story, found the interview subjects, coordinated logistics, wrote the scripts that he reads in the piece and worked with animators and video editors. From start to finish, the 18:28 minute-long series took five weeks to complete.

The series ended up winning an award from the Northern California Society of Professional Journalists for video features and longform storytelling. Duwaji was blown away. “My first reaction was ‘What’s an SPJ?’ I had no idea,” Duwaji laughs. “I’m just — I’m really proud of our team because so many people worked on this, and really put their heart into it and made me look a lot better than I actually seem in person.”

Duwaji’s other projects for AJ+ have included a piece on the decline of coal mining jobs in Appalachia and another on race and segregation in Chicago.

“I want to continue to do this sort of work,” he says. “I think this is sort of a long path to making feature-length documentaries eventually, and that’s where I’d really like to be down the road.”

“Don’t leave without the skills”

Duwaji says the most important journalistic skills he picked up at Northeastern were researching, writing and communication, which he says are invaluable, fundamental skills that allow journalists to do their jobs regardless of platform. In terms of digital media skills, he emphasized that journalists will need to know how to do everything.

“Don’t leave Northeastern without having accumulated all the skills, because the way this industry is headed, you literally have to do everything from researching all the way down to editing, animating and then even social media publishing,” Duwaji warns. “The people that get ahead are those with the most skills.”

Being fluent in Arabic and understanding different dialects also made Duwaji stand out on job applications which — paired with his in-depth knowledge of the Middle East and its cultures — he thinks helped kick off his career. His college graduation coincided with the Arab Spring, so he says there was a great need among publications for people with his skills and knowledge.

“All this was very, very important and really key to ensuring that newsrooms were delivering accurate information and analysis to viewers here in the United States,” Duwaji says. “There was a real need, and I guess I was lucky to have those skills … it’s always a mix of hard work and a little bit or a lot of luck.”