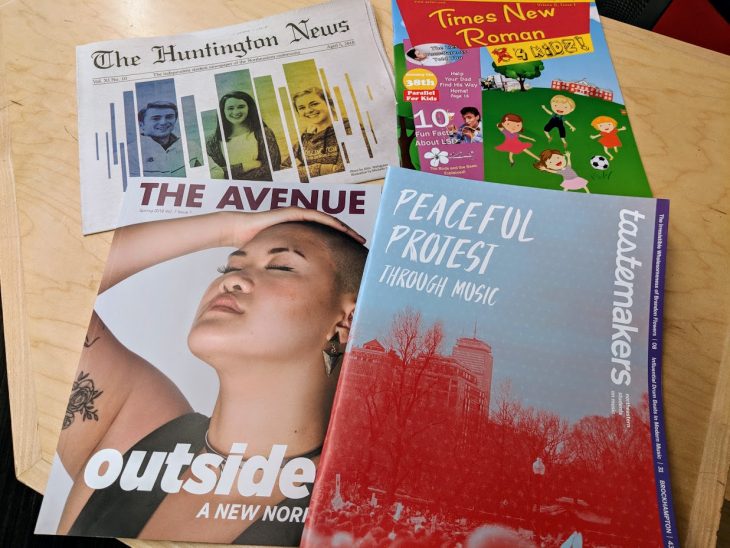 Email newsletters have been declared everything from dead, to not dead, to the future of online media over the past few years. Nevertheless, it seems that many media publications are banking on newsletters as a significant source of traffic and platform to cultivate reader loyalty.

Some of Northeastern’s campus media organizations are revisiting or testing out this communication platform — so even publications whose main audience demographic is known for its social media obsession see newsletters as a viable way to reach students.

Such is the case for The Huntington News, the Northeastern’s independent student-run campus newspaper. Its weekly newsletter used to go out Thursday mornings, when the print edition is published every other week and much of the social media content is posted. Starting this year, it has now been sent on Sundays to have a separate push of stories, explained Olivia Arnold, the social media manager of the News who previously served as editor-in-chief.

She has also tweaked the newsletter to make it more engaging by choosing highlighting certain stories rather than listing every new article from that week.

“It used to be grouped by section and each new story that was in each section of the paper, which is campus, sports, opinion, lifestyle, city. This time around, I tried to do it more based on topics, so it was a little bit more uniform and grouped by people’s interests,” Arnold said. “It’s really more focused on stuff that we want to highlight, or things that we think are especially breaking or relevant to the community.”

Arnold is a dedicated reader of the New York Times morning and evening briefings, two of over 50 newsletters the newspaper offers. She relies on the daily emails to synthesize the quickly changing news, particularly in national politics.

“With the Huntington News newsletter, I think that can be a similar tool for people who are part of the Northeastern community – students and staff and faculty – to catch up on what’s happened in the past week before they prepare for a new week on Sunday morning,” she said.

Other student media organization are also experimenting with newsletters that could interest an audience outside internal members.

“My purpose in doing it was to facilitate information across all three departments, because if you’re entertainment, you mostly just see entertainment people, you don’t really see other departments,” she said, though widening the newsletter’s audience is one of her goals. “I would love for just viewers or people who are interested to sign up.”

Not all Northeastern student publications see the need to leverage a newsletter to reach their audiences. Music magazine Tastemakers focuses on sharing its coverage on social media, as well as putting on campus outreach events, such as during freshmen orientation and their bi-annual concert series.

Tastemakers publishes four print magazines per year, which also point back to their website and social pages.

“Keeping a newsletter consistent to only target current students, not just restate old material to our loyal audience, and somehow use that to generate a new or growing audience just doesn’t fit us right now,” explained McCarthy.

As publishers from college newspapers to international outlets scramble to find sustainable revenue streams in a digital world, Arnold said one caveat she has with newsletters is the difficulty in using them to make money.

“I know The New York Times has started doing advertising in its briefings, and I think that’s something that Huntington News could explore in the future,” she said. As the campus’s only independent publication, they may find more pressure to monetize their newsletter than any other campus media.

Newsletters also provide editors with a window into reader habits. Something newsletters lend themselves easily to is generating metrics. Even free accounts from newsletter building tools, such as MailChimp, allow publishers to track all types of engagement.

“You can see how many people opened it, and who clicked on the links from that,” Arnold said. “So it is a really great source of both giving readers what they need, and also on the back-end, being the social media person, being able to track the kind of reach that your stories are having.”

Arnold learned many of these tools that she uses as social media manager, including MailChimp and traffic tracker SimilarWeb, in Digital Storytelling, a required class for journalism majors. But she wishes some of the journalism curriculum teaches students more complicated tools, such as using Google Analytics.

“It also would be great to kind of learn some more tools for how to not just track but increase engagement, because that is something that we still struggle with,” she said. “We do different sorts of strategies. But really we’re just kind of throwing strategies at the wall, we’re just brainstorming in staff sessions and Googling and finding what works for other people.”