A recent Gallup poll reaffirmed what we already know-the public’s trust in the media keeps sinking.

So what’s a committed reporter to do?

One answer is to take advantage of the Freedom of Information Act, or FOIA, to request public records to bolster one’s story. Agencies at the local, state and federal level produce thousands of records every day, most of which are never reported on but which often have stories of their own to tell.

But the systems in place to submit, process and fulfill those requests can be painfully antiquated and decentralized.

Luckily in the last few years a number of online tools have emerged to further digitize and streamline the open records process including iFOIA.org from the Reporters Committee for Freedom of the Press, Vanderbilt University’s First Amendment Center, and Citizen.org.

Here we’ll focus on one company, MuckRock, and the public records tools and community it provides. (Disclosure: The author used to be employed by MuckRock.)

This week MuckRock released an installment of its project on the U.S. prison system, a look at the solitary confinement policies of six New England States.

With some rare luck, a public records request can even land one’s reporting on a place like The Daily Show, as this request for CIA cafeteria complaints did in a bit featuring Jerry Seinfeld dubbed “Zero Dark Foodie“.

Piggybacking off other FOIA requests

Located within the offices of The Boston Globe, MuckRock defines itself as a “collaborative news site that gives you the tools to keep our government transparent and accountable.” Site lurkers can browse the company’s 12,000 plus user submitted requests, peruse a growing database of 4,850 agencies, read document-based reporting from the MuckRock team, and pick up freedom of information tips from the Q&A Forum.

Filing requests through MuckRock starts at $20 for four requests. The service allows users to submit to any of the agencies in the existing database or add their own agency. Once submitted, MuckRock tracks, follows up and provides status updates for each request. It also handles any postal mail or faxing which a surprising number of agencies still require. 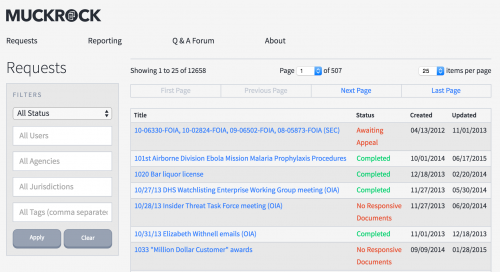 In the event that a response comes back in paper format, MuckRock scans the document into a searchable PDF and uploads on the user’s behalf. It also makes viewing, embedding and downloading your documents easy, right from the site.

Below is an example of a completed FOIA request to the Connecticut Military Department, which serves as a liaison between the U.S. military and the state, for a its memorandum of understanding with the Defense Logistics Agency, a Department of Defense agency that supplies the military:

George Levines is a freelance reporter who has written for the Boston Globe, Beta Boston and Boston Magazine. 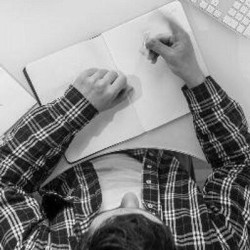 George Levines
George Levines is a freelance reporter who has written for the Boston Globe, Beta Boston and Boston Magazine. He tweets at @rhymeswthgeorge.