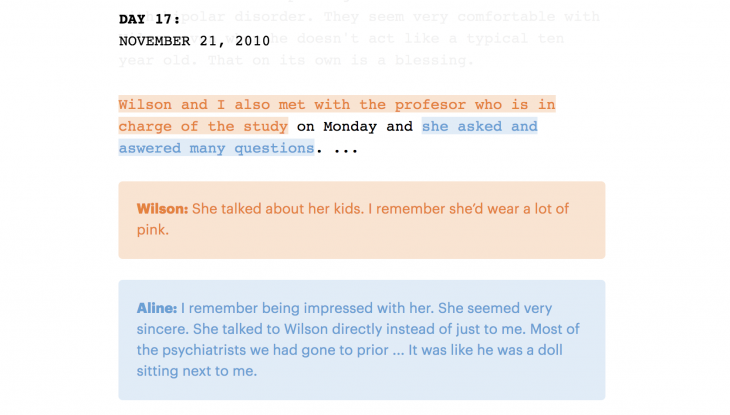 In April, ProPublica Illinois reported a story about a child psychiatrist at the University of Illinois-Chicago named Mani Pavuluri who violated research rules during a clinical trial studying the effect of lithium on children with bipolar disorder. Pavuluri had tested the drug on children younger than 13 years old, violating the approved protocols of the study. She also did not fully inform parents of the study’s risks and attempted to cover up her wrongdoing with falsified data, ProPublica showed.

One of the children involved in the study was Wilson, now 18, who has struggled with bipolar disorder from a young age. A second piece by ProPublica, published last October, illustrates the effect the study had on Wilson and his family. It intersperses sections reported by Jodi S. Cohen and Logan Jaffe with blog posts written almost a decade ago by Wilson’s mother, Aline. The blog posts are accentuated with modern-day comments from Aline and Wilson, displayed in colorful boxes in the margins of the page.

Storybench spoke with Cohen, Jaffe and Rob Weychert, the editorial experience designer who worked on the piece.

How did you meet Aline?

Jodi Cohen: She reached out first by email a week after the first story was published in April saying her son had participated in of Dr. Pavuluri’s studies and that she would be willing to share her story and that she had journal of his experience.

Is it typical to have a source like Aline open up to you the way she did?

Logan Jaffe: It’s atypical in the sense of how closely we worked with her in this case. When Jodi published the first story we put out a call for families who participated in the study to get in touch with us. We weren’t quite sure how the participants were affected by it. By inviting people in this way you never know what you’re going to get or how it’s going to work. In this case it was kind of a long shot because there were only a couple hundred of people who would fit the criteria. It was definitely atypical for one of those people we heard from to have a detailed document about this particular time frame.

Cohen: It was really fantastic. She could have not have been more willing to share her time and her experience. We talked about some really dark times in her family’s lives and she never said she didn’t want to talk about it. She was so open. I kept thinking maybe at some point she would get sick of us. She never did. It was a joy to work with her and her son.

Jaffe: She participated in many other parts of the story whether it was getting involved in the comments section of the story and being willing to write another journal entry and being part of a Reddit AMA we hosted with her.

Cohen: We wanted to make sure Wilson was comfortable with everything too. He was really open with talking about really horrible times in his childhood.

Jaffe: Both with Wilson and Aline, they saw themselves as people who went through this thing and might be able to help other people. They remember how isolated and how alone they felt. Aline hopes this story will be the one she wishes she had 8 years ago.

You included comments from both Aline and Wilson off to the side of the blog posts where they react to the blog entries. What was the thought process behind this?

Cohen: So much has happened in 8 years with the family and revelations about the doctor who oversaw the studies Wilson was in. When they read the journal now, they’re reading it from a perspective different from when it was written 8 years ago. We wanted to capture all of that.

Rob Weychert: The real trick on the design end for the annotations and the broader story was the fact that we’re jumping back and forth in time and there are a few different voices speaking as well. There are the original journal entries written by Aline and then we’ve got the present-day annotations from Aline and Wilson and then we’ve got ProPublica adding some orienting context stuff in between entries. The challenge with the design was to keep all the different perspectives and time frames coherent and making sense as a unified thing as we are bouncing between them. Everything has its own real estate.

How did you collect Aline and Wilson’s thoughts for the modern-day annotations on the blog posts?

Jaffe: We asked Aline to read through her journal and to indicate parts of the journal she had something to say about. Then Jodi and I went to their house and we all had a copy of the journal and went through and asked why she underlined certain sections. We recorded with microphones her answers to those. When we talked with Wilson, we asked him to comment on some of those things. We mostly tried to stick to that in terms of how the end result was. Some of it we ended up mixing around a little bit.

Cohen: We also asked her about parts that we were curious about.

What were some of the challenges you came across?

Weychert: This is a really interesting project. None of us ever worked on a story quite like this. It’s a unique animal so we didn’t have a lot of obvious conventions to fall back upon. We were making it up as we went along. We had a lot of disagreements along the way about what it would be until we arrived in the same place at the end. The main challenge was that there wasn’t a very clear precedent. We had to figure it out through trial and error. Geographic distance was another challenge. Jodi and Logan are in Chicago and I’m in New York. We weren’t able to sit in the same room.

What is the value in telling a story like this?

Jaffe: I think the value in telling this story the way that we told it is our original question. We wanted to know how people who participated in the study were impacted. You get that question answered from a very particular and authentic and broad emotional place. In a wider lens, it is about a family and their struggle with mental illness. You don’t often hear about how mental illness affects a family from those people themselves. They were able to tell their own story in a way that is true to them. That might resonate with other people who have similar experiences. Rather than reading a story about somebody, it’s from them.

Julia Preszler
Julia is a journalism student at Northeastern University.