The Confederate battle flag is a symbol that has long outlived the Civil War. Logan Jaffe, a multimedia producer for WBEZ’s Curious City (See Storybench coverage of that public radio news experiment here) set out to investigate reactions to the flag, a deeply emotional flashpoint for Americans. Envisioning the project as multimedia and web-based, she teamed up with filmmaker Zachary Sigelko and illustrator Jenna Blazevich.

Battleflag.us is the result. It was released in May and combines mini-documentaries with photos, data, testimonials, a timeline, Twitter posts, and text to tie it all together. Storybench asked Jaffe to explain the making of Battle Flag.

How was the project pitched?

We envisioned the project as built for the web from the start. It’s a collection of six videos with supplemental content “dives” that feature people who have many different relationships with the Confederate battle flag, so there really are many different stories we’re telling.

Why tell this story and what’s the impact been?

I think the broader narrative we hope to convey is that for many Americans, the Confederate battle flag — and ongoing discussions of what to do with it — is a deeply personal issue. And it’s very driven by emotions as well as politics. Often when the flag is talked about in the media in terms of whether it should come down from a building or be left up. But I think there’s so much more to consider about the flag’s place in America today. Like, what does it say about how we remember and talk about the Civil War? Why didn’t the flag as a symbol die out when the war did? How and why did the emblem evolve into being used by hate groups as well as in popular culture — and what does that say about how we talk (or not talk) about the hard parts of history? These are the questions we asked ourselves while making the documentary, and we wanted to answer them in part through people who carry on and/or challenge the flag’s legacies today.

Where did you get funding?

Chicago Filmmakers has an annual call for proposals for their Digital Media Production Fund. They fund all kinds of neat projects from local mediamakers, (ex: experiments with shadow puppetry, transgender oral history projects), the main requirements being the work must be address a social issue and be available free and online for at least three years. Zachary Sigelko and I applied in 2014 and got some money.

Where did you find the data, sources?

We found each person in the documentary in different ways. [inlinetweet prefix=”” tweeter=”” suffix=”says @loganjaffe”]I’m pretty good at getting lost in internet rabbit holes,[/inlinetweet] and sometimes I’d emerge from them with a person I wanted to talk to. I was particularly interested in finding people who challenge common perceptions of who embodies various political or social viewpoints. Through Facebook I found a group called the Virginia Flaggers, and they had a post complaining about a guy named Goad Gatsby, a white guy who protests them in part by playing loud rap music and holding signs that say “Hip Hop is my Heritage” when they go out flagging on the weekend. Also through that group I learned about Karen Cooper, a black Virginia Flagger who proudly displays the flag as a symbol of personal freedom. So, Facebook rabbit holes played a large part in the project. 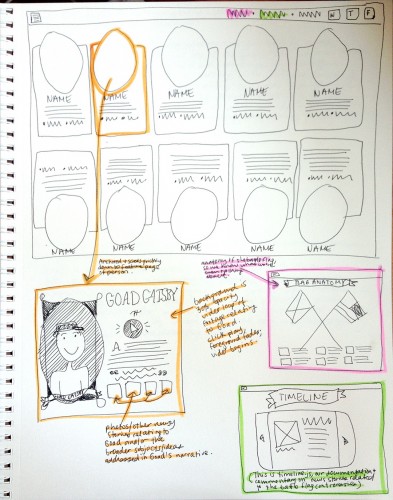 I bought a lot of notebooks and post-it notes while developing the site. I sketch everything out. My pencils have no erasers on them anymore. For inspiration, I made a folder on my desktop where I’d collect screenshots from projects or stories I liked with a couple notes about why I liked them (see: Kartemquin’s ’63 boycott, NPR’s Planet Money Makes a T-Shirt, illustrations by Thomas Nast).

There were many iterations of the design that look nothing like the end result. In hindsight I think I started sketching prematurely, but once Zach and I began asking ourselves the right questions about what we wanted our audience to understand, the sketches looked more and more the same. That’s how we came up with the format and hierarchy of full-width videos paired with “dive” sections: We wanted people to understand the Confederate battle flag through individual people, but wanted them to also understand how those people fit into larger contexts. The videos feature the people, and the dive sections, well, “dive deeper” into questions the videos raise.

We also wanted some sort of visual identity to tie all of these elements together. Through my roommate, actually, I met Jenna Blazevich, an amazingly talented artist and calligrapher who started up Vichcraft Design Studio. Seeing her work just made the whole visual aesthetic of Battle Flag click in my head. We worked together to come up with ways to tie each story together while maintaining our whole “What do we want the audience to understand?” thing, and came up with illustrated pull quotes for each person, as well as a splash page logotype and a couple other digital bells and whistles, like button designs and borders. We wanted the site to feel personal as well as reference history, so hand-drawn text and graphics just fit.

The site is actually a hack of NPR’s story, Wolves at the Door, built by their amazing Visuals Team. I don’t consider myself much of a coder, but I wanted a chance to practice and learn more about it through actually making something. Please nobody look at my ragtag hack job source code! I still don’t know what I’m doing but the site hasn’t crashed, so whatever!

Any interesting challenges? What didn’t work and what’s on your wishlist to fix?

Oh man, I’ll spare you the wishlist. I’m still working with a developer friend to smooth out some kinks, three months after it first came out! A lot of the design is still pretty much out-of-the-box Bootstrap, and I’m still working on customizing it a bit more.

I guess the overall challenge while developing the site is that I was teaching myself how to code at the same time. In hindsight, again, that was maybe too ambitious. Zach and I were working long hours on editing the videos and story content, and then I’d have to hunker down and code after all that. Those are two very different brain muscles, I’ve learned, and it became very apparent to me that, duh, that’s why these are two separate jobs for two separate people. I was trying to do both.

What should students and newsrooms keep in mind when building this kind of a project, especially on deadline?

Keep in mind your MVP (Minimum Viable Product)! It’s so easy to get carried away with exciting whizbang digital tools and the endless ways to tell multi-platform stories, but remember to think about production in terms of phases. You can’t do all the things, and you certainly can’t pull it off all at the same time on a deadline. Think really tightly about what, exactly, you want your audience to understand. What’s the minimum amount of things you can do to help them understand the message of the stories you’re telling? That’s phase one. [inlinetweet prefix=”” tweeter=”” suffix=”@loganjaffe’s coding tips”]Do that thing. Polish it. Then start building out. [/inlinetweet]

Also, tell yourself it’s okay to publicly fail. You probably won’t fail, but it’s liberating and worthwhile to be open about your process and publish something that’s not your ideal or perfect format, but is experimental. And I mean experimental on your terms. I think there’s a lot of interesting work in this sort of emerging interactive journalism field, but it’s also easy for many producers/reporters/news organizations to find it a bit intimidating, too. I’d encourage those people to think about experimentation in low-fi ways that begin to remix your relationship with your audience before a story is even published.

Where can we go for more of your work?

Zach is a fantastic filmmaker/editor/cinematographer and he’s got his own production company, ADPTpro.com. Also see his portfolio at zigelko.com. I work full time on a project called Curious City at WBEZ-Chicago, so if you’re looking for the result of most of my time, just poke around the site or (better yet) subscribe to our podcast. Plus, I’m always tweeting weird stuff.