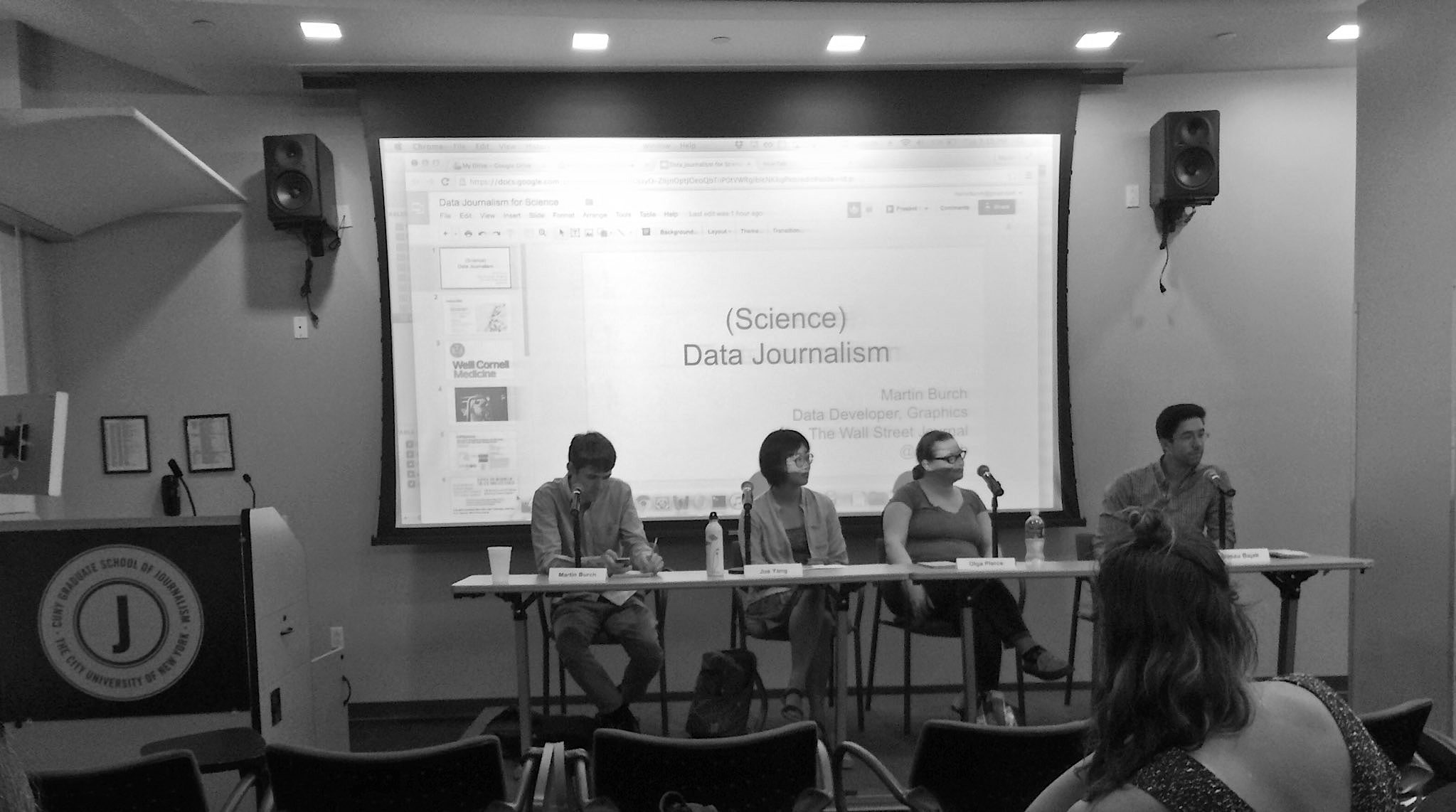 Want to get started in data journalism? Don’t waste your time learning how to code from scratch. Instead, pick a project and learn the necessary skills along the way. That’s according to panelists at a data journalism career event organized by Science Writers in New York last week at the CUNY Graduate School of Journalism in NYC.

Martin Burch, a data journalist at The Wall Street Journal, said what really transformed his career was a project where he could immediately apply the skills he was learning. As an intern at Woods Hole Oceanographic Institution, he worked with an interdisciplinary team of scientists and communicators to develop a map of how the world’s freshwater flows into the ocean. See Burch’s slides here.

But don’t data journalism job ads often ask for coding skills in several programming languages? It’s true, said ProPublica deputy data editor Olga Pierce, data journalists use many different tools for their work, such as Python to scrape data off the web; SQL to group, analyze and summarize them; or JavaScript for interactive visualizations. But few people are actually fluent in every programming language, she said. Better to be proficient in one. See Pierce’s slides here.

To get started, it’s enough to know how to handle spreadsheets with software like Excel and perhaps to learn how to code in one language, such as Python or R. (Any language will do, added panelist Jue Yang, technologist-in-residence at CUNY Graduate School of Journalism, whose loose recommendations on how to get started can be found here.)

So don’t be intimidated by those job ads, said Storybench editor Aleszu Bajak: Interviewers will usually ask not what languages you can code in, but what projects are in your portfolio. Focus on just building something! Storybench’s tutorials are a good place to start, he said. For these recruiters, Pierce had a suggestion: Don’t drive promising applicants away who won’t apply just because they don’t know two of the six programming languages you list in your job ad. Bajak’s slides can be found here.

Working on that initial project may also reveal something else: If data journalism is really for you. If you’d rather be out in the field than dissecting spreadsheets all day, data journalism might be the wrong profession, Pierce said, adding that eye strain and weight gain are common side effects. You also need a natural meticulousness about detail, and a willingness to double- and triple-check if things are correct. “You must use best practice because you cannot be wrong,” she said. What’s helpful, she said, is finding a source – in academia, perhaps – that can check your data crunching and statistical analysis.

Another job hazard: Even if your data analysis is correct, be prepared for armchair statisticians to pick apart your analysis and sometimes claim that your work is wrong. They will do so because, while traditional journalists don’t usually need to be open about how they reported an article, data journalists are increasingly expected to be transparent about their methodology. In fact, they should make sure to record all of the steps of the analysis, so others can reproduce the results if need be, Pierce said. That involves carefully annotating your code and setting up a document that details every step of your analysis.

The good news: You don’t need formal training to acquire data skills, Pierce said. And you can learn programming languages at very low cost or for free at places like codeacademy.com, Yang added, or by attending workshops or programming-related Meetup groups, which are often free as well.

To get an impression of what others are working on or to get advice for your own project, you can join NICAR’s email list-serv. Storybench has posts on how other journalists realized their projects, like this step-by-step instruction on how to recreate a map of the mosquitoes that carry the Zika virus in the U.S. from The Washington Post. The mosquito example also shows that many data tools don’t even require coding skills.

Still need inspiration? Check out this story Yang mentioned on how a journalist learned coding.

So what are you waiting for? As Pierce said: “Just do it.”

.@olgapierce: on becoming a data journalist: you don't need permission to do good journalism, just do it #datajournalism 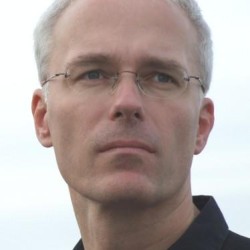 Andreas von Bubnoff
Andreas von Bubnoff is an award-winning science journalist and multimedia producer based in New York City. He trained as a journalist at the Chicago Tribune (where he was a AAAS Mass Media Fellow), Nature magazine, and at the University of California, Santa Cruz Science Communication Program.