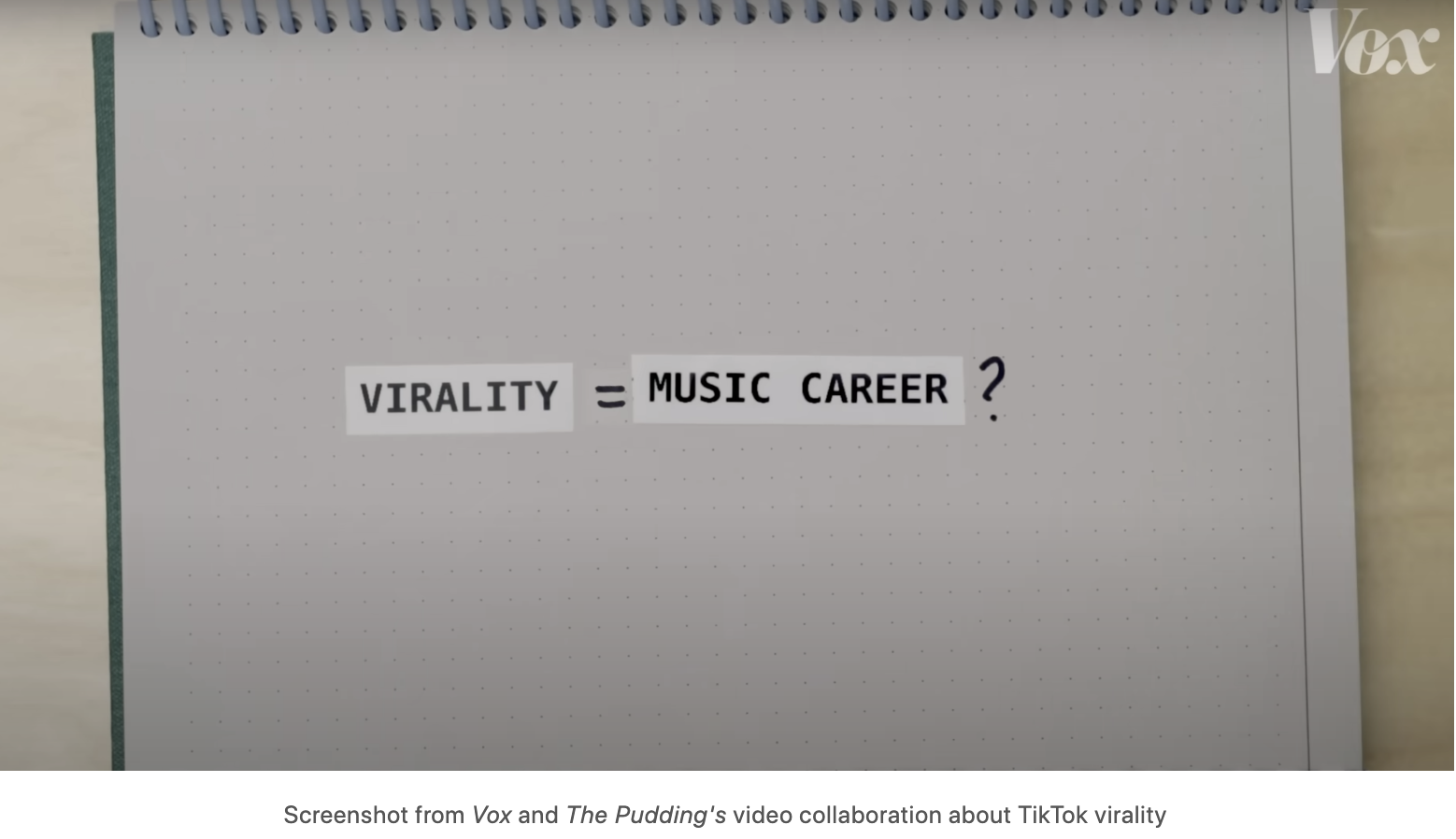 If you’re a TikTok user, then you’re familiar with hearing a snippet of a song you’ve never heard before in a video, and then subsequently hearing that same song under thousands of other videos in your feed in the following weeks. Sometimes this song comes from a completely undiscovered TikTok user who posts for fun. Suddenly, a random TikToker has created a song recognizable to a good chunk of the population.

But what happens after this person has reached virality? And how often do they actually have a shot at becoming an established artist?

Estelle Caswell and Matt Daniels set out to answer these questions through a video collaboration between Vox and The Pudding. Storybench interviewed Caswell about how the story came to be, and how they approached using data to investigate the changes this phenomenon is having on the music industry.

This interview has been edited for clarity.

How did you come up with the idea for this story, and what was your role in producing the piece?

Coming up with the idea was a very long process — just thinking about how we can tackle that box of the current state of the music industry. My eyes [were] glued on TikTok throughout the pandemic, especially as it relates to bedroom artists popping up on people’s feeds in a way that was incredibly fast, and also very public. [There was an] evolution of an artist not even calling themselves an artist — they’re just singing songs or making music, and then within weeks going viral on the platform. Then, subsequently being taken seriously in some ways by the music industry, which I don’t think is a trajectory that many independent artists have gone on. Even just seeing that all play out on TikTok was really fascinating.

[This is] certainly not a novel story; this has been covered way before — almost daily for the last four years by people like Elias Leight, who I interviewed in the piece … There’s a lot of material in articles and stories out there about this, but there wasn’t really a concerted effort to quantify it. I was thinking a lot about: “Is the algorithm making me think that this is happening a lot? Or is it actually happening a lot?” Because part of the story is that the algorithm exists to surface viral content, but also it is different for everybody. Everybody’s “For You” pages are completely different.

How did you decide that your particular data set was the best way to go about answering your question?

It was the best way to go about answering it with the tools and resources that we had; I think that’s the way I would frame it. The data set that we were looking for didn’t exist [at the time], but today it actually does exist. There are actual official [top TikTok song] charts now, which would have been enormously helpful in this situation. But for the calendar year of 2020 and even parts of 2021, there was no official tracker of the Billboard charts for TikTok.

If we were going to make a dataset that feels bulletproof, then we had to create filters that narrow the scope of the story within the pool of artists that we’re looking at. One of those things was how many posts were attached to a song. There are a lot of artists on TikTok, for example, that have massive personal pages and their presence on TikTok is big, but their songs aren’t used on TikTok. [However, there’s also] some artists like JVKE, for instance, who I interviewed and who had a massive following as himself on TikTok; his own page has millions of followers, but also his songs were used a lot. The songs being used a lot was our metric of everything, so that was our jumping off point, as opposed to trying to find a pool of artists that were just popular, but maybe their songs weren’t. There’s no real method of tracking that, that we could figure out.

Songs with a lot of posts was the first parameter. And then filtering out from there: Out of all these songs that have over 100,000 posts, how many are coming from established artists like Cardi B or Beyonce or whoever? It turns out, a lot. Most viral songs on TikTok are from established artists, and that is probably always going to be the case. When people are looking for songs to use, they’re searching songs that they know. It turns out it’s very rare that a new song from an unknown artist goes viral the way that it seemed like it was.

“Because the music industry is built around streaming revenue, they want to see that crossover to Spotify happen.”

I think we started off looking at thousands of songs, and we really found only about 120 artists that checked every single box we were looking for … From there, we asked if they previously had other viral songs. If that’s the case, then we don’t want to deal with them. We wanted new artists with a new viral song. The thing that we really wanted to focus on was: “Yes, you can go viral on TikTok, but that doesn’t get you noticed by the music industry.” Because the music industry is built around streaming revenue, they want to see that crossover to Spotify happen. That’s when [the music industry] knows that things are serious, and they want to get in on the action. Seeing that Spotify crossover for those artists was something that we really focused on, whether that was getting on playlists a lot, having subsequent songs do well on Spotify, your monthly listener count, or being editorially playlisted.

What made you decide to use a video format and the data visualization you used?

A huge part of this project was collaborating with The Pudding, and as a journalist who doesn’t have a huge data viz IQ, working with The Pudding is both exciting and scary. [Matt Daniels] knew the scope of the story and what was possible much more than I did, and so he did a fantastic job of really helping me understand which direction we could and should go in that was the most efficient and productive, but also had the least amount of caveats.

We talked a lot about how to visualize this information. We brainstormed a lot of ideas. I think some of them maybe would have been more practical as an interactive versus a video. The challenge for me was that The Pudding has the ability to create a “choose your own adventure” type of story. On interactives, you can sit and read and play around with the data and really move things around and see how it changes. But in video, it was my job to shape the narrative and keep it moving. The dots in a circle was really just the most clear and straightforward way to do that. I wouldn’t say it was the most creative way to, but you have to make things very clear and simple, so that people can consume it and understand it. The data visualization aspect of it was much more functional than it was aesthetically beautiful.

What most surprised you about what you learned in this investigation?

I think people think the music industry, record labels, and talent scouts work the way they did in the 60s when you would just go into a bar and watch a good singer sing and be like, “That person’s got talent, we’re going to sign them.” The music industry is completely enamored with data, as they should be. But I think in some cases to a fault — that it seems to be that they’re much more obsessed with songs than artists. The song is like the product, and if it’s not doing well, then the artist is not serving their needs, their purpose. I think maybe there’s going to be a shift towards more artist-development in the future.

Do you believe the way TikTok is forcing major record labels to reconstruct how they do business for the better or for the worse?

I think as long as … the traditional, giant conglomerate [record labels] exist, I don’t think that they’re … all of a sudden going to be safe havens for artists. I think what is good is that independent artists don’t have to jump headfirst into a major record label deal the way they thought they might have had to 15 or 20 years ago. I think there’s going to be a lot more independent artists that can make a living, potentially, without having to sign predatory deals. But I think predatory deals are always going to exist … I think it’s a double-edged sword.

I think the only good thing that could ever happen out of this — that I would obviously love to see — is record labels developing artists again, and really seeing their potential, and thinking about their career before anything else. But I think that’s wishful thinking. Right now [record labels] have such a stockbroker’s mentality that it’s hard to see a different way of going about it. 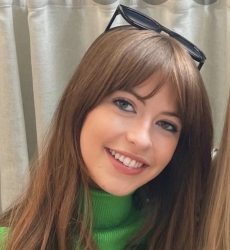 Lucy Gavin
Lucy Gavin is a multimedia journalist and honors student at Northeastern University, majoring in journalism and international affairs.