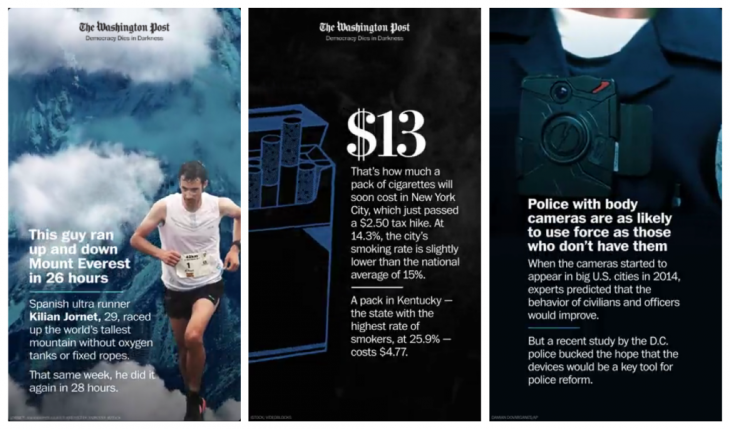 With Snapchat now hosting 173 million active daily users, the app has become a major strategy for many news organizations hoping to connect with younger audiences. Snapchat Discover, which officially launched in January 2015, features dozens of news outlets that upload content daily. These include new players like Now This as well as traditional giants like The New York Times, The Wall Street Journal and The Washington Post.

The Post launched its Discover channel in February and its experimentation with Snapchat over the past eight months provides a template for both traditional publications and new media outlets hoping to create snappy news for the platform.

Post designer Kathy Lee, who was on the Discover launch team, and current Post Snapchat designer Chloe Meister spoke with Storybench about their Snapchat strategy, from its hectic beginnings as a 24/7 operation to today’s more streamlined weekday-only schedule.

Lee, who worked on The Post’s Snapchat team for six months, said the team looks for spins on the types of stories that are popular with the platform’s users – which skew younger than most of the paper’s platforms. But they’re always striving for balance.

“We’re trying to create a balance so that they’re still interested to click,” says Meister, “and they’re getting the news that they came for, but also slipping in important things that they should know.

Snapchat Discover, it should be noted, never puts up a paywall. Meister says charging this younger audience is not the point. Rather, The Post wants to grow their allegiance.

“I think what we would hope is that it’s building up a base that knows to look for The Post for their news, and even if they’re not going to subscribe right now, it could inspire them to subscribe at a different point,” she says.

Lee agrees. Their strategy with Snapchat was always to get a foot in the door with this new user base and get them acquainted with The Washington Post brand.

Determine a standard and schedule

The Post publishes in the ballpark of 10 Snapchat tiles – or pages – a day, five days a week, with all team members working for the same eight-hour stretch each Sunday through Thursday, noon to 8 p.m., Meister says.

The team comprises designers, producers and an editor. Meister says the team communicates using Slack, where they pitch potential stories. Producers and editors take these and start using Google Sheets to come up with loose story lineups and then begin to craft the Snapchat-specific text.

“The editors start either condensing the story to kind of a break-down bit so that the reader can get a sense of it without having to scroll up and read an entire story, or will come up with a really engaging headline and then have a swipe-up so they can read the entire story,” Meister says.

“We started from nothing, essentially, and we established a style guide, animation style, rules for editorial.”

In their daily flow, The Post tries to start with what they call a “stringer,” where there are multiple Snaps in a row for the same story, the last of which has a swipe-up function that reveals the story’s full text. Meister says they usually have three stories that require readers to scroll up for the full text, while the other seven or so are just “top-layer” Snaps.

“People will only spend so much time with you,” she admits. “Sometimes we will have a really good story that we see and we know we want it on Snapchat but there’s something more pressing that’s also going to be a longform snap. So knowing when we should be tabling stories and getting them ready for the next day instead has been important.”

The Post also has an established Snapchat style guide that the team developed over their first few months, mostly through trial and error. Lee says that establishing this style guide was one of her favorite projects.

“It was fun to be part of something so new,” Lee says. “We were all trying to figure it out. It was basically like we were all in the dark together and found the light eventually. We started from nothing, essentially, and we established a style guide, animation style, rules for editorial.”

The Post features longform stories as their lead pieces in their Snapchat stringer nearly every day. Whether they tackle drug addiction or detail one woman’s complex plot to swindle her neighbors, these stories dive deep into something other than the big news of the day.

Meister says that once Post readers swipe up on longform stories, they often spend a lot of time reading the piece.

However, the challenge in Snapchat is that, while there is a lot of freedom in designing and animating the top-level Snap in a story, once readers scroll up to read the content downpage, the customization is much more limited.

“Finding ways to make the experience last and go from something that’s so engaging on top to then just straight text basically is definitely a challenge, but I know one of our goals is to try to do more stories that have a more interesting design on the downpage,” Meister explains.

Lee agrees that longform stories on Snapchat have to be compelling. That means going all in.

“We really have to commit to a longform,” Lee says. “If you lose their interest in a paragraph, they’re gone. They swipe to the next story. Just because it’s a medium that’s so overwhelmingly content-full, if you’re not good, the user can easily toss you aside and read something else.”

The Post’s Snapchat team is in the process of looking at what they’ve done so far and thinking more about what’s working for the audience and how they want to evolve the design and content.

“I think The Post is always down to try something new,” Lee says. “Always looking for the next big thing and I think that it’s really important for a news company to always be open to changing.”

“If you lose their interest in a paragraph, they’re gone.”

In a way, Snapchat has been a laboratory for experimenting with the constraints and opportunities afforded by the digital age. With Snapchat, The Post is beta-testing the future of news.

“It definitely goes along with kind of what we’ve been hearing about what the future of the news is, which is that people want their news quick and they want something that’s engaging, and I think Snapchat definitely brings that with having your news in motion,” Meister says. “Providing something that readers haven’t seen before, and creating something fast and engaging for people is part of where news is going.”

Update: This story has been updated to remove proprietary information The Washington Post was uncomfortable sharing.