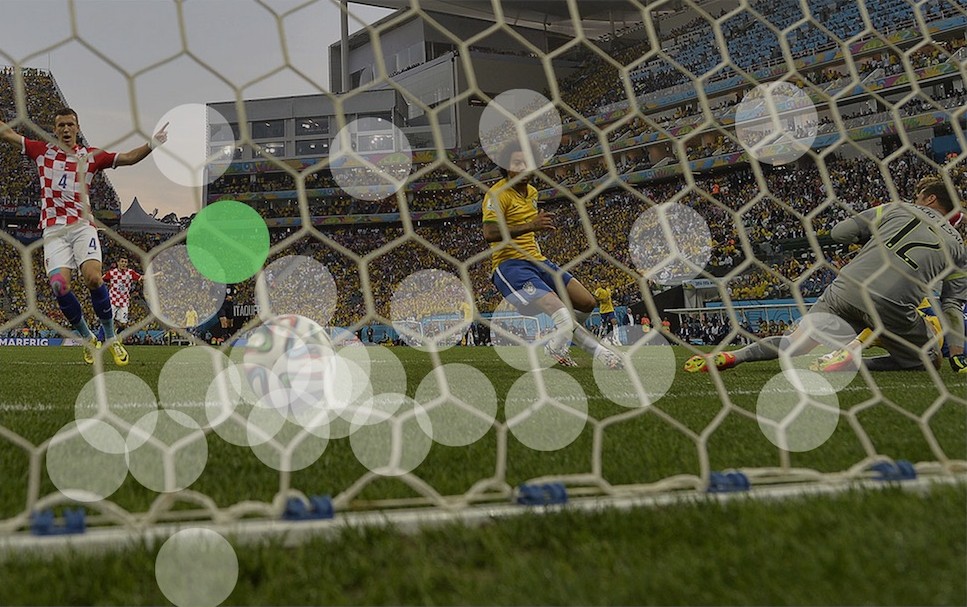 We’re always playing games. As kids it was kick the can, hide and seek, tag. As grownups, it’s more often Candy Crush and crosswords. But what if games could help tell news stories? What if a game like Candy Crush taught us how to balance the nation’s budget?

News outlets, including BuzzFeed, The New York Times, ProPublica and The Washington Post, have been incorporating games to engage and inform readers and drive new audiences to their sites. Games are emerging as a new tool for journalism offering at times a playful approach to consuming news. From popular quizzes to games that inspire empathy, this playful format is potentially rich new terrain for journalists working hard to engage readers and have them relate to the stories they are trying to tell.

But not every outlet has the budget or staff to build “Spot the Ball,” for example, a game The New York Times  created which removes the soccer ball from a series of Brazil World Cup photos and asks readers to guess its whereabouts. And not all editors are convinced, or even aware, of them as a new way to tell stories.

Integrating “gamification” into the news has its hurdles, says Max Foxman, a PhD student at Columbia University’s Department of Communication who studies how games are being used journalistically. Tight deadlines and not enough design and programming staff are two hurdles to deploying games in the newsroom. But beginning to integrate and create games is becoming easier, especially when game platforms can be repurposed for specific stories.

Foxman recently published a research paper, “Play the News: Fun and Games in Digital Journalism.” He examined whether and how journalists were applying games, play, and fun to the creation of news. He interviewed journalists at dozens of newsrooms currently experimenting with games, including Mother Jones, known for its political quizzes and The New York Times which featured the popular “Dialect Quiz.” Foxman found that the most pioneering journalists creating games were able to think like game designers when building news products that had an element of gamification. Gamification is the practice of applying game theories and game mechanics into non-gaming applications like journalism. These kind of “gamified” news products could be anything from a budget-balancing game to a pop culture quiz.

But convincing editors in newsrooms to gamify news is in many ways an uphill battle. “Part of the problem is that they don’t know enough and they don’t have the infrastructure to turn around games quickly,” says Retha Hill, director of the New Media Innovation Lab at Arizona State University’s Cronkite School of Journalism. “Even if you’re a progressive editor that’s interested in games one of the first things you have to do is make a game engaging so people come back and play it again. That’s hard.”

After running a few news games workshops with ASU students, Hill started a news game course to introduce students to the idea of marrying journalism and games. Working with ASU’s Center for Games and Impact, Hill hopes to release a “playable stories engine” that would allow newsrooms to deploy narrative news games quickly without having to learn how to use complicated game engines like Unity to create 3D story worlds.

The interface of games and journalism

The New York Times’ dialect quiz, developed in part by an intern and released in December 2013, was a huge success for the paper. The quiz has readers answer 25 questions about the kinds of words and colloquialisms they use. Upon completion, the quiz guesses where in the United States the reader is from. The guesses were so spot on that the quiz went viral; it was the newspaper’s most popular story of 2013.

ProPublica released a news game in 2013 called HeartSaver where the player must move heart attack victims to a New York City hospital as quickly as possible. The game explored the chances these patients have for surviving a heart attack in New York given the variation in quality of care across the city’s clinics.

Al Jazeera recently repurposed footage from a mini-documentary into a video game about illegal fishing off the coast of Sierra Leone. The player accrues points by investigating the “pirate fishing” alongside the journalist. The game echoes a 2009 game from Wired magazine called Cutthroat Capitalism about buccaneer businessmen off the coast of Somalia.

Empathy and persuasion in games

While some games have the potential to educate, others can inspire emotions or deeper thinking about an issue. PeaceMaker, a game about the Israeli-Palestinian conflict, is built to inspire reflection on the complexities of the conflict for the user who in the game plays the role of a leader trying to bring peace. In playing, empathy is aroused for people on both sides of the conflict and so is frustration with regional politics and constituencies. Is the game educational? Yes. Fun? Not really. Engaging? Definitely.

Games can also be used to persuade, many times without the player realizing that the game is specifically designed to shift or influence their thinking. When designers craft a game they are building into the game how, when and where a player makes decisions. The models and procedures used to build what is known as the “story world”, the game’s physical space, also include inherent restrictions.

In short, game designers create rules. For example the player can open this door, but not that one; can attack one country, but not another, and a rule-based game can be a powerful tool for persuasion. In game design theory this is called “procedural rhetoric” and designers (especially journalists new to game design) should be aware of the constraints, assumptions and biases they are building into the game. For example, the game September 12, built in response to the 9/11 attacks, asks the player to target missile strikes at gun-toting terrorists moving around in a marketplace. The time lag from mouse-click to missile strike results in the inevitable loss of civilian life. The game is a political statement. It may inspire empathy, but it also has an agenda.

News organizations using games to explore the news usually means making games out of events or expressing opinion through a game, says Casper Harteveld, an assistant professor in game design at Northeastern University. “A more formal approach to game design in journalism hasn’t really gotten off the ground,” he said.

Currently Foxman says there are two main types of games being made by news organizations. There are the games where the content drives the design, like Al Jazeera‘s pirate fishing game where footage and reporting from a mini-documentary was gamified. Or alternatively, those where the format comes first and the content is made to fit, as seen with quizzes.

Sometimes these quiz formats work right away, other times they take time to tweak. “The BuzzFeed games team will release a format that’s imperfect, see what happens, and then re-release another article under the same format,” Foxman says. “They refined the quiz for a couple of years before it took off in the way that it has.”

Inexpensive game technology like quizzes can work well for newsrooms. And once a quiz has been built, a news organization can swap in different content depending on the story of the day. The New York Times‘ World Cup “Spot the Ball” game, for example, can be repurposed for other sports stories.

Quizzes aren’t the only example of low investment newsroom games. In early 2013, the Miami Herald released Tallanasty, a corruption game about governmental ethics in Tallahassee where the player makes decisions about various political and civic issues and then the player’s choices are evaluated.

“The thinking was, it’s pretty dense information, ethics and politics is not the sexiest subject in the world,” says Lazaro Gamio, a graphics editor and programmer who built Tallanasty with reporters Elaine Chen and Danny Rivero.

“The game put you in the shoes of a politician facing these questions. I think that’s the power of games. Sometimes in journalism the goal is to make the reader empathize with someone in a situation,” Gamio said.

Gamio hasn’t built a game since leaving the Miami Herald. He’s now a graphics editor at The Washington Post and says he hasn’t found the need to build one since Tallanasty. “[Games] are a tool and a toolset,” he says. “They’re not appropriate for every single instance. It’s important to practice restraint.”

Are games right for your newsroom?

Try it on before you buy it

Are games right for your newsroom? Keep in mind game-building skills can be found in a newsroom’s current talent, with folks who do data visualization, for example. And before hiring a game team or bother in-house designers, it’s important to have a good answer to the question: Why is this project or story a good fit for a game?

“What qualifies as games and play to one group of people would not for another group,” says Foxman. “Reddit folks are the first to admit that they have a playful environment but they certainly don’t think it’s a game.” When developing a news game, think about how the audience will perceive the experience. Think about how, why, and to what extent your project is playful, he advises.

Testing is important whether you’re testing a game out on the audience or internally. Look at the newsroom as more of a resource; colleagues in editorial might be good testers.

Foxman advocates for open-source. “Organizations like Mother Jones and NPR release their code online,” he says. “The more formats you have at your disposal, the more you can tailor them to your content.”

There are a lot of new platforms and tools that are always coming out, says Foxman. “Jacob Harris, a software architect at The New York Times, created the Times’ Haiku bot and he put it on Tumblr. It’s a playful little bot. You have less to lose putting new things on a new platform like Tumblr or Twitter when you’re first getting started.”