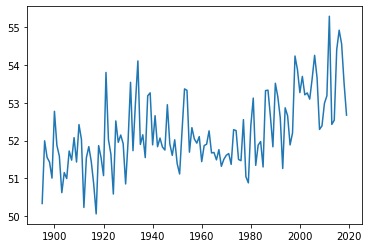 If you’ve just grabbed a new dataset and you want to look for interesting trends, making some exploratory graphs in Jupyter Notebook is a good way to start. I usually explore data in R Studio, but I wanted to become more familiar with the analysis and graphing capabilities of two Python libraries: Matplotlib and Pandas. This tutorial describes three simple graphs that I learned how to make: line graphs, histograms, and scatter plots.

First I needed some data to play with, so I downloaded the average annual temperatures for each state in the lower 48 from 1895 to 2019. The Washington Post used these data for their Pulitzer Prize-winning series, “2°C: Beyond the Limit,” and they’ve made their raw files available through github. I grabbed the file called /data/processed/climdiv_state_year.csv.

Importing data and getting started

I started by loading the following Python libraries in Jupyter Notebook. If you’re not set up with Jupyter Notebook, or haven’t installed these libraries, I recommend using the Anaconda distribution to do so.

Then I imported the temperature data into a Pandas dataframe and called it “temps.”

Next, I used the state with ‘fips’ code number 1 (Alabama) as a test case and made a line graph of the average temperature in this state from 1895 to 2019 (the years represented in the data set). I used the plot function from Matplotlib for this.

This produced a clean, legible graph, so I tried scaling up! Next, I plotted the average annual temperatures for each state, with each represented by its own line. Using a for loop to iterate through each fips code let me put all these graphs on one set of axes. (Note that the fips codes range from 0 to 78, even though there are only 48 states.)

This would make a lovely pattern to knit into a blanket, but it’s too cluttered to be informative.

Instead, I imported the Washington Post’s calculation of average national temperature, and plotted it in blue, with the trends for each state behind in light gray.

I quickly took a look at these data with a line graph, just like the ones we’ve been making.

While the national-level data alone shows a pretty clear uptick in temperature from 2000 onwards, extending the range of the y-axis to accommodate the state-level data makes this trend hard to see.

As an alternative to line graphs, I calculated the average temperature for each state over the first ten years and last ten years represented in the data, then drew histograms of these two temperature sets.

The groupby function from Pandas is a convenient way to find the mean temperature for the first 10 years.

Now for some graphs! I used the plot.hist command from Pandas.

My histograms suggested that temperatures are shifting upwards in general, but they didn’t allow me to compare how temperatures have changed for individual states. I decided to plot the early and late average temperatures for each state on a scatter plot instead.

First, I combined the early and late average temperatures into one dataframe called early_late using the concat command from Pandas.

Then I used the plot.scatter command from Pandas to plot early versus late temperature.

Although R Studio will always have a special place in my heart, Python gave me an easy way to make attractive graphs, and I can definitely see myself returning to it in the future. I think the graphs produced by Matplotlib look cleaner than those produced by base-R, and the syntax of Matplotlib isn’t as obtuse as the syntax of the R graphing package ggplot.