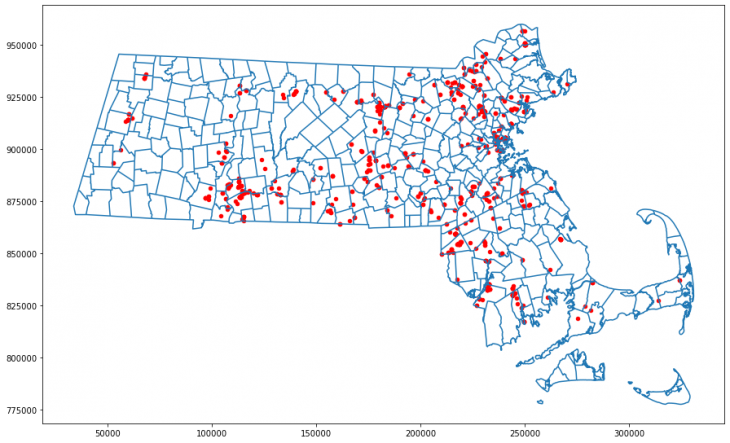 Plotting positional information on maps can reveal geographic trends and makes for an effective visualization to accompany an article. In this tutorial, we’ll use Jupyter Notebook and a Python library called GeoPandas to map where toxic waste was released in Massachusetts in 2019. Parts of this method are adapted from a post that Ryan Stewart wrote for the blog “Towards Data Science,” so kudos to Ryan for the great introduction to mapping!

Downloading the data and getting started

The Environmental Protection Agency has kept a Toxics Release Inventory (TRI) since 1987, and we’ll dig into these data to make our map.

First, we’ll download the 2019 TRI data here, and a shapefile that we can use to draw Massachusetts, with towns outlined, here. The shapefile is called TOWNSSURVEY_ARC_GENCOAST.shp, and it’s in a folder called townssurvey_shp. If you haven’t used Python before, we suggest installing the Anaconda distribution.

First, we need to import all the libraries we’ll be using, so we’ll set up our first block in Jupyter Notebook like so.

Next, we’ll read the CSV containing data from the TRI program into a dataframe called df and read the shape file that we’ll use to draw Massachusetts into a GeoDataFrame called mass.

The TRI dataframe is huge and unwieldy, so we’ll trim it down and give the columns shorter names.

Use the head command to see the first five rows of the dataframe and check that everything looks okay.

Plot latitude and longitude coordinates on a map

Now that we have a list of latitude and longitude coordinates and a shape file showing Massachusetts, we’ll put the two together.

The shape file of Massachusetts is in the Lambert Conformal Conic projection, while the waste release dataframe is in latitude and longitude, so we’ll start by standardizing the coordinate system. We’ll convert the waste release dataframe to the Lambert Conformal Conic projection rather than the inverse because maps look squished when they’re drawn on flat surfaces using latitude and longitude.

Coordinate systems have ESPG numbers associated with them, so called because they’re assigned by the European Petroleum Survey Group.

Plotting the map and the points together

Now all we need to do is put the points on the map!

And now we have a map with waste release sites marked on it!

Many data sets include positional information, whether it’s for bikeshare stations, post offices, or chemical weapon releases in Syria. GeoPandas takes a bit of work to get the hang of, but once you’re familiar with its conventions, it becomes a versatile tool for visualizing this information. Go forth and map things!