R is a powerful statistical programming language for manipulating, graphing, and modeling data. One of the major positive aspects of R is that it’s open-source (free). But “free” in this case does not necessarily mean “easy.” Learning to program in R is time-consuming and occasionally frustrating, but, fortunately, the number of helpful tools and packages is always growing.

Just like R, RStudio is free. They’ve also recently released R Markdown Notebooks, a seamless integration of code, plain text, and results that can be exported into PDF, .docx, or HTML formatted files.

Start out by installing R and then RStudio (get the preview version here.)

*If you need help installing R or RStudio, feel free to use  this installation guide.

The IDE environment has four panes:

To get started, click on “File” > “New File” > “R Notebook.“ R Notebooks automatically start off with a title and some sample code, all written in Markdown, a simple markup language. To see how the analysis is woven into the Html, click on the small “Play” arrow button right above “Run Current Chunk”:

This scatterplot will appear: 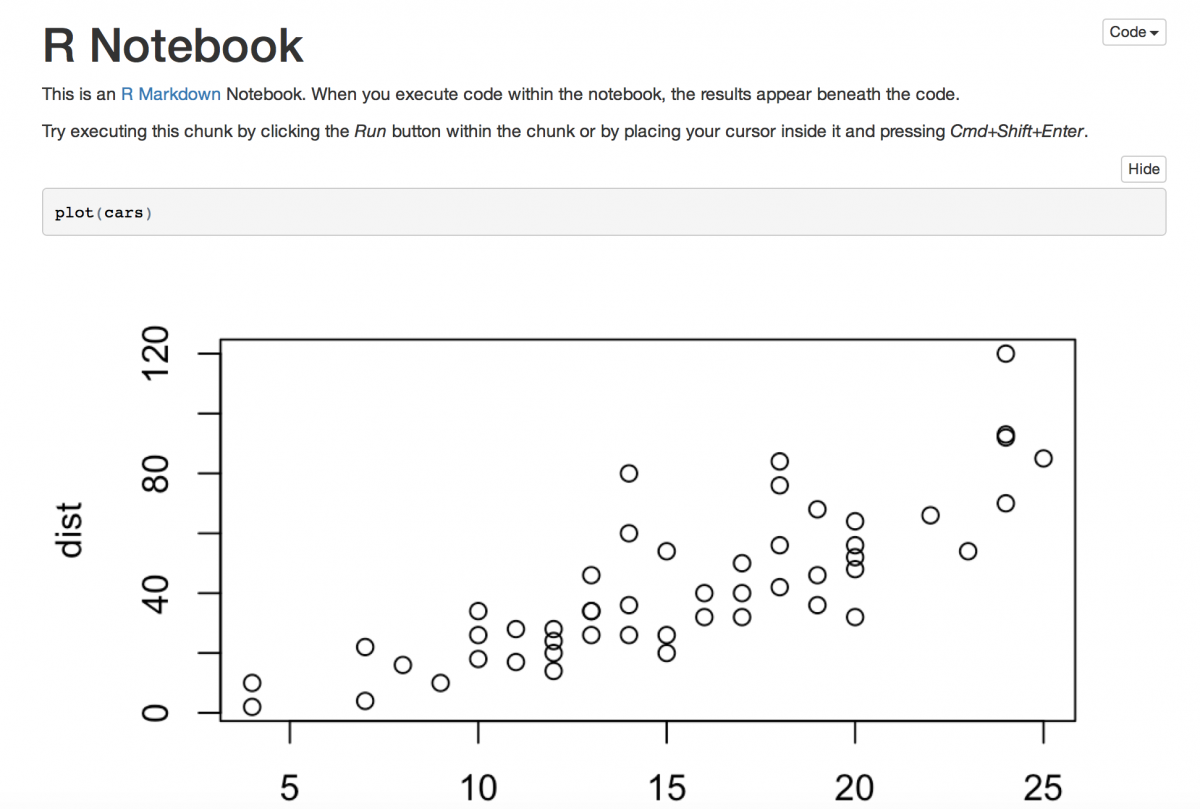 R Notebook, as you can see, can generate an Html preview of your R Notebook file that does a great job of combining markdown text, R code, and results in a clean, crisp, easy-to-share finished product.

Getting started with R: syntax, numbers and text

To get the hang of R, try using RStudio as a simple calculator. Type 2 + 2 directly into the console pane and press enter. You should see this:

You’re probably hoping to use RStudio for something slightly more advanced than simple arithmetic. Fortunately, R can calculate and store multiple values in variables to reference later. This is done with the <- assignment operator. Type the following and hit enter.

Notice the a Values table appear in the working dataset – or environment – pane listing x as 4. (The <- is similar to the = sign. In fact, the = sign does the same thing, but the typical convention in R is the <-.)

To see the contents of x , enter it into the console and press enter. You’ll see:

You can also perform mathematical operations with variables. Store 4 + 4 in a variable called y and add it the variable x

R identifies numbers and text – or “string” – characters. Text can also be stored into variables using the <- symbol and quotations.

Notice, as you add more values to your dataset, they’ll appear in the upper-right pane: 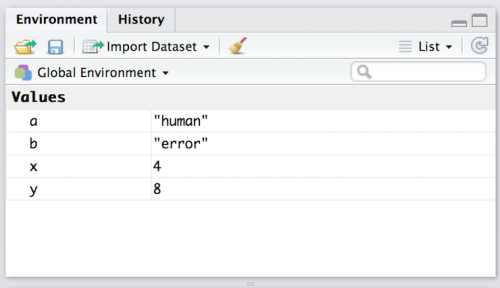 Text strings are stored differently than numerical data in R. The commands used to manipulate strings are also slightly different.

If you want to combine two strings, use the paste function:

Objects and data structures in R

R is an object oriented programming language, which means it recognizes objects according to their structure and type. The most common objects in R are atomic vectors and lists.

Numeric vectors include “real” numbers with decimal places, while integers are whole numbers. To create numeric vectors, use the command c() which stands for concatenating (a term for combining that you may know from Excel).

Below is an example of a numeric vector of odd numbers less than 10:

This statement is saying, “combine these five numbers into a vector and call it odd_vect”

If I want to create an integer (or whole number) vector, I need to follow each number with an L

The assignment operator also works in the other direction. Use it to create another numeric vector named even_vect of even integers less than or equal to 10.

The c() function works for combining separate numerical vectors, too.  Add these two variables together into a new vector called ten_vect and print the contents:

The final numeric vector (ten_vect) has combined both the odd and even values into a single vector. See it in the upper-right working dataset pane.

Logical vectors return two possible values, TRUE or FALSE. We can use logic to interrogate vectors in order to discover their type.

For example, we can use is.numeric to figure out if the ten_vect vector we created ended up being numeric or integer.

then include a noun

throw in a subject,

sprinkle in a verb,

and finish with an object

Sentence construction can be a great way to learn how vector objects are structured in R. Atomic vectors are always flat, so you can nest them all…

Both return the same result.

Finally, we can combine each part of the sentence together using  paste:

We will create a list that includes an integer vector (even_vect) a logical vector (TRUE, FALSE), a full sentence (sent_vect), and a numeric vector (odd_vect) and we will call it my_list

We will look at the structure of our list using str

Lists can even contain other lists.

This feature separates Lists from the Atomic vectors described above.

So there you have it! This how-to should give you some basics in R programming. You can save it as HTML, pdf, or Docx file for future reference.

Here’s an R Notebook file for this tutorial. 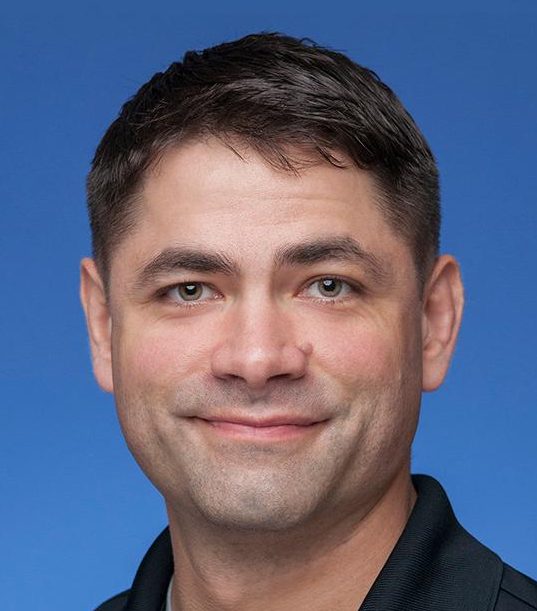