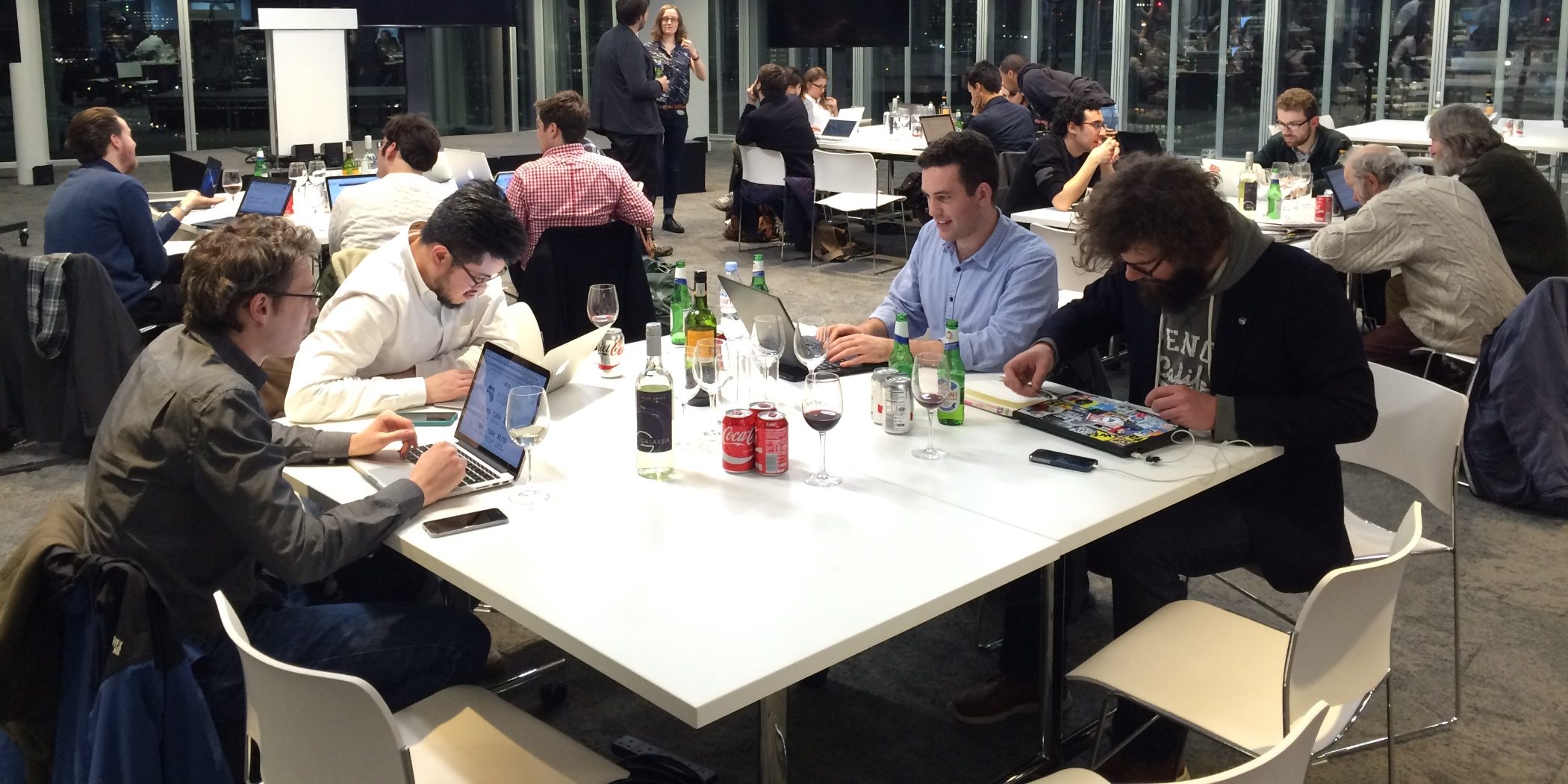 Once every month, the usual 7 p.m. flow from the News Building out into London’s pubs temporarily reverses, as technologists and journalists voluntarily trek upstairs for an evening coding session.

From its humble origins in the back of a pub, the Journocoders Meetup group has amassed regulars from news organizations across the city in addition to the first-timers it caters to. It’s tailored to the coding novice, and the organizers keep it simple: attendance (and beer) is free, laptops are required and support is available first from your neighbors, then from the organizers.

For organizers Leila Haddou and Aime Williams,  the laid-back atmosphere of the evening sessions is a big factor in the group’s success. Not only do journalists from different outlets come together to help each other through tutorials, but journalists in the same newsroom get a better understanding of what their colleagues are up to. While she doesn’t design graphics in her role at the Financial Times, Williams says that having a general understanding of code helps her communicate with colleagues who produce interactives for the newsroom.

“If I as a news reporter want to build an interactive, it’s not helpful to the Interactive team if I go to them and have no idea how long it will take them or how many of their people,” Williams said. “If they can build tools and I can code, perhaps in the future we’ll get to a place where people with basic coding skills can do the basic stuff that really good coders find a bit pedestrian or boring, and they can focus on the harder projects.”

The group recently hit its one and a half year mark, and members of the current organizing committee have some new ideas about the digital skills they’ll focus on in the coming months. Haddou, Williams and organizer Max Harlow all want to lead more tutorials on data processing — code that’s rarely credited with the same “wow” factor as interactive projects.

“We all have some interest in data analysis and data visualization, but I’d say now we’re more focused on analysis,” Harlow said. “It’s the area I feel has gotten less attention because it’s harder to see.”

“It makes you think differently about your ideas for stories,” Haddou said. “You might shy away from an idea because you think it’s not doable, whereas with some coding skills you understand that things can be automated, things can be scraped.”

Check out some of their favorite tutorials below.

Max Harlow is a developer who has worked for the Guardian and the Bureau for Investigative Journalism.

Recently we got the news that Companies House might be deleting defunct companies over 6 years old, and so many reporters came out saying that they use this every day as part of their job. Investigative journalists said that almost everything they do ends up using this resource. It shows how important it is to be able to use something like OpenCorporates, which provides the same service but on a global scale.

Once you get beyond using the search bar on the website to automating it, then you can start looking at broader stories that you might not be able to find otherwise. After being involved on these sorts of stories at the Guardian, I built a command-line tool called Reconcile which automates some of these queries. Paul Bradshaw wrote a tutorial on how to use it. Say you’ve got a CSV with a list of companies and you want to know all the people behind them. You can just run a command and produce another list of all the directors of those companies.

Neo4J was used by the ICIJ for their work on the Panama Papers. So much data has to be abstracted so you can put it into a database, but what you’re usually talking about are things and the relationships between those things. Being able to query based on nodes and relationships is incredibly powerful. You’re going to see it used a lot more in the best of journalism.

Leila Haddou is an investigative reporter for the Financial Times. Check out Haddou’s Neo4J tutorial.

The VR tutorial was so timely, and once people got it they started putting in their own images and making them visual. It had a fun element to it as well.

I do need to shout out to scraping though, and the reason we’ve done it more than once is because it is so essential to journalism and data journalism.

Journocoders has led two sessions on scraping with Python: the first is a beginner’s guide from Greg Reda using BeautifulSoup and lxml, and the second follows the guide initially developed for Investigative Reporters and Editors bootcamps held at the University of Missouri.

Future Tutorials: Scraping — And Beyond

I want to keep revisiting scraping with different languages and tools. The thing about technology is that it does move quickly. I think instead of saying “I really want to do this thing,” what I want to do is make sure that we’re on top of where the industry is heading and we’re finding a way to try out new technologies, so we can see for ourselves how they can help our journalism.

Aime Williams is a reporter at the Financial Times.

This tutorial, from Luuk Derksen and Denise Xifara of Decoded (get the data here), blew my mind because it was such a huge dataset and it was so fun to work with. To me, it’s a very realistic scenario, that you might just get the trickiness of “here’s this file” and need to figure out how to process it. It felt like you were following in someone’s footsteps and  actually reconstructing that real-life situation. Not all of the tutorials do that, although we do try to use real data most of the time. You felt like you were sneaking about, reading people’s emails and getting stories.

Want to start your own group for teaching code to journalists? Check out this blog post from Elliot Bentley and Basile Simon, two of Journocoders’ past organizers, on what they learned during their first year on the job. Bentley also spoke about JournoCoders in an interview with Storybench last year.