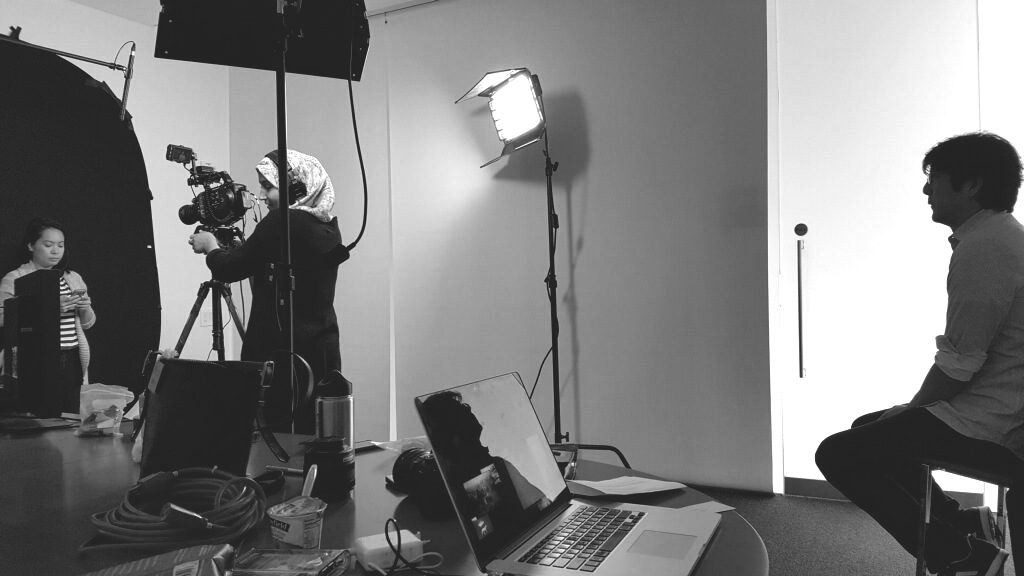 After a woman told his family to “go back to China” last month, Michael Luo, deputy Metro editor and an editor on the Race Related team at The New York Times, wrote her an open letter. Since then, thousands of Asian-Americans have come forward to share their experiences with racial prejudice.

On October 13, The New York Times released a video called “#thisis2016: Asian-Americans Respond,” showing Asian-Americans’ responding with their own stories of racism. As Erika Lee, the author of “The Making of Asian America : A History,” has pointed out, the video and Luo’s letter and the response on social media, “definitely marked a new turning point in our conversations about Asian Americans and race.”

Storybench spoke with John Woo, a senior staff editor for video at The New York Times and one of the producers of the “#thisis2016: Asian-Americans Respond” video.

How did you come up with the idea to create the #thisis2016 video? Where did you shoot the video?

We shot the video in a makeshift studio in our office at The New York Times building. We shot against a black background because it’s the best way to have aesthetic neutrality. The video was intended to be about the words and delivery of our participants, and not about the production itself.

How did you get all the Asian Americans with different backgrounds to talk to you in front of the camera?

Getting people to talk wasn’t the hard part. Everyone had stories to share, and most people were open to being on camera. We limited our search to New York City, primarily because we knew we were going to be shooting on location, and on a quick turnaround. (The momentum behind the issue was there, and we felt that it was important to contribute to the conversations that were occurring on social media.)

Scheduling was challenging. We reached out to many, many people of all backgrounds, and accommodated as many as we could. (Of course, there were also many people who were unable to attend because we were shooting on a weekday.) Everyone was so generous with their time. People took off from work to attend. Others hired babysitters, called in sick, and so on. We were floored.

How did you build relationships with the interviewees?

I emailed all of our respondents and told them that I would ask them to read their tweets, and possibly share other stories. I asked people to act naturally, and address the camera lens as if there was a friend of theirs behind the lens, about 20 feet away. We recorded about two or three takes of each tweet or story, and that was it.

It was kept very simple. You don’t have enough time to build relationships with people, but it was important that we talked and agreed together on what was going to be said . I only interjected my opinions when the subject couldn’t decide between several tweets or stories to read.

How did you arrange the sequence of shots?

There wasn’t a traditional storyboard for the video. We made selects of what worked, and then edited them in various combinations. At first, there was some effort to alternate between men and women, but that fell off early on. The video was edited quickly, a bit like the way I might edit breaking news. You can say that it was done mostly by ear and intuition.

Obviously, many people had very incendiary topics and some terrible stories to add to #thisis2016. However, we were conscious of including instances that could be considered micro-aggressions or “subtle” racism (as much as racism is subtle).

We knew that the video would be talked about. One conversation strand we were conscious of provoking was the age-old retort of, “Hey, that doesn’t sound so bad. Don’t be so sensitive, etc.” I think there’s sometimes a sense that the shared experience of racism creates an acceptable low gauge of it.Trash talking someone using a racial slur is one example of that. It may happen in the playground, on street corners, at the gym, and so on. But I don’t think that should make us deaf to it. Talking about it, to the camera, and on video, is just one way to show it front and center and get people’s attention back on it.

Once the video was published, the dialogue went back to social media: Facebook, Twitter, YouTube, and elsewhere. Even though the video is linear and one-way, everything that follows after publication is very interactive, and that’s a powerful aspect of the medium today.

Do you have any advice for journalism students on shooting video?

On a practical side, you should get multiple takes. You are in a controlled setting, and this is a luxury and privilege of yours. Take breaks and don’t induce fatigue in your interviewee. However, what’s important is that you get the story truthfully and emotionally. Prepare several different ways to ask a question, and circle back to topics and questions as necessary.

Don’t limit yourself to traditional compositions. There’s so much you can do with a subtle change to the angle of your lens, to the height of your tripod, the exposure of your shot. Use composition to help tell your story. And always be patient.