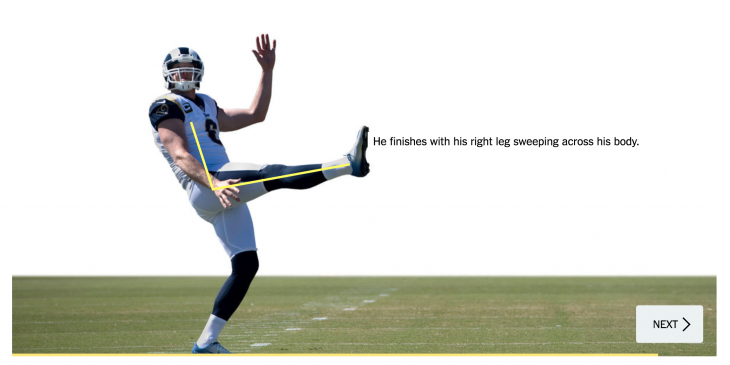 Ever wonder how Los Angeles Rams punter Johnny Hekker pulls off his famous banana kick? Do you want to know the mechanics behind the powerful swing of Yankees slugger Aaron Judge or the jump serve of beach volleyball Olympian April Ross? Using a step-by-step photo slideshow with scientific annotations, The New York Times has brought these skill sets to life in an on-going interactive series.

Storybench spoke with Joe Ward, a sports graphics editor at the Times, about how he and his colleagues created these slideshows. He also shared advice for journalists hoping to tell stories for the digital age.

What inspired the idea behind this series? Was this a digital project right from the get-go, or did you consider doing written features on these topics?

These were digital projects from the get-go. In most of the cases, there was no story that went with it… except the banana kick one. That was by Ben Shpigel and so it did accompany that, but most of the time these are little projects that are just for the web. Their intention is to sort of try to pick out one or two important things about the way an athlete does something that we can try to explore by using photographs made into sequences. Part of the issue when you’re dealing with athletes is that, especially when they’re competing, almost all of those video rights are owned by somebody. It’s being televised somewhere. So that’s always an issue. We do this a lot in the Olympics because NBC owns the rights to all the video, so we tend to shoot some photographic sequences and sort of try to explain the action in that fashion.

How did you select the athletes that you did? Was including beach volleyball and tennis a concerted effort to give readers a look at some of the less mainstream sports?

I think we try to do a real mix. We did one with Aaron Judge, a Yankee slugger, and we also did a beach volleyball server. We don’t want to just do the big four sports or we don’t always just want to do the slightly more obscure sports. Because we’re in New York, so many athletes come in and out of here. We don’t usually get a lot of time with them, but is there anything we can do quickly while they’re in town? Do a quick photographic sequence and then just tell us one or two interesting things about what this person does, instead of trying to do a whole breakdown of what somebody might do.

I think in the beginning we actually may have put too much information in there. I think sometimes if you have the information you feel compelled to share it with everyone. But maybe sometimes these things work better to just say, here are one or two really cool or important or interesting things that these athletes do that maybe others don’t do or don’t do as well.

How were these stories reported? Did the athletes directly break down their form?

It depends. The Aaron Judge thing – I actually did that one myself because I used to be a minor league hitting coach. The other ones like the [beach volleyball] serve, we interviewed April and her coach. The punter, we interviewed.

When you’re watching these athletes compete in real time, it’s hard to get a good sense of their mechanics because the action happens so fast. Can you walk me through the process of how you were able to slow it down to give a step-by-step look? What tools did you use?

Jon Huang has actually built a program for us… we call it the Muybridge program. That basically allows us to take any number of photograph sequences – it’s driven by a Google Doc – so basically we’re just taking images, cropping them [and] putting in some caption information. Part of the program he built, we can say where we want the text to go like ‘top middle, top left, bottom left, bottom right.’ The program that he has written will sort of compile all of that and make it so it’s just a swipe-through or a click-through user experience.

What is the biggest challenge in putting together a piece like this from the technical side of things?

There are some Photoshop skills. It’s always better to do these things on a tripod, but it’s not always possible. For instance, if you’re shooting Aaron Judge at a Major League Baseball game, if you’re in the photographer’s booth they allow monopods in there but not tripods because there’s just not enough room for everybody to have a tripod. What happens is that no matter how still you try and make it, he’s not going to be in the exact same spot for every photograph. Say we take nine, or ten, or eleven pictures in a sequence, we have to go in and make sure he lines up exactly. So, we sort of crop them and move them a little so it looks like a smooth sequence [and] he doesn’t look like he’s jumping around a little bit. It kind of looks like a video gif or something. There is that kind of tweaking you need to do.

Other than just sitting down and learning these programs by hand, how would a young journalist go about acquiring the skills necessary to produce a piece like this?

You have to be a little bit creative. If you want to do something like this, all you really need is a camera to take some pretty good pictures and try to get a sequence of somebody doing something that’s going to be real fast like a baseball swing. You’re going to want a camera that can shoot a lot of frames per second. We tend to use cameras that shoot ten or eleven frames per second. Sometimes we need that many. Sometimes we don’t. But at least you have them if you need them, like if you’re looking for a very specific part of something. Maybe when somebody is striking the ball.

Do you think the future of sports reporting will see more pieces like this where the digital elements outweigh the written words?

I think at the Times especially there is a real push towards visual journalism. Our web presence is always our first priority now, it’s not the print. It used to be. I’ve been here a long time, so I’ve seen that change over the years. It used to be you do everything for the print deadline, then whenever that was over you’d put something on the web. It’s the opposite now.

[perfectpullquote align=”right” cite=”” link=”” color=”” class=”” size=””]“It used to be you do everything for the print deadline, then whenever that was over you’d put something on the web. It’s the opposite now.”[/perfectpullquote]Whatever we do, we do for the web first and usually that’s a visual storytelling kind of thing. Even sometimes when the reporters are writing stories or as graphic editors we tend to do a lot of our own reporting and writing, but even if we think it’s going to be a story-like situation where we’re going to interview people and we’re going to write stuff, it tends very often now not to be just 800 words with a couple of photos or graphics in it. It’s often driven by the visuals and the connective tissue between that imagery is words. But it tends to be a visual first situation.

I think sports really lends itself to that kind of storytelling. If you’re going to send a beat writer out to do a Major League Baseball game, he’s not going to be able to come back and use video to tell his story, so you have to be a little more creative. You have to pick out specific things about the game you want and then maybe use photos. I do think that though part of what you’re seeing where there’s education in sports is maybe that’s part of the issue there, the difficulty in having rights to use a lot the imagery that comes out of these professional sports. But we’ve managed to work around it.

If you could do a similar piece on one athlete in the history of sports, who would it be and why?

I think Muhammad Ali. Maybe a knockout punch or maybe a rope-a-dope or maybe something like that where you could sort of interview him afterwards or have that moment and have him describe it.

What’s your advice to future sports journalists who want to embrace this new era of digital storytelling?

I would tell them not to concentrate too heavily on one thing and to have themselves a bag of tricks… by a bag of tricks I mean: Are you able to shoot a little bit of video? Do you know your way around a camera? Can you interview somebody? Do you know your way around audio? Can you write a pretty good story? It doesn’t have to be great prose. I think what’s happening more and more especially as media companies get tighter and tighter, people are asked to do more than one thing. You’re not just going to be a beat writer like “here go out and write the game story every night.” We just don’t do that at the Times anymore. We have very few beat writers now. Instead, it’s go out and find something interesting, even if it takes you a couple of days. 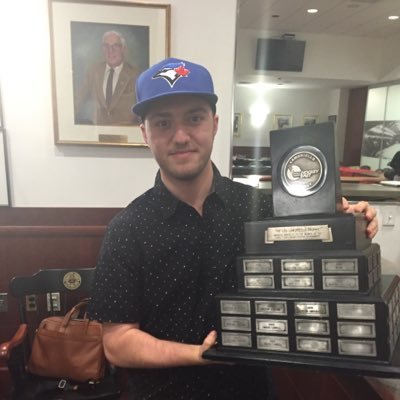 Josh Brown
Josh Brown is a student at Northeastern University.