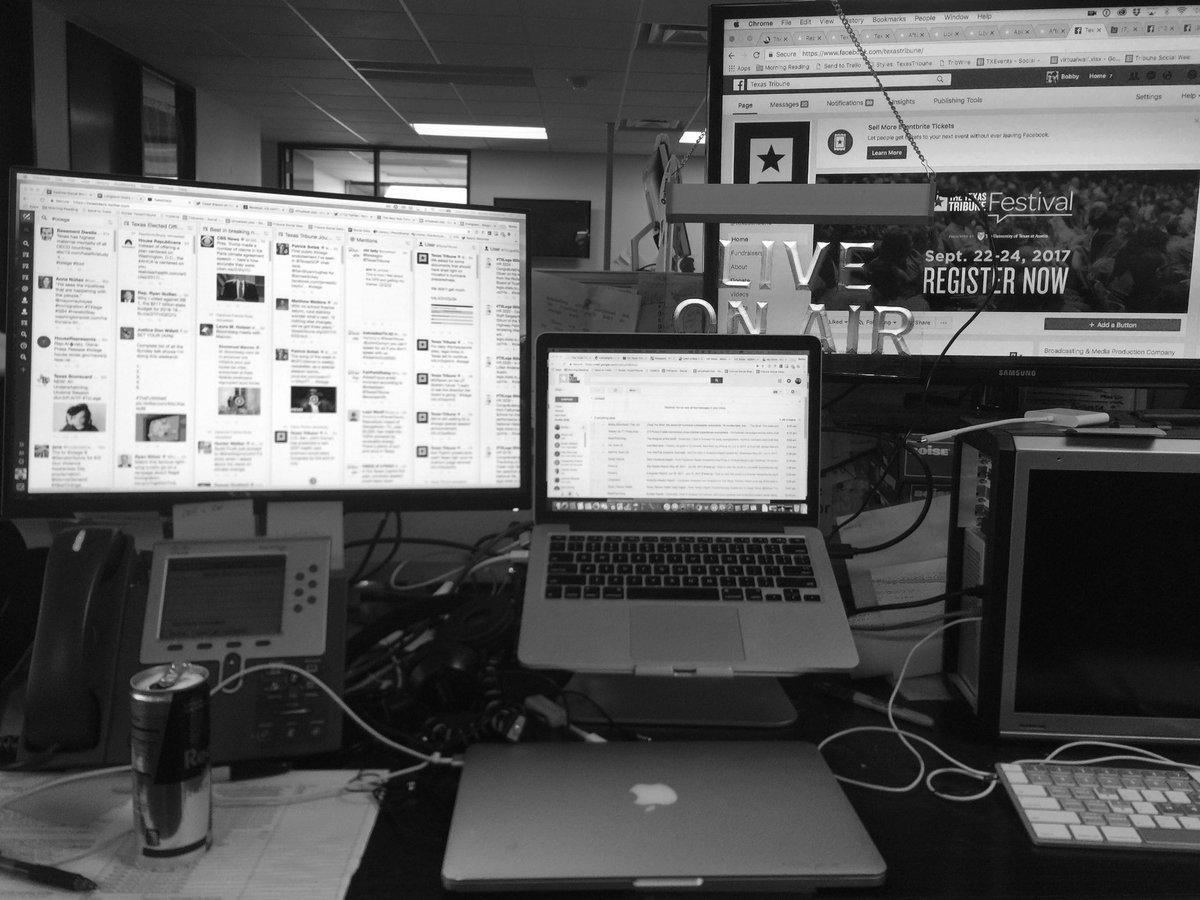 Sending out a thread of tweets is not exactly revolutionary. But, increasingly, reporters and news organizations are using “tweetstorms” as a way of telling a story that won’t fit into Twitter’s 140-character limit. The Texas Tribune is one the news outlets currently exploring the practice as a new storytelling strategy — with great success.

“Tweetstorms always do well and they always perform above average for us,” says Bobby Blanchard, the Tribune’s social media manager, who has overseen the paper’s social presence for about a year. “In January, we did one on the border wall and got 3 thousand retweets.”

We asked all 38 Texas in Congress if they'd endorse a "complete" border wall.

What is your criteria for choosing stories for tweetstorms?

I would say that we do it when it is suitable. There have been instances when we created something on-the-go, but we normally write them up in advance. Usually we do tweetstorms for long-form pieces that our reporters write, or some investigative work. We have also done a lot of roundups for events or statements about the things we cover at the Tribune.

This week [ending on August 4], for example, we had two stories on free summer meals [for school children] in Texas. One on the data, training and the reasons why the state is failing in feeding much of the children that qualify. And the second focusing on two different communities. And we did tweetstorms of each of those stories. [See here and here.]

How often do you use them?

There have been some weeks when we have done a tweetstorm every day, and maybe even multiple tweetstorms a day. And then there are some weeks we would do one or two tweetstorms. It happens when it is called for, but we do not have a target number.

4/ Each summer — most days of the week — Clara Crawford drives her old van 35 miles to gather up about 20 kids. https://t.co/KZ1QNHQFvN pic.twitter.com/nHUZE79tSP

How do you plan a tweetstorm in advance?

I get a fairly long heads-up — several weeks, sometimes even longer — when we have a big investigative project or a really long-form feature coming out. We typically do a tweetstorm every time we have an investigative project. And when I hear about something like that, I’ll start planning them. Once I’ve looked into that, I ask reporters to “show me copy when you feel comfortable,” and I can get to work on drafting the socials to be formatted for this.

There are times when a story might come about very suddenly, like a breaking news story. Given its nature, a tweetstorm is wanted. One example I can think of is when Donald Trump announced his ban on transgender Americans serving in the military. Our D.C. Bureau Chief [Abby Livingston] went around and did a whole round-up with Texans in Congress responding to whether they supported the ban or not. And that was somewhat of a quickly developing situation, so we had to act on the spot. And that tweetstorm I just did in live-time. Most tweetstorms I would draft in advance, print out and read over, think about it, and make images for it in advance, but for that one it was live-time because it was newsier.

What other elements do you include?

We use the tools we have. I try to use a unique picture in every single tweet because, otherwise, it is just the same preview image from the story, and that does not stand out anymore after a while. In general, we have a lot of freelance photographers, so we have big cache of photos available to us.

For the Trump [transgender ban] one, what I did is I had screenshots of the statements. Last week, we had a lot of pictures. Some of them on our site, but a lot of those photos went unused, so they were available to us for those tweetstorms and for other places like Instagram, Snapchat.

In general, we try to be crafty with the images and videos we use on Twitter. We try to always use an image, video, or some multimedia content because that helps stand out, and helps with engagement and reach.

Tell me more about how these tweetstorms perform.

We definitely have always been successful with them, and they always do well and perform above average for us. In general, I can tell you that the first tweet and the tweetstorm almost always performs above average for us in terms of engagement on Twitter, and they almost always result in a spike in traffic on our site. The ones that do particularly well are the roundups of Texans in Congress’s stances on issues.

What is the main purpose of  the Tribune’s social presence?

We cover some wonky policy issues here. And so, the main goal is to make sure that readers and followers understand what this stuff means and why it matters. Often what we do is try to translate and explain things to people who follow us and read us on Facebook, Twitter, Instagram, or Snapchat.

An example of that is on Facebook: we do a lot of live videos where we livestream the Texas House’s and the Texas Senate’s meetings, hearings. We like, in the video, to explain what is happening and explain the amendment and bill-making processes to people, because it can be pretty complicated stuff if you do not do this every day. We usually do this somewhat like a sports commentator, in the corner of the video.

That is one example of explanatory work that we do, trying to make sure that this stuff is digestible to our readers and making sure that they can understand why it is important and why we are telling them about it.

We also use lots of images, quote cards, bullet-point lists sometimes. A video or a multimedia stream is really great at making quick social videos that explain what is going on.

What about the use of videos?

I think almost every video we do is tied to a story elsewhere on our site. We may sometimes promote video that stands alone, but they often either originated the stories or partnered with stories. And so, an example would be on our Twitter account about property appraisal and taxes bill notification. That is an issue covered extensively this week, but we also wanted to make it for people watch it quickly. Everyone consumes the news differently, so I think we want to make sure that we have that available to be consumed and read, or watched or listened to, in different formats.

How does the Texas Tribune use Snapchat?

We do not do Snapchat stories every day, but we do it most days. Those stories are often repackaging content from our site for Snapchat, so it can be viewed there. Snapchat recently added links to its stories, so you can swipe up and read the links from the phone, which is nice. We do not see a ton of traffic from Snapchat. Most of all, the reason why we do Snapchat is for engagement, and not really for clicks.

What about Instagram Stories? How is it compared to Snapchat?

I think it is actually very different from Snapchat and I cannot approach Instagram Stories the same way. The images [on Instagram stories] are much shorter on time length. On Snapchat, you can upload images and let people click off at their own pace. Instagram has a much shorter window, and I write them down much quicker, with snappier soundbites and shorter sentences than I would for Snapchat. They are similar products but I think people are still using them differently.

Instagram allows you to post pictures but will not let you use a link in the description. How do you guys use that feature?

Not every social media platform you use has to be about getting traffic back to your website. It can be just about storytelling, and that’s OK.

“Not every social media platform you use has to be about getting traffic back to your website.”

So, when it comes to tracking our goals on Instagram and Snapchat, it’s less about looking at referral traffic to our site and more like looking at engagement: people adding us, or people liking our content, or interacting with us by commenting, or they are talking back at us. That is the metric that I am concerned about with Snapchat and Instagram.

We have a multimedia team and they produce all our video content, including all our social video content. We also have an art team, with three people. They produce some of the images for social, but myself and Giulia [Afiune, an engagement fellow and alumna of Northeastern’s Media Innovation graduate program] certainly make some too. We are both part of the engagement team, with five people.

You recently used ScribbleLive for live-chatting. Tell me about that experiment.

That was something we planned pretty far in advance. We were doing a story about a series of bills that didn’t pass in the regular legislative session and we wanted to give people the chance to talk to our reporters about the series, about those bills, and about the upcoming special congressional session.

We announced that on a Monday and it was for Friday and throughout the week we curated questions in advance from Facebook, Twitter, Snapchat, our website, from all over the place. That was a lot of fun. We had reporters on staff contributing and taking part in this big live chat with our readers. I recall most of the questions were about criminal justice, which is something we did not anticipate, but it was interesting that that’s the direction the conversation went. It was a really policy-wonky chat and really successful.

How is that live chat different from the Reddit AMAs you do?

We have done Ask me Anythings on Reddit with big sources. Last year, we had a story about police shootings in the state, and we did an AMA with a former police chief who is now a professor and studies police shootings. That was really interesting and insightful.

AMAs and ScribbleLive are two different things for us. Scribble can be staff-led and include a lot of different topics. AMAs are more focused on one idea, one subject.