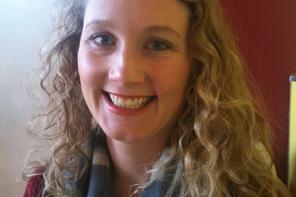 Laura Amico is editor of data and multimedia projects at The Boston Globe. In the newsroom she sits between graphics, photos, video, illustration, and print and helps coordinate those groups for cross-media projects. In 2010, she founded Homicide Watch, a site originally launched in Washington, D.C. and currently up-and-running in Boston, Trenton and Chicago that covers homicide from crime to conviction in those cities.

Last October, Amico coordinated the production of Chasing Bayla, an immersive story about one man’s quest to save a whale ensnared in fishing nets. The story features over 6,000 words juxtaposed with multiple photographs, videos, audio recordings, and animated illustrations. Amico recently spoke about the project at The Nieman Foundation for Journalism at Harvard.

Laura Amico: When I came into this story, the challenge was that we had so much on the palette. We had so many ways of telling the story. Inevitably, we had a lot of people working on the story. Everyone had an idea for how to present it. The videojournalist wanted to make a documentary, the photo department wanted to do a big photo essay, the reporter had a terrific written story, and we were speaking with illustrators and the graphics department, too.

How did you approach the planning and building of Chasing Bayla?

[inlinetweet prefix=”” tweeter=”” suffix=”says @lauranorton”]My guiding principle is to be immersive but not overwhelming[/inlinetweet]. I spent a lot of time developing and pushing our mission statement. Here’s the final line of the statement: “Readers will feel sympathy for Bayla’s entrapment and empathy as Moore tries to develop a way to save her.”

How did you plan the juxtaposition of visuals and text?

When I read things online, I don’t want stuff cluttering my vision. When I talked to others on the team about this, they agreed. So we asked, what can we do to create the best reading experience possible for this long of a story? From those conversations we built the clean-text experience for people who want to sit down and just read.

But we had a wealth of material on the visual side and those really told an interesting story, too. I wondered: could we create the full narrative arc of the story using just visuals? Photos, videos, illustrations, and graphics? That’s what we tried to do.

The two sides do track together so if you’re a reader that likes to experience both, it’s seamless to go from text to visual. We didn’t see many users doing this, though.

What was your role?

My role was project manager, making decisions on what the approach was going to be and which material to use. It was a large group of people working on this– from the reporter to the developer to the copy editor. [inlinetweet prefix=”” tweeter=”” suffix=”says @lauranorton”]Everyone who touched the project is named in the credits and I’m really proud of that[/inlinetweet].

In terms of a team for a project the size of Chasing Bayla, as a minimum, I like to have the reporter, the editor assigned to the story, a photo editor, a video editor, and a developer or designer. Once this team has some of the foundational work underway we share up and out as necessary.

How did you approach making this for mobile?

On mobile it shrinks down to a more traditional river format with a select number of images. Dealing with mobile was one of the hardest things to think about on Chasing Bayla because it really is beautiful big. Thinking about the mobile approach, and having to seriously pare down the number of images in the mobile version, showed me just how much more of our palette we were able to use because of our format. I felt like there was so much good material that I didn’t use, but if we had published the story in a more traditional way, we would have had to cut so much more in order for the text to not be repetitive of the video, and cut the video to not be repetitive of the photos, etc.

How did you approach user-testing?

We tested it extensively throughout the building, starting with print and sports reporters, but actually spending most of our testing time with the H.R., front desk, and cafeteria staff. We put the computer in front of them and said ‘go.’ We watched what they did and when they were done, we asked them questions ‘we noticed you did this’ or ‘why did you do that.’

What did analytics tell you about The Boston Globe audience?

We built custom analytics into Chasing Bayla. A third of our users primarily used visual side of the story, two thirds stayed primarily on the text side. Of the users that went to the visual side, however, they spent about 50 percent more time with the story than the text users.

What did you learn from making Chasing Bayla?

[inlinetweet prefix=”” tweeter=”” suffix=”says @lauranorton on @storybench”]I started on Chasing Bayla on my first day at The Boston Globe[/inlinetweet]. It was already several drafts in, I believe. It was a good introduction to the newsroom. I had the opportunity to meet a lot of people very quickly and learn about how the newsroom works and what the priorities are.

Any advice for journalists and newsrooms playing with these kind of story designs?

I have three tools I rely on:

Empathy mapping helps us put into words what we want readers to get out of the story. I ask reporters and editors, What do you want readers to see, hear, think and feel, say and do when they  finish the story? Then I ask about what readers have seen, heard, thought and felt, said and did about a topic before reading the story. Our job then is to build a bridge between these two.

[inlinetweet prefix=”” tweeter=”” suffix=”@lauranorton tells @storybench”]I start every project with a mission statement[/inlinetweet]. It’s a lesson I use from Roy Peter Clark and it’s incredibly helpful. Clark says about mission statements in Writing Tools that they turn your vague hopes into language, can be tested, expanded, and revised, and bring into focus individual stories or a body of work. I add that they tend to be specific in context but general in intent. I use them to guide the decisions made by all the departments on a project. That way the reporter and the developer can trust one another because they have the same mission even though they “speak” different languages.

Having an open process

Finally, [inlinetweet prefix=”” tweeter=”” suffix=”says @lauranorton on @storybench”]having dedicated open demo time helps include people in the process[/inlinetweet]. It’s also a time for everyone to check in at a time that isn’t disruptive for anyone else.