Localore: Finding America, a public radio and documentary project currently underway in 15 locations around the United States, is offering a look into an America seldom seen. A child’s view of Knoxville, a fly-over of Alaska’s disappearing coastline, and photos of an Ecuadorian meal in Kansas City are just three vignettes being published on Finding America’s new website launched today by AIR, the Association of Independents in Radio.

Want a deeper dive into these news experiments? Storybench caught up with the creators of three Finding America projects last November.

And now, for a look under the hood of their new website, Storybench spoke with Teresa Gorman, Localore’s supervising producer, Betsy O’Donovan, editor and digital strategist at AIR, and Sue Schardt, executive director of AIR.

Finding America is fantastic and the website looks great. But how will you drive traffic?

Gorman:  Each of the projects is touching on stories that transcend where they are. Gun violence, incarceration, the military. We want to get those stories to people that might not live in the town in which it was reported.

O’Donovan:  It’s a mix of broadcast, digital, and street media. We’re inviting organizations to draw people from the broadcast audience to this site as well. It’s about creating paths to discovery.

The live feed is cool. What’s going on there? 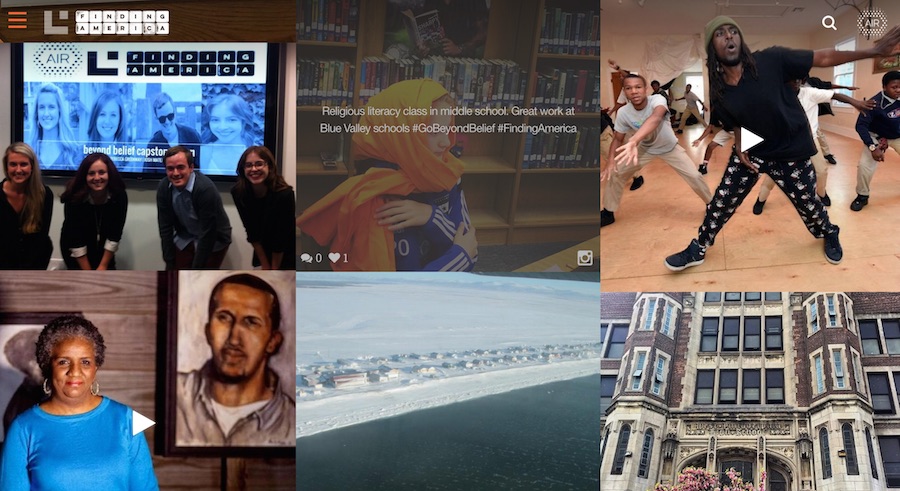 How did you build the live feed?

Gorman:  The live feed uses a tool called Juicer.It’s pretty easy to use. Through Juicer, we log in and we moderate the which posts go up and it pulls visuals with the posts. We worked with Juicer to customize how it works. The goal is to go completely live.

Tell us about the “How They Connect” section. You’re finding a way to categorize these stories?

Gorman:  The themes has been an interesting editorial process. We didn’t ask the teams to have themes. We didn’t want them to have to find sources to fit a story. Instead, by analyzing all the stories and social media that’s coming in, we do these bundled moments. Right now it’s Working, Boundaries and Praying. We have a ton more that are on our list. We’ll see how many we get to.

Who built the website and is it open source?

Gorman:  We worked with three really great freelancers and they built it. It uses Wagtail as its CMS, which is a new Django CMS. They made sure it was on Github. Customization is great but it’s hard to sustain customized work. If we’re thinking about small newsrooms, we’ve asked them to consider using existing tools. That’s why we made this open source.

What can newsrooms and storytellers learn from Finding America’s new website?

Schardt:  First and simply, we hope to inspire and encourage journalists and storymakers committed to finding new ways to represent a bigger sphere of what it means to be living in America today. Our 15 communities are just a start, and emblematic of what’s just up the street from virtually every public media news room, every story maker out there. Our Localore producers put aside the traditional gathering of a story to plug a news hole or fill a column, and entered these neighborhoods with humility, curiosity, and a willingness to — over time — let the people they met determine what was important to them, and what platforms were best for carrying it back and forth amongst themselves and to the larger community. They were “of service” to the community in a new way, and this begins for us a new understanding and invention of pubic media for all the people.