The juxtaposition is staggering to witness. Search for posts related to Hillary Clinton, for example, and you’ll see such opposing stories as “Bernie Now Wants a Say In Hillary’s Cabinet Picks” on the left and “Former Clinton VP Al Gore Still Won’t Endorse Hillary” on the right.

Storybench spoke with Jon Keegan, a visual correspondent for the WSJ who built the visualization “Blue Feed, Red Feed,” which updates hourly.

What was the goal with this project?

Our main goal was to use this data – which gives us a rare glimpse into the Facebook ecosystem – to build a view of the current news cycle that is very hard to create for a typical user. We also took time to make sure that our description of Facebook’s study and data were accurate, by communicating with the authors of the study ahead of publication. 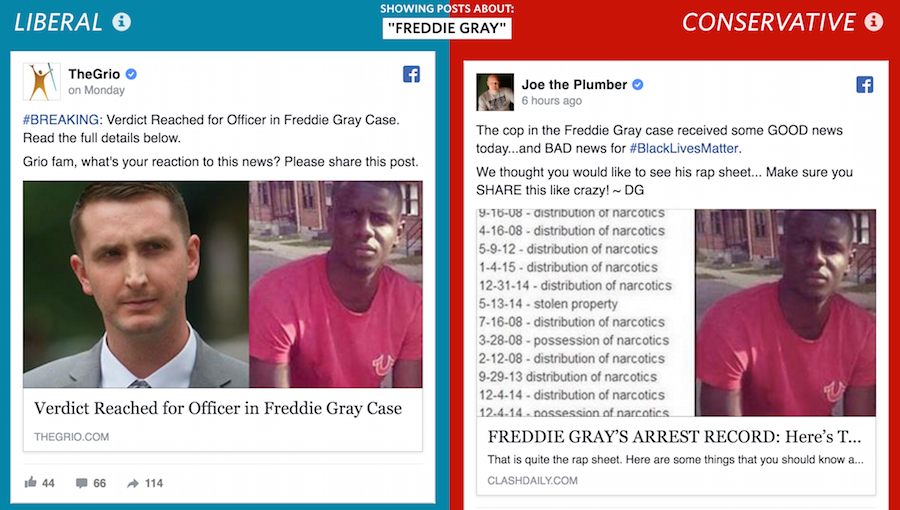 The list of sources came from data released by Facebook that was used in their 2015 study of 10.1 million users, over six months. These users, who had self-identified their political leanings in their profile, were anonymized and Facebook tracked the “hard news” stories that they shared. All of these users were placed into one of five groups based on the description they entered for their political identity: Very Liberal, Liberal, Neutral, Conservative or Very Conservative. Each link that was shared was scored based on the percentage of users from each group that shared that link. Then, the links were group by source, and each source was scored by the percentage of links shared by each group.

How did you slice the study data?

Facebook released a list of the top 500 sources with their replication data at when they published their research in the peer-reviewed journal Science. We included sources from this list where a majority of the links that were shared were from people in the “Very Conservative” and “Very Liberal” groups. We did not include broad sources like YouTube, Twitter or Wikipedia and removed some that were no longer active. And we filtered the list to only include sources with 100,000 followers (likes) or more. We ended up with 130 sources (you can see that list here).

How did you use Facebook’s API to pull the stories?

Using Facebook’s Graph API (Ed note: an application programming interface that allows users to query and extract Facebook content), we pull new stories from the public Facebook pages of these sources hourly, and filter them by a simple keyword search topic view.

What was the most challenging thing about adapting a research article from Science into something any reader could understand?

We worked very hard to write a clear, comprehensive Methodology note, as we wanted people to be very clear about what our intent was for this project. People often have an emotional reaction to the content they see on one side, and we wanted to be very transparent about exactly how Facebook scored these sources, and how we were using them.