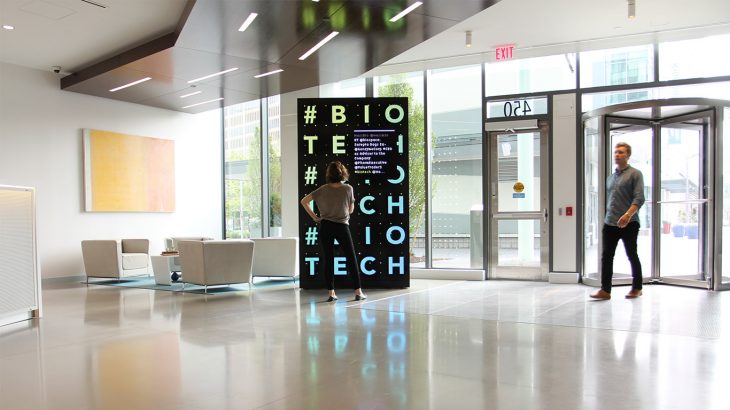 Making data physical, visceral, and emotional is the primary goal for Sosolimited, a Boston-based design studio. “The incorporation of live data, especially user-created data, makes the space engaging in a way that a lot of people aren’t used to,” said Wes Thomas, a designer and tech expert at Soso, on a recent visit to Northeastern University.

Sosolimited, founded in 2003, creates art installations, experiences and visualizations based on data. [Storybench has featured their news headlines navigator in the past.] Designer Jackie Littman said the installations may become a permanent presence in the company buildings, while experiences are generally created for shorter events and visualizations are hosted online.

Some of Sosolimted’s pieces are based on somewhat static data, like the Inventor Connector, an interactive network graph installation of sorts created for telecommunications company Qualcomm. The installation allows Qualcomm employees to swipe their ID cards and see their connections with other employees, as well as information about their personal innovations and contributions to the company.

Other projects change throughout the day, like the Innovation Clock that displays themes of Cambridge-based Twitter conversations surrounding innovation. But perhaps the most dynamic pieces Soso creates are based on user-inputted data.

“I think for us, when we can get the data from users, that means we have an opportunity to allow someone to really connect with the piece really personally,” Thomas said. “For me that’s a distinguishing part of our work.”

One such installation is Colorspace, a sculpture in the lobby of Boston’s John Hancock Tower. The sculpture itself is a wall of suspended light fixtures. People in the lobby can text anything to a phone number listed on the wall, and the text will be interpreted and converted into a series of colors that will instantly spread across the wall of lights.

However, the original message is never displayed publicly.

“It ends up being a very private experience in a way,” Littman said. “You could be in the lobby and show your friend what you had texted it, but people on the other side have no idea what is causing the color.

Sosolimited’s team of 10 people are located in Boston and San Diego, and groups of three to four usually work on projects intermittently for months or years, depending on the scope. The company is growing in popularity, and Littman said at one point that they were working on as many projects as there are people on the team. “That was a lot to handle,” she said.

“It’s definitely not healthy,” Thomas joked. “We’re trying to rethink that as we grow.”

Many of Sosolimited’s latest collaborators have been real estate companies, Littman said. Additionally, most of the clients are local. “There’s something nice about being a small studio, working with people who are local,” Littman said. “They like that dynamic of working with a local studio.”

“Boston is a great market for creative work like this,” Thomas added.