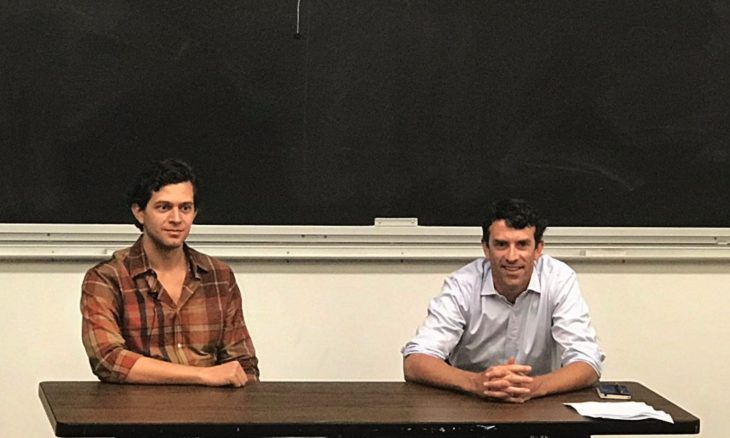 Alex Thompson’s ticket to the grandest show of 2016 came with a VIP pass to the inside of a jail cell. Thompson, a reporter for VICE News who covered last year’s presidential campaign, was arrested two months into the job on charges of trespassing. He’d walked into quite the anti-media crowd at a Trump event in Houston. Thompson’s dramatic entrance onto the political journalism scene was just as characteristic as the elaborate dramatics displayed by the Republican presidential frontrunner.

Speaking to a classroom full of Northeastern University students on October 23, Thompson says last year’s election was more blatantly theatrical than years past because Donald J. Trump knew the part he was playing. 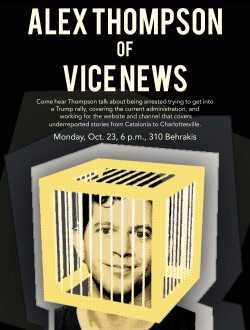 “Trump didn’t ever pretend that this was anything other than the biggest show on earth and that he was at the center of it,” said Thompson. “That ultimately in some ways made a difference. The problem was the media was trying to cover it the same way and it made it harder.”

The media, of course, played a role in this show as well, covering the most compelling and exhilarating parts of the campaign – which were largely centered around Trump’s rallies and provocative statements.

“Trump would say things because he knew it would, a, get the crowd excited and he knew, b, it would get him headlines,” Thompson said. “It definitely was an embrace of the show in a way that we hadn’t seen. I think that was what Trump did. Implicitly, the media was very attracted to anything that was showy and Trump… was like ‘I’m going to embrace what the media wants.’”

When publications fill this role as propagators of sensational events, democracy suffers. In the 2016 election, policy issues were very much put on the backburner in favor of stories about inflammatory material and potential scandals. In fact, “Trump succeeded in shaping the election agenda,” according to recent research from the Berkman Klein Center for Internet and Society.

Thompson pointed out that this especially caused frustrations for Hillary Clinton’s campaign. For example, he mentioned that Clinton and Vice Presidential candidate Tim Kaine went on a jobs tour through most of the Midwest directly following the Democratic National Convention. Very few Americans were aware of this, though, because of highly-publicized drama surrounding Trump’s attacks on the family of a fallen servicemember.

“You’d be completely blameless if you’d never heard of it because that entire two weeks was filled up with Trump attacking the Khan family,” Thompson said.

However, Thompson said, he doesn’t know what the media should have done differently and suggested that anyone who says they do know is lying. “I don’t think anyone knows,” Thompson said. “Part of me wonders if you can really change it unless voters demand it. If voters don’t really care about the issues it’s going to be really hard to make politicians care.”

Thompson isn’t sure Trump will be the only figure who focuses more on the show than the policy. “Is Trump unique in this sense, or is he just the beginning of where we’re just not going to care at all about issues?” he asked the crowd.

Thompson said that what now seems like an endless season of a reality TV show – with a whirlwind of shocking news being trumpeted by outlets almost daily – will probably never stop.

“I’m in the mind that Trump is more of the beginning,” he said.